A cure for one of the world’s deadliest viruses? Experimental drug protects four monkeys from lethal dose of Nipah which kills up to 75% of those who catch it

One of the world’s deadliest viruses can be completely stopped in its tracks by an experimental drug, scientists have claimed.

Four monkeys infected with a lethal dose of the Nipah virus survived after being given an intravenous injection of remdesivir.

However, four green monkeys who were infected with the lethal virus but not treated with the drug died within eight days. 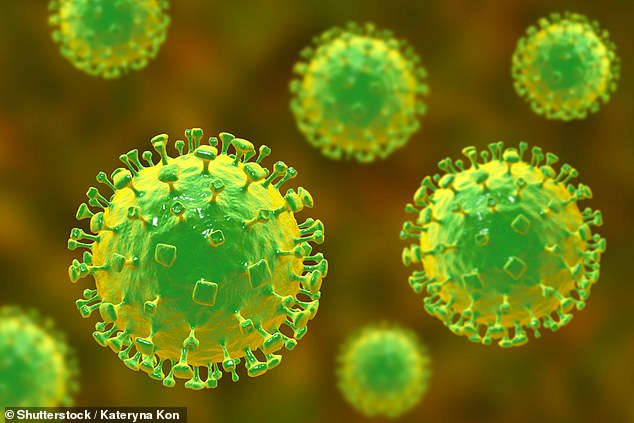 Nipah virus is listed as one of the World Health Organization’s priority pathogens, meaning urgent action is needed against it.

The virus, mainly transmitted by fruit bats but can also be spread between humans, is thought to be fatal in around 75 per cent of cases.

There is currently no vaccine or cure. In severe cases, it can cause acute respiratory illness and fatal encephalitis.

Researchers at the National Institutes of Health, a branch of the US Department of Health, tested remdesivir on eight green monkeys.

All were infected with the killer virus, which was first identified in Malaysia in 1999 during a deadly outbreak among pig farmers.

But only half of the monkeys received the drug, currently being tested against Ebola amid an outbreak in the Democratic Republic of Congo.

WHAT IS THE NIPAH VIRUS?

The Nipah virus (NiV) is a type of henipavirus, which are naturally held in fruit bats.

The virus can cause illness in pigs and humans, and can be spread to humans from animals, infected food and other people with the virus.

Symptoms may appear between five and 14 days after becoming infected, and can last up to two weeks.

They include: fever, headache, drowsiness, disorientation and mental confusion.

Symptoms may progress to a coma, and some patients have breathing problems.

The virus is thought to be fatal in around 75 per cent of cases.

There is no vaccine or cure, but patients may receive supportive treatment to relieve symptoms.

Nipah virus infection can be prevented by avoiding exposure to sick pigs and bats in endemic areas and not drinking raw date palm sap.

They received remdesivir intravenously within 24 hours of being infected, followed by a daily dose for 12 consecutive days.

Virologists led by Dr Emmie de Wit monitored all of the monkeys for three months, and took samples at regular intervals.

Two of the green monkeys given the drug showed no signs of illness throughout the duration of the study.

However, the other two developed mild respiratory illnesses – symptoms of the virus – that resolved within three weeks.

All four untreated monkeys did within eight days of being infected with the Nipah virus, after showing signs of illness from the fourth day.

The trial of remdesivir, the second experimental Nipah virus treatment, was published in the journal Science Translation Medicine.

The only other weapon scientists have in their arsenal against Nipah is a monoclonal antibody that was tested during an outbreak in India last year.

Some 21 deaths and 23 cases were recorded during the outbreak in Kerala, in the south west of the nation, last May.

Dr de Wit and colleagues now plan on testing whether remdesivir will work for patients who have been infected for longer than 24 hours.

He told the New York Times: ‘The average person who reaches a hospital dies within two days, so it’s hard to protect them once they’re infected.’

Remdesivir, also referred to as SC-5734, is made by Gilead sciences, a Californian-based pharmaceutical giant.