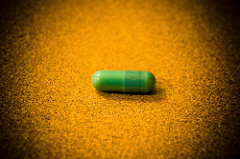 In recent years, there has been an escalating concern over the growing resistance of many germs to antibiotics. Penicillin is no longer effective against a number of pathogens. Vancomycin, has long been considered the best weapon against bacteria no longer vulnerable to other drugs. However, it too, is losing its effectiveness. According to experts, almost every human infection (i.e. malaria, tuberculosis, gonorrhea, pneumonia, leprosy, etc.) is now resistant to at least one major class of antibiotics, and the situation is expected to worsen.

Methicillin Resistant Staphylococcus Aureus (MRSA) one of the most notorious antibiotic-resistant strains of bacteria has been wreaking havoc throughout communities all over the world. In fact, the FDA has recently announced that there are more people dying of MRSA in the U.S. than of AIDS, raising it to epidemic proportions. To make matters even worse, some experts are now predicting that there will be an emergence of new strains of antibiotic-resistant bacteria in the future.

There is, however, a solution and it comes in the form of a 3000 year old wound remedy…honey. Honey’s effectiveness in suppressing microbes is very different than that of antibiotics. Therefore, antibiotic resistance is less likely with honey. Most microbes need moisture to sustain life. It is, therefore, difficult for microbes to develop resistance to the moisture-extracting properties of honey. Much of honey’s antimicrobial activity is bacteriostatic (freezing the bacteria in time and preventing them from spreading) rather than bactericidal or killing the bacteria. Resistance by bacteria is more likely to happen in an agent that kills them (as in the case with most antibiotics) because the few surviving bacteria (and there are always a few) pass on their resistant genes to future generations. To date, no resistance of pathogens to honey has been reported. This is being viewed as an extremely important medical discovery.

Over the past 30 years, antibiotics have been grossly over-prescribed by medical professionals. This overuse of antibiotics is partly due to patients demanding an easy fix, and to pharmaceutical companies promoting that easy fix. The problem is that many antibiotics are indiscriminate killers. When taken orally, they kill all the flora in the gastrointestinal tract, both good and bad. Such indiscriminate killing can throw the whole system off balance. The body contains beneficial microbes that are important for sustaining good health. However, these microbes are less affected by honey than they are by most antibiotics.

As of late, the medical industry has been taking a closer look at honey as a viable alternative to antibiotics in the treatment of many maladies. Not just any honey will do though. Manuka Honey seems to contain more antibacterial properties than any other type of honey. Manuka Honey is produced by bees that feed on the nectar of the flowers that grow on the Manuka Tea Tree, indigenous to New Zealand. This bioactive, medical-grade honey has been proven to destroy infectious bacteria that are responsible for many different types of health complications, including bacteria that has shown a resistance to antibiotics (such as MRSA and VRE).

“Manuka Honey is being considered a shining beacon of hope for medical professionals who have been scrambling for a solution to antibiotic resistance,” says Frank Buonanotte, CEO of Honeymark International which is a manufacturer of skin care products that contain active Manuka Honey as a healing agent. “Unlike antibiotics, Manuka Honey has been found to have no negative side effects when used for therapeutic purposes, making it an extremely valuable commodity in the medical field.”

Read More:  Is microdosing LSD a solution to the ‘crisis of meaning’ in modern life? New Canadian study may provide answers

For more information or to purchase Manuka Honey or Manuka Honey products, call 1-866-427-7329 or visit http://www.HoneymarkProducts.com