Picture a 23-year-old woman dancing on a table in a Manhattan bar on, say, a Thursday night. Around 11 p.m., she says her goodbyes and rushes to Penn Station, so she can make the 11:38 p.m. train to Short Hills, N.J., where she is living with her Italian mother, who doesn’t know how to drive or write checks.

Her father was recently killed in a car accident, and so this young woman has become her mother’s protector. Despite staying out late, she rises early the next morning to catch the train back into the city, where she works as an editorial assistant at Golf Magazine.

But she misses the train, and instead cries with her mother at the kitchen table, chain-smoking Marlboros while the dog sits at their feet.

The story encapsulates Lisa Taddeo’s early 20s. “It was kind of like the juxtaposition of ‘I’m fine! Look at me, I’m fine. I’m on a table! I’m dancing to the Talking Heads!’” Ms. Taddeo, 39, said. “And then coming home and being what I really was, which was the personification of fear. And pain.”

Ms. Taddeo, who is now married and has a young daughter, is the author of “Three Women,” a reported piece of literary nonfiction on the subject of female desire. It comes out July 9, and advance copies have garnered praise from some big names.

Elizabeth Gilbert, the author of “Eat, Pray, Love,” compared it to “In Cold Blood” by Truman Capote. Katie Couric is hosting a book party to celebrate its release. 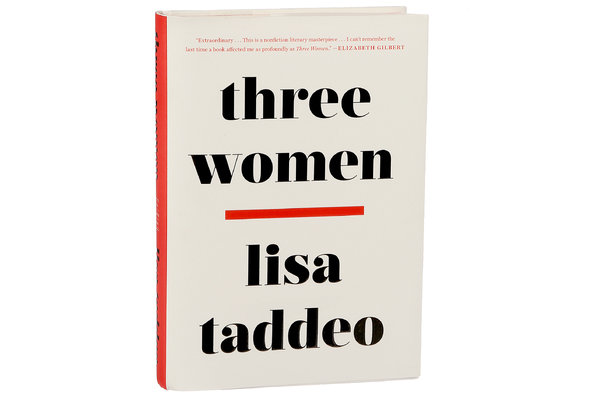 “Three Women” follows the sex lives of three American women (two are given pseudonyms), exploring the moments of passion that altered their lives. There’s “Lina” an Indiana woman who embarks on a life-changing affair with her high school boyfriend; Maggie, a North Dakota woman now in her late 20s who, when she was a high school student, allegedly had a relationship with her married English teacher; and “Sloane,” a New England restaurateur whose husband enjoys watching her sleep with other people.

The book excavates their upbringings to form three profiles of why these women want what they want, how they became the people they are today and how, consciously or not, they walk the delicate line between sexual subjugation and liberation. Ms. Taddeo said she spent eight years reporting it and drove cross-country six times to interview hundreds of women, eventually settling on the final three.

In the process, Ms. Taddeo began to reflect on her own story. “I got very intrigued by women’s desire, by my own, what I’d done,” she said. “These women had given their whole stories to me and to the world. And I felt like it was only fair that I put myself in there — to some extent to be like, ‘I’m this, too.’”

On a recent Friday afternoon, Ms. Taddeo arrived for lunch at Osprey, an upscale restaurant in the Dumbo section of Brooklyn, wearing a camel coat, button-up shirt, velvet pants and riding boots, looking as if she had stepped out of an Anthropologie catalog. She and her family were in town for a McSweeney’s magazine party and had a room at the 1 Hotel upstairs.

Ms. Taddeo said she first became interested in the subject of desire by watching her parents interact. Her father, Peter Taddeo, was an Italian-American who grew up in New Jersey and attended medical school in Bologna, Italy, where he met her mother, Pia, a gorgeous fruit stand cashier with a fifth-grade education.

“My dad serenaded my mom outside her window with an old radio, which I always loved the idea of,” Ms. Taddeo said.

In Italy, her mother gave birth to her older brother, and the family moved back to New Jersey, where her father opened a family medical practice. As she grew up, her father’s desire for her mother was noticeable. “I was always sort of icked out by it, like any kid would be,” she said. “But I think that made me interested in men and the way they sort of needed what they wanted.”

When she read James Salter and Norman Mailer, she gained a new perspective on her parents. Men, she writes in the prologue of “Three Women,” do not question their desires or brush them aside, whereas women subvert theirs daily or even hourly.

Sometimes, it seemed her mother did not have desires of her own. “My mother was very beautiful,” she said. ”She was sensual but not sexual, and so I was always very intrigued by how that worked.”

As Ms. Taddeo spoke, something out the window caught her eye — her husband walked by with their 4-year-old atop his shoulders — and she lost her train of thought.

She recalled that she was 17 when she had her first serious boyfriend, a classmate from Millburn High School she described as a bad-boy type who smoked cigarettes in the parking lot.

Read More:  Is Accutane Right For Me?

Since she had a boyfriend, she did not participate in the hookup culture at Rutgers. “One time, after a frat party, my friend said she slept with a guy in his weird bed that was built into the wall, like a horizontal drawer-closet,” Ms. Taddeo said. “I thought of that for a long time, that I had missed out on frat closet sex.”

In 2003, a week before her father died in the car accident, she broke up with her boyfriend (they remain close friends). “I don’t remember who I was, but whoever I was, was grateful for him,” she said, describing the following year as a black time. “I had all these dreams of being a writer, but everything took a back seat to grieving.”

Eventually, her career took shape. She landed an editorial assistant job at Golf Magazine, even though she knew nothing about golf. It was her first taste of the magazine world. She commuted from New Jersey to the Golf offices in Manhattan, while also writing articles for New York magazine and Esquire.

By 2008, she was making a name for herself writing about celebrities, including a saucy profile of Jessica Simpson and a piece of fiction imagining Heath Ledger’s last days. But death interjected again. Shortly after her Heath Ledger piece was published, her mother was diagnosed with lung cancer, and soon died.

“When my dad died, the person I was up until then died,” Ms. Taddeo said. “And when my mom died, I was already dead, so I didn’t need to die again.”

After selling her mother’s house, she moved into a studio apartment on Wall Street. “I had crippling anxiety where I wouldn’t leave the apartment for days,” she said.

It took a while, but she started dating again. There was an Irish soccer player whose charm wore off after a few weeks, and a film producer who told her, “Let’s go to the airport, let’s go to Paris,” the night they met.

“I think I started looking for love or death,” she said. “For something to save me or something to kill me. And Manhattan is kind of perfect for that.”

In 2010, a profile she wrote for New York magazine on Rachel Uchitel, a woman who was implicated in the Tiger Woods sex scandal, caught the attention of Jofie Ferrari-Adler, a book editor. He approached her with the idea of doing an updated version of “Thy Neighbor’s Wife,” Gay Talese’s 1981 study of the sexual revolution in America.

Read More:  WIN entry for you and three friends to Gaelforce 10k Kippure

A friend suggested she sleep her way across the country, but that idea repulsed her. “Sex without the sort of deep connection, it’s not for me,” Ms. Taddeo said. “When it’s not real, it feels silly at best.”

Instead, she packed up her things into her father’s lavender Dodge Stratus and drove to surf bars and barbecues, beaches and casinos, from San Diego to Charleston, S.C., looking for people willing to open up about their desires.

In 2012, after Ms. Taddeo’s first road trip, she wrote an article for The New York Observer about a New York real estate broker named Cawsey, who was homeless. He had a son named Jackson Waite, a screenwriter who lived in Los Angeles.

“His dad made him ask me out, it was so silly,” she said. “I told my friends, and they were like, ‘You’re going on a date with the homeless real estate broker’s son?’”

They met for drinks at Tribeca Tavern and began dating almost immediately. For the first time in a while, her anxiety started to subside. “I think that’s one reason, too, that I wanted to be with him,” she said.

Ms. Taddeo invited him to join her on her next road trip, a few months later. “He took a rather large leap of faith and said he thought I was going to be great or something,” she said.

While they were in Whitefish, Mont., she learned that she was pregnant. The couple decided to have the baby, but Ms. Taddeo suffered a violent miscarriage. “The pain of giving birth to something that is not going to live is wild,” she said. “It makes you feel bad for being alive.”

The miscarriage changed the trajectory of her book. “It probably was one of the biggest things that made me want to focus just on women, because of the ability to bear children and lose them,” she said.

The couple moved to Bloomington, Ind., to be near a clinic researching sexuality. One night, at a women’s support group that Ms. Taddeo started, she met her first subject: Lina, a Catholic woman in a sexless marriage who had been sleeping with her high school crush. The book began to take shape.

So did her personal life. After dating for a year, Mr. Waite proposed to her in Venice, Italy, outside of Harry’s Bar. They got married in 2014 in Martha’s Vineyard and now live in a two-bedroom farmhouse in Litchfield County, Conn., with their daughter.

As Ms. Taddeo nibbled on her seafood Cobb salad, her daughter bounded into the restaurant and jumped onto her lap. “Can I have one kiss? And then go back to Daddy?,” Ms. Taddeo said.

Mr. Waite followed closely behind. Since she started promoting her book, her husband has taken the lead on child care. “Sorry to interrupt,” Mr. Waite said. “She had to say ‘I love you’ before her nap.”