Gary Schwitzer is the founder and publisher of HealthNewsReview.org.  He authored the Statement of Principles for the Association of Health Care Journalists in 2004. He tweets as @garyschwitzer or as @HealthNewsRevu. 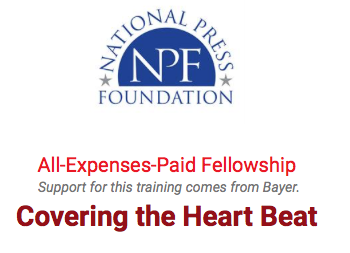 Two months from now we will be in mid-winter, late January.

But how troubling.  Once again.

An email was sent to journalists this week announcing this junket funded by Bayer, a multinational drug company.  Bayer markets a number of cardiovascular drugs – and cardiovascular disease is the topic of this Florida fellowship.

HealthNewsReview.org has been the only publication to consistently criticize this practice. We have written many times* in the past decade about the ethical problems with, and conflicts of interest inherent in, continued National Press Foundation (NPF) fellowships or training offering such junkets using industry funding.

NPF has always said that the criticism is off-base because NPF is “solely responsible for programming and content.” Even if NPF chose the topic, it’s a topic that is conveniently comfortable for a drug company sponsor with cardiovascular drugs in its product line.  Even if journalists who’ve attended these events in the past say that they didn’t see a conflict and didn’t perceive any sponsor influence, the fact is that many journalists will have accepted industry money to attend.

Two items stand out on the NPF website in the section on sponsorship:

The sponsor(s) will be invited to address the journalists at the start of the program, welcoming them and explaining why they chose to sponsor this program. …

So the sponsor clearly gets something out of its investment – insight into what is on journalists’ minds.

It’s noteworthy that some of the best health care journalism at this time is reporting that discloses and criticizes physicians’ acceptance of industry money.  The NPF fellowships, on the other hand, lure journalists to attend events that are funded by industry. It appears that when the shoe is on the other foot, the ethical concerns seem to disappear for some. The disconnect could not be more clear.

For reaction, I turned to a couple of colleagues with whom I help maintain a List of Industry-Independent Experts for journalists to use to avoid reliance on conflicted sources.

Shannon Brownlee is senior vice president of the Lown Institute. But she also had a distinguished career as a senior writer at US News and World Report and Discover Magazine, and was named one of “four writers who changed the world” by the World Congress of Science Journalists..  She wrote to me:

Journalists will complain that the only way they can afford to go to such a workshop is if somebody underwrites it. There’s a simple solution: don’t go. It’s not worth your time and there is no way that the industry is doing this without some expectation of a quid pro quo. You might even call it bribery. Either that or it’s an attempt to improve the company’s image. Journalists will also claim that they make up their own minds, and who sponsored the event doesn’t have an effect on their reporting. Tell me another fairy tale.

And who supports the NPF? Out of 34 industry sponsors, health care companies account for seven.  So please don’t try to argue that this is a “pure” journalism event, because the NPF is never going to bite the hands that feed it.

Jeanne Lenzer is an independent medical investigative journalist and author and a longtime contributor to The BMJ.  She wrote to me:

Industry only donates money when it can expect a financial return on investment – it’s called “strategic giving”. For more on that see: The Human Toll of the Medical Industry’s Uncharitable Giving.  The calculus industry conducts on their “investments” is fine-tuned to before-and-after-investment sales and is abandoned if returns aren’t realized. The practice of journalists accepting industry funding directly or via their organizations should be eschewed. For more on Bayer and its manipulation of public opinion via “journalists” read today’s Guardian article: Revealed: Bayer AG discussed plans to give not-for-profit funding for influence. 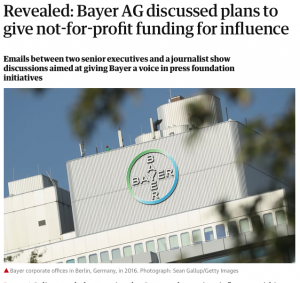 Readers are encouraged to read that full Guardian article for its timeliness and relevance to this discussion. It is connected to the topic of this post – attempts by industry to gain influence on journalism on topics relevant to the sponsor’s goals. There is also a very relevant discussion of the role of journalism associations or foundations in such arrangements.

Read the Association of Health Care Journalists Statement of Principles

Excerpts of this statement of professional responsibilities are relevant to this discussion.  Excerpts:

We should strive to be independent from the agendas and timetables of journals, advocates, industry and government agencies.

We must preserve a dispassionate relationship with sources, avoiding conflicts of interest, real or perceived.

Deny favored treatment to advertisers and special interests and resist their pressure to influence news coverage.

Weigh the potential benefits involved in accepting fees, honoraria, free travel, paid expenses from organizers of conferences or events against the desire to preserve our credibility with the audience and the need to avoid even the appearance of a conflict of interest.

I have sought other reactions to the latest NPF fellowship offer and may add other perspectives as I collect them.**

* Our past articles about this National Press Foundation practice

Pfizer – a Pfriend of Journalists?

Here we go again with Pfizer-funded cancer seminar for journalists

Is it OK for journalists to attend Bayer-funded training on new cancer treatments?

** Additional perspectives arriving via email after this piece was first published:

Christopher Labos, MD, cardiologist, Office for Science & Society, McGill University, and one of our editorial reviewers in the past:  “I think we have to be mindful of conflict of interest. The public is becoming less and less tolerant of people having ties to industry. It’s hard because funding is increasingly scarce and it’s very hard to organize educational activities without some sort of external funding source. When that external source of funding causes a conflict of interest, I think the bad outweighs the good in that circumstance.  We all think we can’t be influenced, that we can be independent minded.  But the truth is we can all be influenced, even if just in subtle ways, so conflict of interest is something we have to be hypervigilant about.”