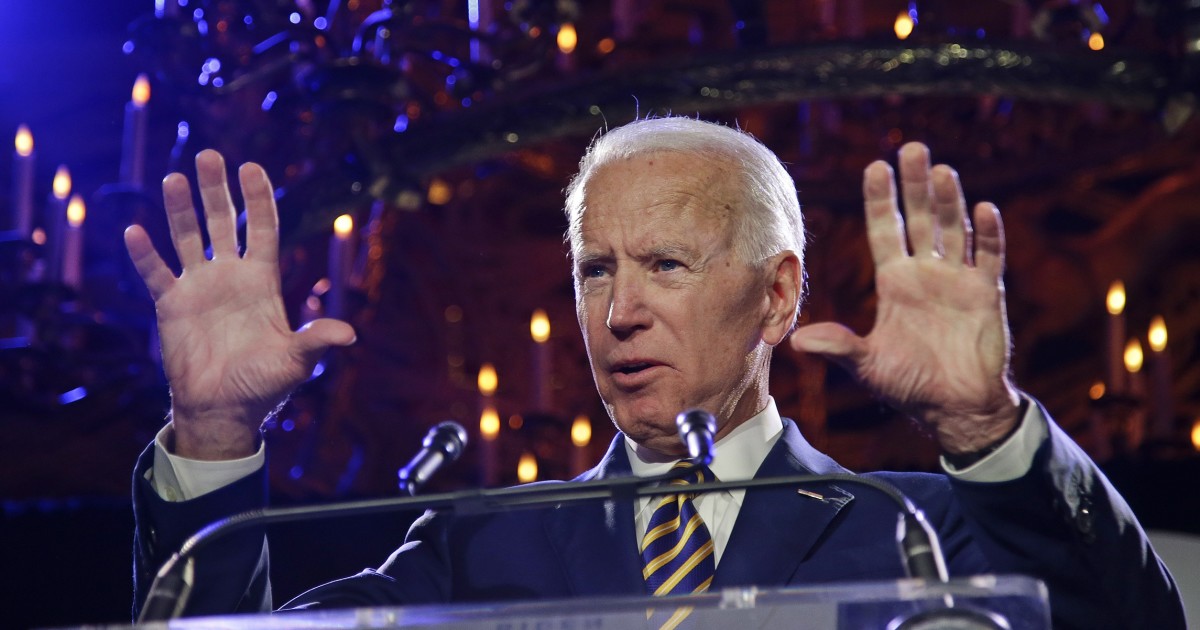 The health of the economy was President Trump’s best argument for reelection just a month ago, but now, in the chaos generated by the coronavirus pandemic, Democrats see it as a weakness to be exploited.

With unemployment soaring and businesses shuttered, Democrats have a new opportunity to attack Trump for what was once his greatest strength. Even if Trump is able to convince voters in the months ahead that he’s handled the public health response to the pandemic properly, he faces the risk that Democrats could successfully blame him for the ensuing economic misery.

A slim majority of people, 52%, still approve of Trump’s handling of the economy thus far, according to the RealClearPolitics average of polls. Yet former Vice President Joe Biden is currently beating Trump in head-to-head polls by 6 points.

“Trump created a fragile economy that was especially vulnerable to the coronavirus outbreak,” said Democratic National Committee spokesman Daniel Wessel. “And his mismanagement of the crisis has severely worsened the pandemic’s impact on our economy.”

In recent TV appearances, Biden, the presumptive Democratic nominee, has also directly tied the coronavirus’ health ramifications to its economic damage, framing them as interconnected and blaming both of them on Trump.

“The administration’s failure to plan, to prepare, to honestly assess and communicate the threat to the nation led to catastrophic results,” said Biden in his plan to reopen the country from the virus, “the American people have already paid too high a price in illness, death and economic loss.”

“When Joe Biden sounded the alarm about this outbreak, Donald Trump was downplaying the threat we faced and disregarding warnings about the most severe public health crisis in generations,” said Biden spokesman Andrew Bates.

“Now we have more coronavirus cases than any other country, and we’re losing jobs at an historic rate,” added Bates.

Biden and other Democrats will frame the argument against Trump as one of filling a void when it comes to economic leadership and by offering to instead provide functioning, pragmatic governance that is currently missing, Biden’s former economic adviser Jared Bernstein said.

“We need an economy that is insulated from the economic shocks that come fast and furious. We need a larger government role in healthcare, more robust unemployment benefits, environmental protections,” Bernstein said. “These are all policy measures that Biden is familiar with and supports.”

Mathew Littman, a former Biden speechwriter and the executive director of a new, pro-Biden super PAC, Win the West, said that before the pandemic struck, the only achievement Trump had going for him was the state of the economy.

“We all knew he couldn’t lead during a crisis and this has proven that. He’s not helping in this situation. Democratic messaging will now be that he failed in every area you would expect from a president, including the economy,” said Littman.

“What’s left? He had lunch with Kim Jong Un, that was the only decent thing that happened under his watch,” said Littman.

Littman also said it was embarrassing that Trump wasn’t interested in negotiating the economic relief packages that Congress has passed in quick succession in the past few weeks. Treasury Secretary Steven Mnuchin has been leading the negotiations on behalf of the administration, while Trump himself has taken a backseat.

“How can the president say he wants to be the cheerleader for the country, not the quarterback?” said Littman, referring to Trump’s recent comments regarding his role.

Besides drawing a contrast between Trump and Biden’s leadership approach when it comes to handling the health and economic challenges of the pandemic, Democrats say they will highlight Trump’s economic track record pre-virus.

In a memo released in early April, the DNC said the coronavirus pandemic was hurting sectors such as U.S. manufacturing, the retail industry, and farmers, which “were already stretched to their breaking point by Trump’s reckless trade policies and broken promises.”

The memo also advanced the argument that Trump’s economic policies were built on “shaky foundations of short-term stimuli and corporate debt” and led to inequality becoming much worse.

“Trump in his boasts about the economy was talking past what people felt themselves, what was happening to them personally,” said a senior House of Representatives Democratic aide. “Many Americans had a serious vulnerability, which is their family budget. Most people aren’t watching [CNBC’s] Mad Money.”

Bernstein added that one of the GOP’s greatest vulnerabilities politically is its attitude to healthcare, which has historically emphasized free markets, rather than expanding coverage. This, Bernstein said, was an out of touch approach. He also said that people in states that did not accept the expansion of Medicaid that Obamacare provided for were more likely to be caught in a gap economically during the coronavirus due to increased healthcare costs.