Gary Schwitzer is publisher & founder of HealthNewsReview.org.  He tweets as @garyschwitzer.

The title of the article that appeared in the Annals of Internal Medicine was too tempting for many journalists – “Blindness Caused By A Junk Food Diet.”  It was an article about the experience of one teenage boy.

Stories were rushed to publication by CBS, TIME, NBC, USA Today, The Guardian, WebMD, Newsweek and countless other news organizations. Most news stories treated the single case report as slam-dunk solid proof of a cause-and-effect relationship between junk food and blindness in one teenage boy.  It was, in fact, far from that.

The journal labeled the article as a “letter”…an “observation”….a “case report.” 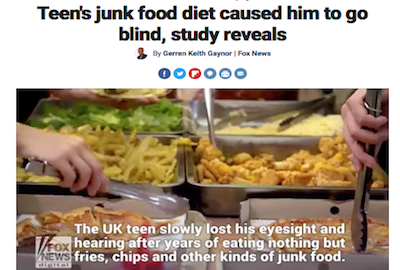 Fox News called it a “study” and referred to the teenage boy as “the study subject.”

That’s a stretch.  Not everything published in a medical journal is a study.

NPR had solid input from an independent expert:

“It’s intriguing,” say Allen Taylor, the director of the Nutrition and Vision Laboratoryat the Jean Mayer USDA Human Nutrition Research Center on Aging at Tufts. “But it’s important to remember it’s a study of only one case with very limited information in it,” Taylor says.

Tom Sanders, a professor of nutrition and dietetics at King’s College London, was critical of the case report, saying it relied on the patient’s own recall of his eating habits and did not take into account other possible explanations for the condition, including genetic defects or environmental exposures.

But that input also raises questions about why this was newsworthy.

Chioma Ihekweazu, PhD, earned her doctorate in health communication with a research focus on examining trends in nutrition news coverage.  She has contributed to HealthNewsReview.org in the past.  I wanted to hear her perspective:

The link established here is tenuous because the patient didn’t keep any type of food record. The researchers based their diagnosis on the patient’s descriptions of the types of foods he ate over several years. Dietary recall is notoriously unreliable when asking people to remember what they ate beyond the span of a few days, let alone several years.

Additionally, environmental exposures and other lifestyle factors that could have contributed to the patient’s vision loss were left largely unaddressed. The authors reported that the patient denied use of alcohol, tobacco, or other drugs but teens aren’t always forthcoming about their substance use, especially in the presence of their parents.

What we’re left with is a particularly dramatic example of the consequences of a poor diet based on a single patient and a lot of speculation.

Another of our past contributors, Yoni Freedhoff, MD, is an assistant professor of family medicine at the University of Ottawa, where he’s the founder and medical director of the Bariatric Medical Institute.  He wrote to me:

In my opinion, the child in question very likely has/had avoidant/restrictive food intake disorder and isn’t simply a fussy eater, and any diet, including non-junky, that was deficient in B12 and folate could have led to the same outcome.

Consequently it’s not a “junk food makes you go blind” story, but rather a story about missing and failing to manage an important diagnosis.

Seeking independent perspectives on such stories is critical to help journalists – and their readers – to understand what is newsworthy and what isn’t.

The Annals of Internal Medicine itself could have helped improve the ensuing journalism if it had included some guidance about the limitations of single case reports as it sent out its news release about the article.