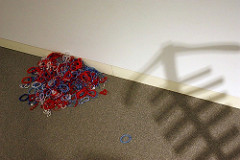 When you mention the words ‘blood disorder’ most people immediately think of haemophilia, which is predominantly a male condition. Thanks to advances in medicine over the past few decades it is now recognised that women do suffer in significant numbers from related problems.

In the UK alone an estimated 250,000 women have a bleeding disorder and may well be unaware of it. This number rises to 2.5 million in the US.

The obvious manifestation of an underlying problem in women is in their menstrual cycle. Most attribute heavy bleeding at the end of their cycle to something they have to put up with. Women suffering with these problems tend to accept it as ‘par for the course’, in spite of the fact that it can blight their quality of life every month and quite literally make them ill.

This article raises awareness of the types of blood disorders, the typical symptoms, their causes, potential treatment and where to go for help if you may be affected by any of the issues raised here.

If you think you may have a problem, this is what to look out for:

Heavy periods (referred to as menorrhagia)
Frequent nosebleeds
Bruising
Cuts that take a long time to stop bleeding
Bleeding heavily after childbirth
Gums that bleed regularly and heavily, whether spontaneously or after dental treatment

Most people will not realise they have a problem until they have a serious injury, surgery, dental work or possibly after childbirth.

Blood disorders are either inherited or acquired, the latter can be the result of medical conditions such as kidney problems or the result of certain medicines you may be taking.

Read More:  How much do horse antibiotics cost

There are a number of types of blood disorders, including platelet function disorders. The most common appears to be Von Willebrand’s disease which affects 1% of the population in the UK for example.

If any of this sounds familiar and you are concerned about any symptoms you may have, your doctor should refer you to a haemotologist to get checked out through a series of blood tests.

Continually heavy bleeding during a period may also cause anaemia which is characterised by feeling very tired, looking pale and becoming breathless even with little exercise. Anaemia is the lack of red blood cells or haemoglobin in the blood. It can be normally be rectified through a combination of tablets and a diet rich in iron, such as green vegetables, red meat, dried fruit and pulses. Vitamin B12 is also a good source and can be found in milk, cheese and eggs. In extreme cases of anaemia Vitamin B12 injections may also be given.

Treatment for bleeding disorders varies widely depending on the severity of the disorder. Mild disorders can be managed with medication in the form of tablets, nasal sprays or injectable medication as required.

Where to Go for Help – Useful Websites

Please see below for useful website links for advice and where to go for help if you are affected by any of the issues in this article.

So essentially, if you believe you or a friend, loved one or colleague may have any of these symptoms, please get checked. It can literally be a life saver in severe cases but at the very least it could improve your quality of life on a permanent basis

Read More:  Kolkata – That Perfect Trip To The City Of Joy