It’s no surprise that actors have to work hard to get into superhero shape before a movie, and it was no different for Captain Marvel ‘s Brie Larson.

The star had to undergo an intense training schedule to get ready for the new movie, from lifting a Jeep to weighted pull-ups.

Brie Larson has shared some of her impressive athletic feats on her Instagram meaning we could all get our superhero swagger on and try these out, after we check with a professional first, of course.

The actor went through nine months of training for the role, so it’s not an easy route.

By the end of the nine months Larson could deadlift 225 pounds, do box jumps above her waist height and push-ups with a chain around her centre.

The movie is already winning fans, not only because it’s the first female-led superhero film under Marvel ‘s belt, but because it’s just great fun.

If you watched it, or are just wondering what on earth Larson, 29, did to get in shape, here’s a look at her intense regime with a few tips for trying it at home.

Brie lifted a 5000lbs Jeep, with a full tank and driver for a minute.

The LA Times shared her workout in three parts.

The first three months were based on foundational training , this was before Avengers: Endgame filming.

The next three months were when she was filming Captain Marvel between Atlanta and LA, you can see her training below.

The last three months was the Marvel training , that’s technical work for stunts and fights.

Larson also shared five moves , which you can do at home, to get in Captain Marvel style shape.

Read More:  Walgreens CEO: We’ve Got More Work To Do In Tough Environment

Beginner: Lie on the floor, knees up and lift your hips to the ceiling 15-25 times.

Beginner: Can’t do one? Neither could Brie at first. With a pad beneath you, extend your arms and slowly lower your body. Once your chest touches the pad, drop your knees. Do the reverse.

Super: By the end, Brie could do push-ups with 50-pound, weighted chains on her back.

Beginner: Take a knee, with your left knee touching the ground and your right leg in a forward lunge. Raise yourself up and then lower yourself back down. Switch sides.

Super: Brie eventually did these with 60-pound dumbbells in each hand or 120 pounds total.

Upper-body strength was critical for Larson’s stunts, like rope swings.

Beginner: With the help of a partner, jump to the top of the bar. Lower yourself with control and repeat.

Super: Brie couldn’t do any before, but take a look at this.

It all got a bit life imitating art when Larson tried the fifth move, pushing a car!

The 5,000lbs Jeep had a full tank and a driver inside to steady it.

That moment started with a drill anyone can do from home. Stand with your arms extended against a wall and push into it as you run in place.

Training outside the gym

It wasn’t all working out in the gym for Larson, she kept up the pace outside too. Her Instagram shows us she mixed it up with dancing, rock-wall climbing and boxing.

The idea is to keep it varied, which helps both mentally and physically.

The end result is a more well-rounded workout, which means your more flexible as well as less likely to get injured. Mentally, it also breaks up boredom.

The man behind it was Jason Walsh, C.S.C.S., NSCA-certified personal trainer, founder of Rise Movement and Rise nation in LA.

He has previously also trained Emily Blunt for Edge of Tomorrow and Bradley Cooper for American Sniper.

Larson was inspired by Blunt and sought out tips to get the same look.

“Using my body as a tool that can do incredible things was the beginning of unlocking myself & who Captain Marvel is,” Larson said.

The first thing Walsh said though? Don’t try and get a look, have goals.

Walsh created the training programme on Playbook App so people could see what was involved.

It was all based off a long game strategy. Larson was built up first by looking at the basic skills and nailing the movements, it was the next three months that were intense .

Larson spent about 12 hours a week in the gym, two-a-day four times a week as part of that, and an hour session two days a week, there was a rest day in there too. 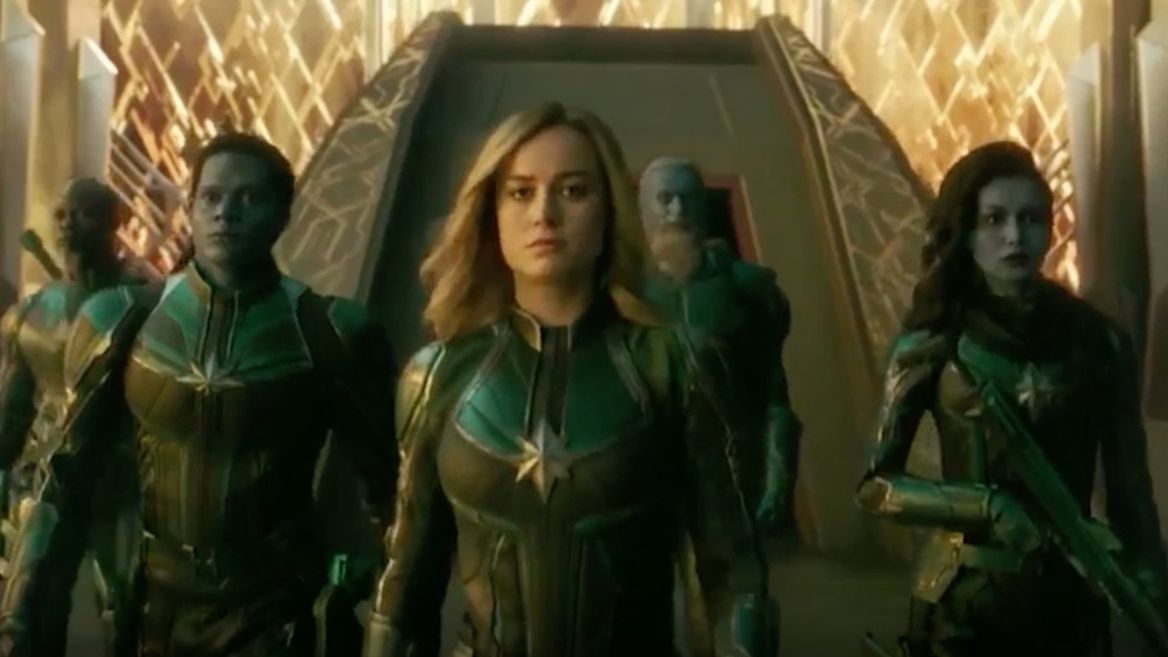 Have you tried the five basic home workouts? How did you get on? Let us know in the comments below.