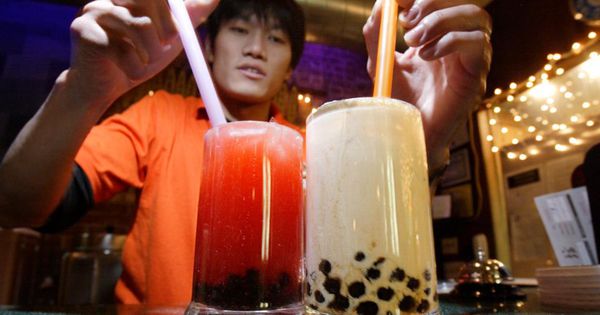 Bubble tea has become a popular drink around the world. (AP Photo/Gregory Bull)

It takes balls to drink bubble tea. That’s why you want to be a bit careful about drinking this popular drink.

As reported by Shaoxing News, a news outlet in China, on May 28, a 14-year-old girl visited the Zhuji People’s Hospital emergency room in the Zhejiang province in eastern China, after suffering five days of constipation and abdominal pain. The picture in the following Tweet shows what doctors found when they imaged her abdomen:

A teenager addicted to bubble tea was left in agony after more than 100 bubble tea “pearls” accumulated inside her! https://t.co/vtgT3sU4Ny pic.twitter.com/qSHdXEEaTW

Yes, those are over 100 undigested bubble tea balls or pearls or bobas or whatever you want to call them, clogging up her intestines. As Kimberly Foo reported for Asia One, the teenager claimed that she had “only drank a cup of bubble tea five days before this incident.” If that had been the case, it would have been a pretty cup of bubble tea. The physician who treated her, Dr. Zhang Louzhen, suspected that she had been surreptitiously drinking a lot more bubble tea over a longer period of time to get this many pearls to accumulate in her intestines. Nevertheless, it all worked out in the end as laxatives helped her pass the boba.

Of course, the question that may be bubbling inside of you is whether the same thing could happen to you, if you are a member of the bubble tea party, so to speak. The drink, which originated in Taiwan, has become increasingly popular around the world. Bubble tea pearls typically consist of tapioca starch, but may have other added ingredients as well such as guar gum give them their texture, consistency, and color. Since there is no bubble tea master who oversees bubble tea preparation around the world, what goes into the tea could be quite variable.

Preparing the drink in the store involves dumping these pearls into a container and then pouring cold black or green tea over them and adding flavorings like fruit juice or puree.  Typically, you will get the tea in a plastic cup or glass accompanied by a rather large and wide straw. The wide straw allows you to suck up both the tea and the pearls at the same time. Of course, before drinking the tea, you have to take a picture of the tea or better yet a selfie with you and the tea and post it on social media to show others that you are living the life. Then you can start to suck.

The question is whether you could suck too much, bubble tea pearls, that is? Well, starch is not necessarily the easiest thing to digest. In theory, they could stick together and form rather difficult to pass blobs, especially when other ingredients are making them thicker and sturdier. Therefore, you probably want to moderate your bubble tea intake.

Moderation is important not just for the balls but also because bubble tea is not exactly asparagus or kale. True, the tea part can have various antioxidants, such as polyphenols, that may help reduce inflammation and tissue damage. However, bubble tea can have a lot of added sugar and be calorie bombs. There also may be artificial ingredients , depending on what types of pearls, puree, and condensed milk are added. Again, preparation and ingredients can be highly variable. Treat bubble tea more as a dessert treat rather than a healthy item.

You may want to pay closer attention to the tapioca pearls while drinking bubble tea. (Photo: Getty Images)

Another precaution to take is to chew the pearls before you swallow them. Doing so can make them more enjoyable because they can squirt out tea. In other words, you can have more of a ball. It also can make the pearls more easily digestible and reduce any type of choking risk.

Of course, what happened to the 14-year-old girl in China is likely an isolated case. You don’t hear of masses of bubble tea drinkers descending on doctors offices and emergency rooms, complaining of constipation. Searching PubMed for “bubble tea” returns just 15 items, including a case of a bubble bath burn and something about tin bubble pots, but really nothing that quantifies the risks of drinking bubble tea.

Therefore, just be smart about your bubble tea consumption. Don’t overdo it. Pay attention to what goes into the drink. And keep your eyes on the balls.

Read More:  What happened to quit smoking message board