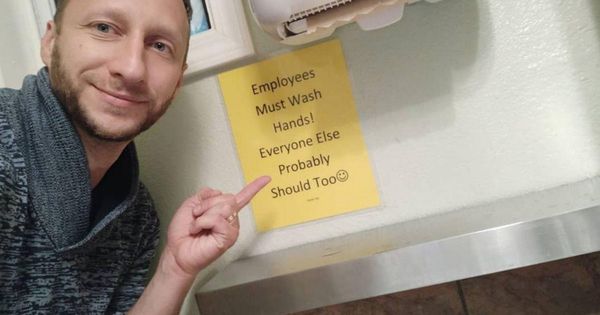 The idea for this article germinated in a restaurant bathroom.  Before my meal arrived, I went to the men’s room and saw one of their employees leave a toilet stall and just walk by the sign we all know from public establishments: “Employees Must Wash Hands Before Returning to Work.”

Talk to the hand.

Well, he didn’t wash his hands, and during my meal I wondered how actively involved he was in the preparation of my food.

As health and hygiene become, at least in some places, more advanced and efforts to increase environmental sustainability rise, I wondered who was doing interesting things in this space.

Paired with a relatively new awareness among Israeli techies and investors that social entrepreneurship is more than just a means for economic progress across emerging markets, some Israeli companies seek to make it core to their technology.

As Neta-Li Meiri, Managing Director of 8200 Impact explains, “Technology is developing at a rapid rate with unbridled potential for societal change. By focusing on net productivity and advancement, we hold the ability to close the gap between developed and developing nations through technology to bring basic necessities (food, water, and healthcare) in the most efficient way.”

Here’s an example of how one company can make a massive impact, utilizing computer vision software embedded into its hardware.

SoapyCare is a hygiene company that utilizes AI to produce data and insights from that most important of human activities, one without which civilization could not advance:  washing your hands.

SoapyCare makes and installs Internet-connected hand washing units that recognize the person standing in front of them. This could be kitchen workers, customers, waiters, cleaners, hospital staff, or just children in a kindergarten.  Based on the person’s identity and location, the hand washing device creates a hand washing sequence. As this is occurring, the screen verifies that the user is washing their hands properly and collects data on the performance, which is sent to the company’s cloud-based servers. SoapyCare can then detect when someone is doing the proper hand hygiene routine, and when someone is not. Post washing, a summary can be sent straight to the user’s smartphone or device. The customers’ management teams decide the consequences if people do not comply with internal hygiene policies.  The company says its hand washing unit is also environmentally friendly, using 95% less water and 65% less soap than users would typically utilize when washing their hands without the machine.

The company says it should have a few hundred Soapy units installed around the world by the end of the year. The cost per machine ranges from $ 1,000-$ 1,300 per system, depending on the specific project.

The most important thing in the world.

Surewash and Vizzia are two other examples of other companies working to ensure that people follow proper hand washing protocols..

According to SoapyCare’s calculations from The Centers for Disease Control data, some 2.4 billion people, roughly one third of the world’s population, gets sick as a result of  improperly washing their hands. In the US alone, there are over 42 million illness cases as a result of inadequate washing and hygiene, according to CDC information on foodborne illnesses and handwashing.

This problem is especially severe in the food and beverage, and healthcare industries. According to the CDC, in the food and beverage industry, 89% of illnesses come from poor hygiene. The CDC states that one in 31 patients return to or stay in the hospital due to diseases that spread from doctors and nurses performing improper hygiene practices.

Dr. Roni Sharon at Sheba Medical Center in Israel says more could be done to avoid unnecessary infections at hospitals. Adequate handwashing by hospital staff can potentially reduce 40-60% of preventable infections acquired in the hospital, Dr. Sharon said. This is also true outside of hospitals. Within the past year, studies have shown that OTC hand sanitizers, which until now have been a holy grail product boasting 99.9% effectiveness in killing germs and bacteria, are not working nearly as well as people think. The FDA states that these hand sanitizers are inferior to hand washing in food establishments, and the CDC and WHO have published similar sentiments.

The new trend, SoapyCare predicts, is working to make hygiene as simple and easy as possible so that machines can create positive habits in employees, keeping everyone in their surrounding environments safe and healthy.  “Through newly adopted gamified solutions, technology can bring people to create desired shifts in their behavior,” says Inbal Arieli, author of Chutzpah: Why Israel is a Hub of Innovation and Entrepreneurship.

Max Simonovsky and Alex Orlovsky, the scientists and founders behind SoapyCare, say the company was founded as a social impact venture, which means it does not simply have an economic agenda. So while their primary focus is on ensuring a reduction of sickness rates as a business model, they also pledge to donate one unit to a developing country for every ten units that are purchased anywhere across the globe.

Revital Aloni of Maverick Ventures (Israel) contributed to this article.