Speaking on The Dr Oz Show, 50-year-old Mathison admitted his mind started ‘racing’ ahead of him, preparing for the worst before he knew his disease was in its early stages.

Mathison announced his diagnosis with renal cell carcinoma on September 9 and underwent surgery to remove the tumor the same month.

He’s now been declared deemed cancer-free, but Mathison isn’t wasting any time reminding others to ‘get in tune with your body because it could save your life,’ he said.

‘It certainly did mine.’ 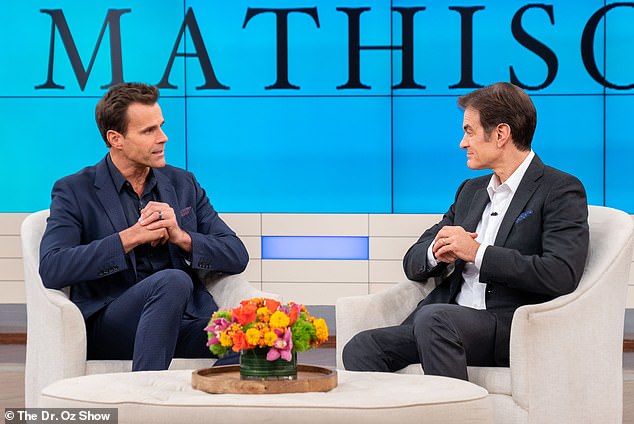 Mathison was enjoying a day on the golf course when his cell phone rang earlier this year, with news that could have ruined much more than his golf game.

‘It didn’t feel real, everything kind of slowed down, because as soon as you hear the word “cancer,” obviously all sorts of thoughts come racing into your head,’ said Mathison.

‘You start thinking about family and your kids of course.’

Mathison’s first call was to his wife of 17 years, Vanessa Arevalo.

A fitness trainer, Vanessa was quick to adopt a determined attitude.

‘She immediately said, “We’re going to beat this, it’s going to be alright,”‘ Mathison tells Dr Oz in the episode set to air on Monday November 25. 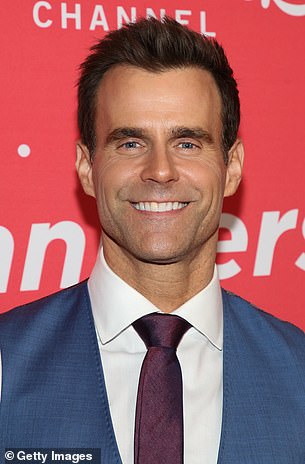 Mathison was enjoying a round of golf when he received the fateful call from his doctor (pictured playing, left). The 50-year-old soap alum says he immediately called his wife, Vanessa, who reassured him they would ‘beat this’

The couple waited a few days to tell their children, 13-year-old Leila and 16-year-old Lucas, so that Mathison could learn more details from his doctor.

Fortunately, Mathison did indeed have a very good chance of beating the disease.

Renal cell carcinoma is a rare condition but the most common form of the disease to strike adults.

Kidney cancer rates lag far behind cancers of the lung for both sexes and breast cancer for women, but still ranks as the sixth most common cancer in men and the eighth in women.

The five-year survival rate for Mathison’s particular kind of cancer is 94 percent.

He was quickly booked for surgery and had the tumor removed from his kidney.

Now designated cancer-free, Mathison is glad and relieved he spoke up about his symptoms and encourages others to do the same. 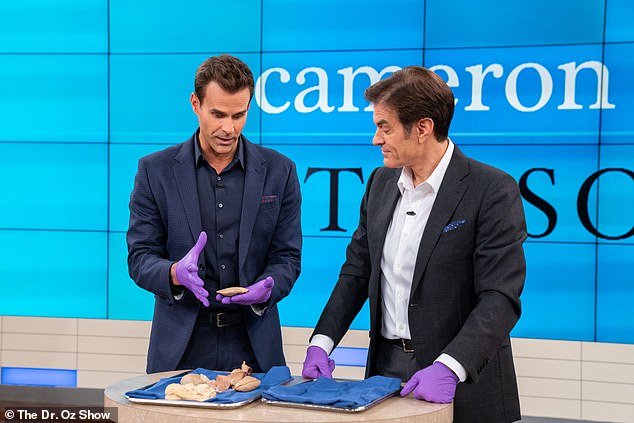 While explaining Mathison’s form of kidney cancer, renal cell carcinoma, he and Dr Oz warn that you  need to be ‘tuned into your body’ to spot the disease’s subtle signs

Kidney cancer is slow to grow and progress, and as a result is usually caught in its early stages.

This is particularly fortunate because it rarely causes any symptoms before it’s progressed.

When kidney cancer reaches its later stages, it can cause blood in the urine, persistent back or side pain, loss of appetite and weight loss fatigue and intermittent fever, according to the Mayo Clinic.

Often these signs are subtle at first, and easily missed, but Mathison advises: ‘Pay attention to it.’

‘My big lesson is to really be aware.’