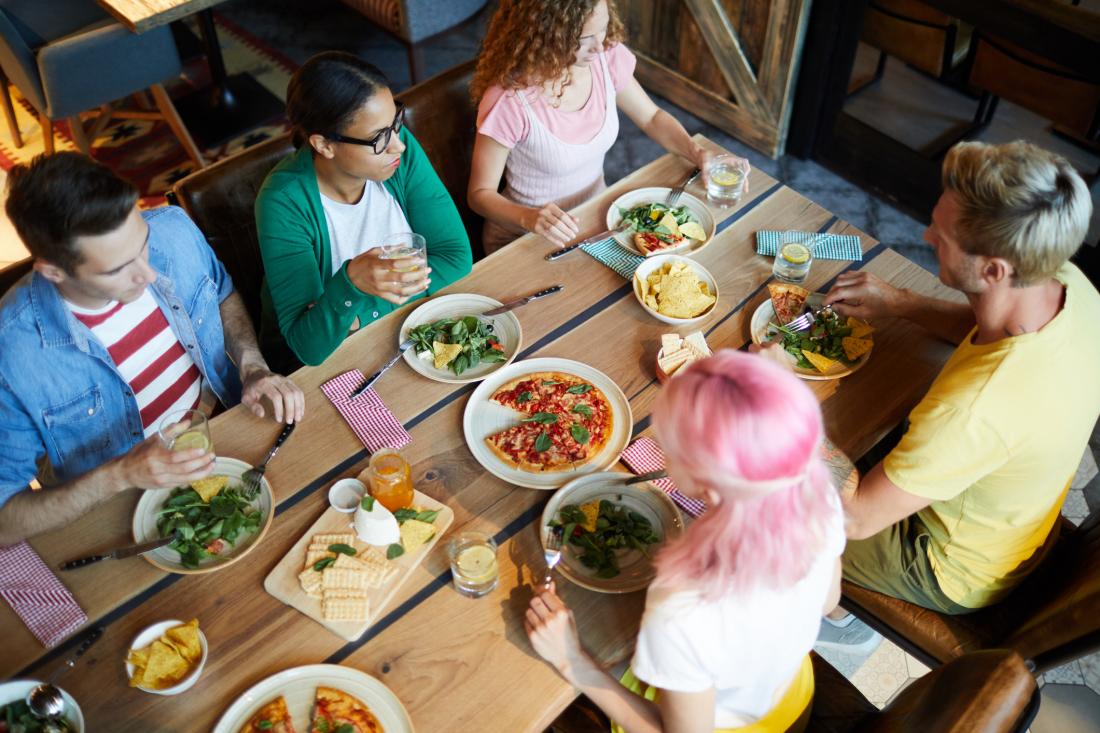 New research looks at ways to get more people to eat a vegetarian diet.

Livestock farming gets a bad rap for its contribution to greenhouse gases, which trap heat and contribute to global warming. In the United States, agriculture contributes 9% of gas emissions to the atmosphere, much of which is down to livestock.

By passing gas, ruminants, such as cattle and sheep, pass methane into the atmosphere. Methane is 25 times more powerful at trapping heat than carbon dioxide — and concentrations have more than doubled in the last 200 years.

So, lowering methane levels in the atmosphere could have a significantly positive impact on the environment, which is why vegetarianism seems like a good solution.

But, the question remains — how do you get meat lovers to choose vegetables over meat meals?

A new study from the University of Cambridge in the United Kingdom shows that the solution could be as simple as adding more vegetarian options to menus. The paper appears in the journal Proceedings of the National Academy of Sciences.

The study looked at the sales data of over 94,000 meals in three unnamed Cambridge college cafeterias over a year. It found that by doubling vegetarian choices to 2 out of 4 of the meal options available, the sales of vegetarian meals increased by 40.8%–78.8%.

Read More:  5 Ways You Are Stopping Yourself From Building Muscle Posted By : Adrian Sherman

This is the first major study to see whether offering different food options would encourage people to make healthier choices both for the planet and public health.

“This study is important because high meat diets are incompatible with a safe climate, so we need to find effective, simple, non-controversial approaches to get us all to eat more plant based food.”

Garnett, a conservationist within Cambridge University’s department of zoology, added, “This solution still needs testing in other countries with other demographics to see if our results still hold.”

An online national survey in the U.S. by the Vegetarian Resource Center (VRC) through The Harris Poll found that only 4% of adults were vegetarian or vegan.

However, 46% of the 2,027 adults canvassed always or sometimes ordered vegetarian meals when out and about 20% of those ordered vegan options.

The VRC called on food companies and restaurants to provide more vegan dishes.

The Cambridge research team found that the biggest meat eaters — those who had consistently chosen fish or meat before the second vegetarian option became available — were the ones who opted for a vegetarian meal in the largest numbers.

Not only that but having a vegetarian lunch did not make it any more likely that the traditional meat eaters would compensate by having a meaty dinner.

The study, which looked at diners’ daily meal choices through payments made on university cards, ran through two canteens. The canteens varied their range from no vegetarian dishes at all to days when 75% of options were vegetarian.

A third canteen offered lunchtime menus that shifted every 2 weeks from one veggie option to two. Researchers concluded that upping the proportion of vegetarian meals had the most significant impact on those who ordinarily chose more meat.

“The response was striking,” says Garnett. “It seems obvious in hindsight, and a number of commentators have asked, ‘Why is this science? Isn’t this obvious?’ I would say yes and no. If we had found no effect, that could also seem obvious.”

She continues, “I find it fascinating that by responding ‘Isn’t this obvious?’ people are implicitly acknowledging that our food environments can have a strong influence on what we eat and other health behaviors.”

The scientists from the university’s zoology, geography, and public health departments say that meat rich diets are one of the leading causes of “species loss and climate change.”

“Shifting to a more plant-based diet is one of the most effective ways of reducing the environmental footprint of food.”

Garnett hopes that many cafes and other eating venues will reduce the number of meat options they offer and replace them with vegetarian options.

The team claims that its study has helped change food policy at the university. Its catering service has removed beef and lamb from its menus and increased the number of vegetarian options it offers.