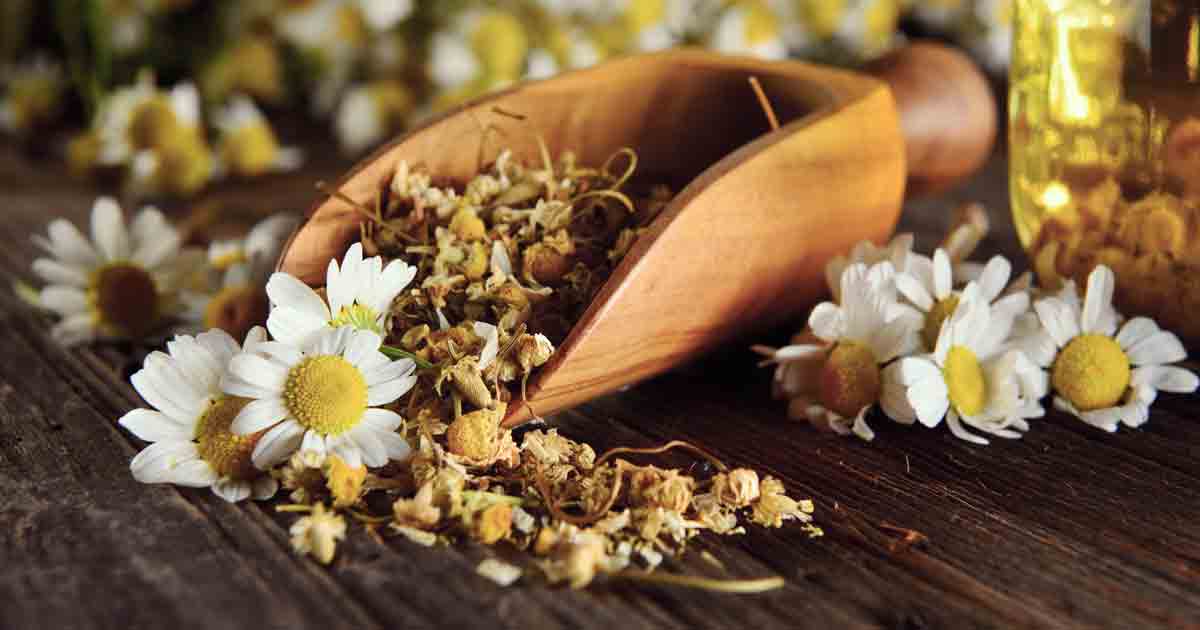 People are familiar with chamomile as a flower with a daisy-like appearance.1 However, this member of the Asteraceae or Compositae family is actually a potent herb. There are two known chamomile plants today: German chamomile (Matricaria recutita) and Roman chamomile (Chamaemelum nobile).2,3

German chamomile flowers are tiny and have white collars6 and hollow receptacles, surrounding a raised and cone-shaped center. They grow on long, thin and light green stems, are distributed in a comb-like arrangement and have tiny leaves that are twice-divided into linear portions.7

Roman chamomile has inch-wide white flowers, a broader conical disk and a solid receptacle. Its leaves are flatter and thicker, are twice or thrice divided into linear segments, and its flowers sit atop slightly hairy stems.8 Roman chamomile is usually found in Western Europe, northward to Northern Ireland.9

I use chamomile every night and from my perspective the most helpful benefit is that it is one of the highest sources of the polyphenol apigenin. Apigenin is a very powerful inhibitor of an enzyme on the surface of your cells called CD38.  While CD38 is useful for your immune function it also is a major consumer of NAD+ which is the most important coenzyme in your body.

You need NAD+ to fuel another enzyme called PARP which is your major enzyme to help your damaged DNA become repaired. When you are regularly exposed to EMFs, PARP is regularly activated and consumes NAD+ which is one of the reasons it is so low in most of us, aside from the fact that simply aging tends to lower it.  When NAD+ is lowered, then PARP doesn’t function, and you don’t repair your DNA damage.

This is one of the reasons why I pay attention to keeping my NAD+ levels high and why I use chamomile every night. Additionally, the volatile oils found in chamomile flowers, which include alpha-bisabolol, alpha-bisabolol oxides A and B, and matricin, are said to be responsible for its beneficial properties.10 The health benefits linked to chamomile include its ability to help:11,12

Other beneficial bioactive ingredients also found in chamomile include:17

Chamomile is known for its medicinal uses, especially in ancient Egyptian, Greek and Roman civilizations. According to the Milton S. Hershey Medical Center, chamomile was revered because of its potential to help alleviate conditions like:18

Nowadays, chamomile can be used to relax smooth intestinal muscle contractions,19 and may be added to salves, lotion and ointments for use as a wash20 or compress21 to aid in relieving hemorrhoids,22 wounds,23 skin irritation,24 cold or canker sores,25,26 pink eye27 and mucous tissue inflammation.28 Chamomile is also used as a mouth rinse for gingivitis29 or inflammation of the oral cavity, while chamomile vapor may help alleviate cold symptoms30 or asthma.

Chamomile is incorporated into skin and hair care products, detergent, perfume and cosmetics, while its extract may be useful for these purposes:31

Fresh or dried chamomile flowers, chamomile essential oil and flower extracts can be added to salads, soups or drinks, while chamomile leaves can be used in salads or steeped into tea.33

How to Grow Chamomile

Chamomile plants may grow in cool weather or under full sun. Make sure to provide partial shade, and that the soil is dry with a neutral pH level between 5.6 and 7.5.34,35,36 The good thing about growing your own chamomile plants is there is very little fuss involved. Avoid using too much fertilizer because this may lead to weak-flavored foliage and few flowers.

Also, provide just enough water to prevent overwatering. Chamomile is drought-tolerant and only needs to be frequently watered during prolonged drought.

If you have a vegetable garden, growing chamomile plants may help deter pests, as they emit a strong scent. Just make sure to check the plants often to ensure that they’re thriving. If you have weak plants due to lack of water or other issues, they may attract aphids, mealybugs or thrips.37,38

What Is Chamomile Tea Good For?

Drinking chamomile tea is a popular way to get your daily dose of this herb. Aside from having little to no caffeine (chamomile tea is naturally caffeine-free),39 there are numerous health benefits linked to it:

If you want to make chamomile tea, try this recipe from Genius Kitchen, which is unique because of the addition of apple slices:52

Take note that chamomile tea can trigger vomiting and allergic reactions, especially if you’re sensitive to asters, ragweed, daisies and chrysanthemum.53 Pregnant or breastfeeding women must limit or avoid drinking chamomile tea, since there’s a lack of information regarding its safety.54 Excess consumption of chamomile products like chamomile tea may increase a pregnant woman’s risk for increased stillbirth, premature delivery55 or miscarriage.56

Make Chamomile Oil a Staple, Too

You can reap some of chamomile’s benefits by using either German or Roman chamomile essential oil. Research has revealed that these oils offer the following potent, health-boosting substances:57

Chamomile oil may help induce sleep, calm down nerves and promote a general sense of calmness, making it ideal for people who are nervous or have anxiety problems. It also can help ease sore muscles, tight joints, rheumatism or back aches, relax your digestive system, and aid in relieving constipation and other related problems. The oil is also a mainstay in cosmetic products, since it soothes redness, irritation, itchiness and swelling, while helping address wounds and inflammation.58

Ideally, harvest chamomile flowers during dry days after the dew has dried, and once you notice flower petals are fully open. Getting the flowers should be easy, as Gardening Know How details:59

While you can use fresh flowers immediately, you can also dry chamomile flowers for future use. Here’s how to do it:60

Chamomile May Come With Side Effects

Although occurrences of chamomile side effects are relatively uncommon, chamomile can trigger vomiting, drowsiness61 and allergic reactions,62 such as breathing difficulties, closing of the throat, hives or swelling of the lips, tongue or face.63

As mentioned in a previous section, chamomile mustn’t be taken by people who are allergic to daisies, asters, chrysanthemums or ragweed. Chamomile is also known to interact with some drugs and substances, so exercise caution if you’re taking the following:64,65

To prevent such side effects from occurring, take an allergen test before using chamomile and consult a physician to see if your body can handle this herb.