Children who enter puberty early have the strongest bones as adults, a study has shown.

Scientists at the University of Bristol studied thousands of British children, taking bone scans over the course of 15 years.

They found the later a child hit puberty – defined as the later they had their growth spurt – the weaker their bones were.

Growth in bone strength starts to halt in the early twenties, therefore those who hit puberty late still had weaker bones into their adult life.

This can be a crucial factor for whether an adult goes on to develop conditions such as osteoporosis later in life, experts said. 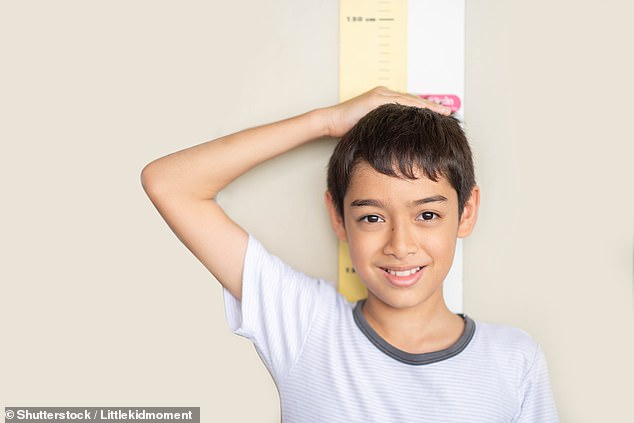 Children who enter puberty early have the strongest bones as adults and are less likely to fracture their bones, a study by the University of Bristol showed

Researchers collected data on 6,389 children who had bone scans between 10 and 25 as part of the Children of the 90s Study.

They calculated the age a child hit puberty by looking at when they had their largest growth-spurt – called ‘age at peak height velocity’.

Read More:  Strange fat cells in our bones grow rather than shrink when we starve

HOW CAN YOU MAINTAIN BONE STRENGTH AS YOU AGE?

Although teens who had their pubertal growth spurt later than their peers had lower bone-strength, they did ‘catch-up’ to some degree.

By the time they were 18, their bones had acquired density at a much quicker speed. Particularly, boys had a more intense growth.

But it wasn’t quite enough – by age 25 those who hit puberty later still had almost five per cent less bone strength than early maturers.

Puberty is a key life milestone when teenagers go through a growth in their skeletal system, among other things.

The greatest gain in bone size and strength occurs during adolescence because of hormones.

The study, considered to be the first of its kind, was published in the Journal of the American Medical Association’s Network Open.

Peak bone mass at the end of teenage growth spurts is thought to be an indication of later risk of fractures and osteoporosis.

One previous study found an increase of 10 per cent in bone density would delay osteoporosis by 13 years.

The condition is estimated to affect three million people in the UK, according to The International Osteoporosis Foundation.

Growth-spurts are an accurate marker of puberty, the researchers said, but it does have limitations.

Lead author Dr Ahmed Elhakeem said they also used the age at which girls started their period as an indicator of starting puberty, and got the same study findings.

Dr Elhakeem said: ‘I’d like to see more advice available for people who reach puberty later on measures they can take to strengthen their bones.

‘The next steps should involve more detailed assessments of the long-term effects of puberty on growth and bone development.’

Alison Doyle, of the Royal Osteoporosis Society, claimed the research filled a gap in understanding how bone density in puberty affects adult life.

She said: ‘Investment in this area of research is vital in furthering our understanding of the causes of osteoporosis and helping people to maintain good bone health throughout life.

Read More:  Half Adults Who Claim Food Allergy Don't Have One - WebMD

‘Understanding changes in bone density during puberty, and the interventions that people can take for their bone health now to prevent osteoporosis and fractures in the future, is an important step forward in finding a cure for this disease.’

The researchers said teenagers going through puberty later than their peers should do more exercise to increase and maintain their bone density.

The study was not able to make any conclusions about fractures or bone disease later in life because the study finished when participants were 25.

Osteoporosis is a condition that weakens bones, making them fragile and more likely to break.

It develops slowly over several years and is often only diagnosed when a minor fall or sudden impact causes a bone fracture.

The most common injuries in people with osteoporosis are wrist, hip and spinal bone fractures.

However, they can also occur in other bones, such as in the arm or pelvis.

Sometimes a cough or sneeze can cause a rib fracture or the partial collapse of one of the bones of the spine.

Osteoporosis isn’t usually painful until a fracture occurs, but spinal fractures are a common cause of long-term pain.

Figures suggest 54million people have the condition in the US, while 3million are thought to suffer in the UK.