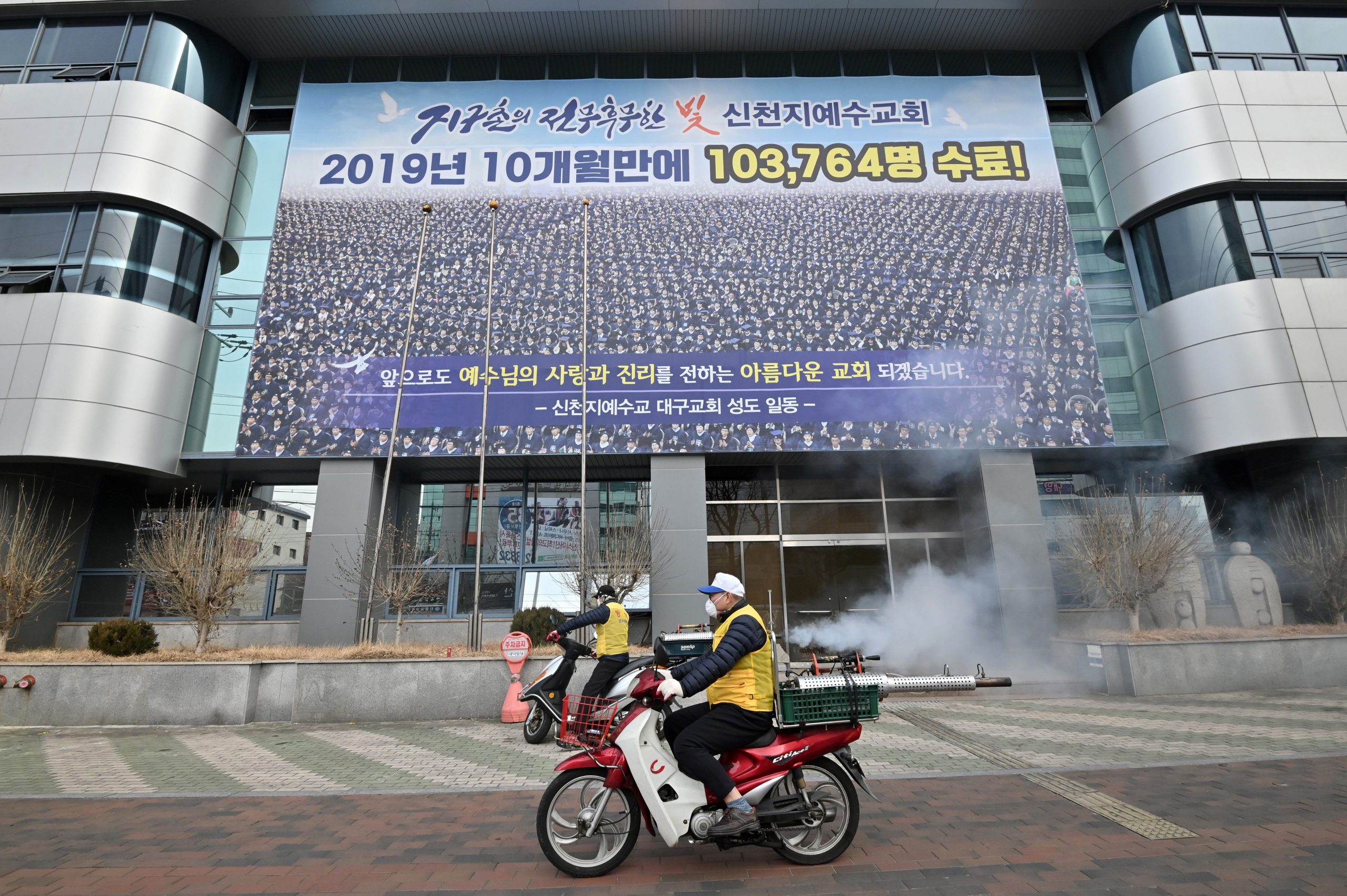 All times below are in Beijing time.

The five residents on the plane were among more than 200 who have been evacuated since Thursday. They are all serving out a two-week quarantine period in Hong Kong.

As of Saturday, there were 70 confirmed cases in the city, said the report.

More of half of the cases have been linked to outbreaks at a branch of the Shincheonji Church of Jesus in country’s fourth-largest city Daegu. More than 1,000 people who attended the church have reported flu-like symptoms.

Of the 123 new cases, 63 are from the church in Daegu, according to the health authority.

Officials are also investigating a possible link between churchgoers and the spike in infections at the Cheongdo hospital, where more than 110 people have been infected so far, mostly patients at a mental illness ward.

Meanwhile, Samsung Electronics on Saturday confirmed one coronavirus case at its phone factory in South Korea, which caused it to shut down the entire facility, according to Reuters.

Infections in Italy saw a sharp spike, surging to 79 cases by Saturday, with two dead, according to the country’s health ministry.

In the two worst-hit regions of Lombardy and Veneto, sports events have been canceled, and authorities closed schools and universities, according to a Reuters report.

A dozen towns in northern Italy effectively went into lockdown on Saturday after the deaths of the two infected people, and a growing cluster of cases with no direct links to the origin of the outbreak abroad.

An information sign that reads ‘Coronavirus, the population is invited as a precautionary measure to remain at home’ is pictured in the village of Casalpusterlengo, southeast of Milan, on February 22, 2020.

Companies have told employees from virus-hit areas to stay at home, the report said. Lombardy and Veneto are the heart of Italy’s industrial region and both make up 30% of gross domestic output.

All times below are in Eastern time.

The number of coronavirus cases tripled in South Korea on Saturday, according to the Korea Centers for Disease Control and Prevention, with the number of confirmed cases in the country surging to 433 from 156 over a 24-hour period. The surge in cases adds to fears among health officials that the virus, which has spread to 28 countries, could turn into a global pandemic.

Read More:  Medical News Today: How does your brain make sense of 'the bigger picture?'

More than half of the cases in South Korea are connected to the Shincheonji Church of Jesus, and over a thousand members have reported potential symptoms of the virus. The area surrounding the Christian sect’s church in Daegu, a major city in South Korea, has become empty as businesses there shutter.

South Korean health officials spray disinfectant in front of the Daegu branch of the Shincheonji Church of Jesus in the southeastern city of Daegu on February 21, 2020.

Chinese state media reported that seven ships brought into the city of Wuhan in Hubei province will be converted into temporary accommodations for medical staff in the city.

Thousands of medical workers from across the country have been brought into Hubei to help the province contain the outbreak.

Xinhua News reported that the ships normally operate as river cruises in the Three Gorges, a popular and scenic tourist area along the Yangtze River. The state news agency said, however, that the cruise ship business in the Three Gorges had been closed due to the outbreak.

The move comes amid heightened scrutiny after hundreds of passengers on board the Diamond Princess cruise ship contracted the new coronavirus. —Wang

12:20 pm: WHO fears spread of virus to countries in Africa

World Health Organization (WHO) Director General Tedros Adhanom Ghebreyesus met with African officials from Geneva on Saturday morning to urge them to prepare for a potential spread of the coronavirus across Africa.

Just one case has been confirmed on the continent, but health officials fear the increasing global spread of the virus, especially to countries with less developed health-care systems.

WHO says it has shipped more than 30,000 sets of personal protective equipment to six countries in Africa, and is set to ship 60,000 more sets to 19 countries in upcoming weeks. It has also provided online training courses to 11,000 African health workers, as well as advice to countries on how to conduct screening, testing and treatment.