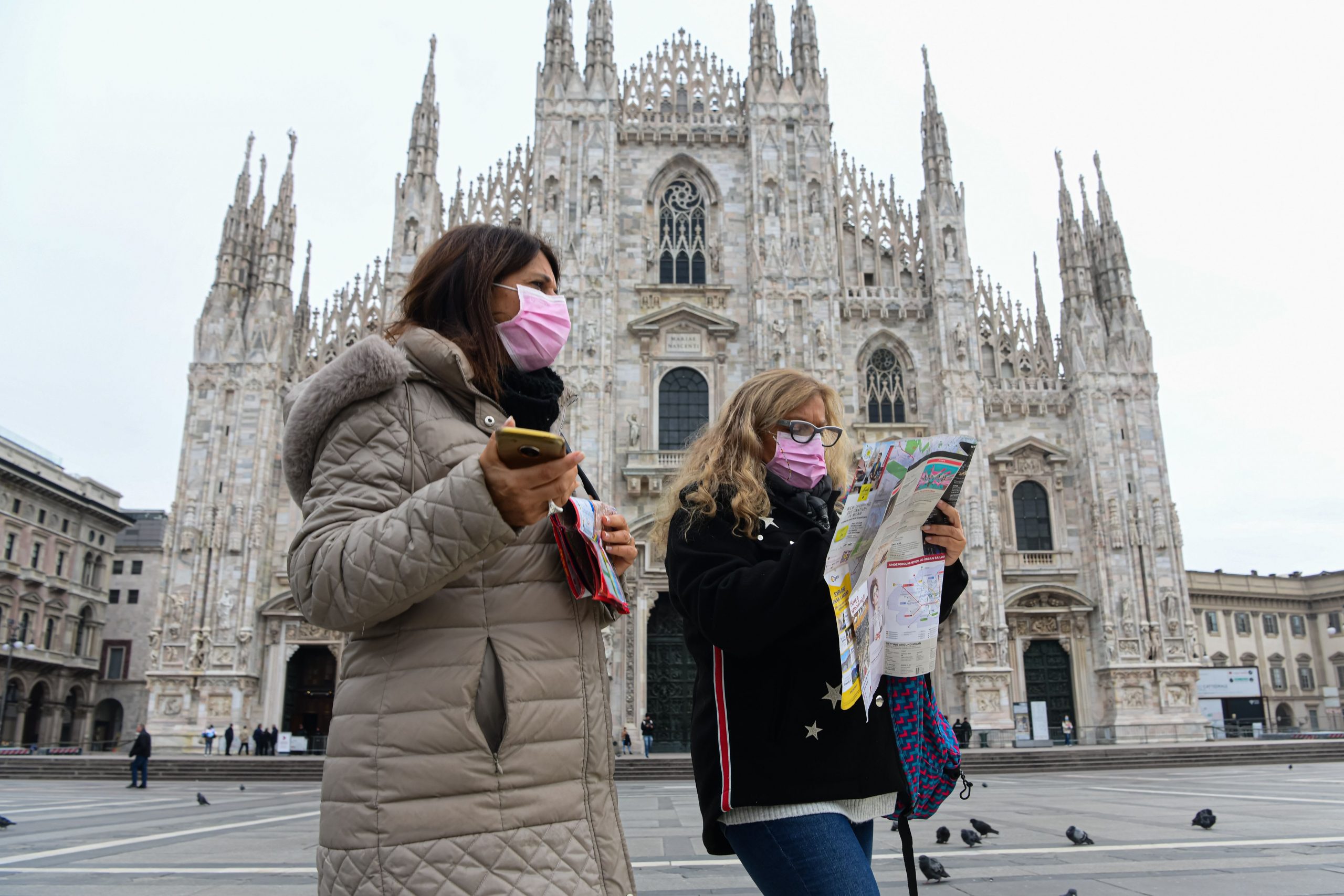 Two tourists from Argentina wearing respiratory masks walk while holding a tourist map in Piazza Duomo in Milan, on March 5. 2020.

All times below are in Beijing time.

The mayor of the South Korean city at the center of its coronavirus outbreak says infection spread may be slowing, after the rate of growth for cases slid to its slowest in 10 days. The number of new cases on Sunday dropped below 300 for the first time since Feb. 29, Daegu Mayor Kwon Young-jin said, according to Reuters. Still, health officials caution that the numbers could increase again as more test results come in.

South Korea’s death toll reached 50 on Sunday, its total infection count at 7,313, the highest of any country outside China.

Two men and two women in Bulgaria are the country’s first to have contracted the coronavirus, the head of Bulgaria’s National Center for Infectious and Parasitic Diseases said Sunday.

South Korea confirmed an additional 179 cases of the coronavirus, bringing the total for the last 24 hours to 272, according to the Korea Centers for Disease Control. The country has the second-highest number of cases worldwide after China, with 7,313.

2:26 pm: Virus-stricken cruise ship off California will dock in Oakland

An agreement has been reached to dock the coronavirus-hit Grand Princess cruise ship at California’s port of Oakland on Monday, the ship’s captain said. The ship was carrying 21 people who had been infected with the coronavirus, Vice Presicent Mike Pence announced Friday. Two of the infected are passengers and 19 are crew.

In this Feb. 11, 2020 photo, the Grand Princess cruise ship passes the Golden Gate Bridge as it arrives from Hawaii in San Francisco.

Guests requiring acute medical treatment or hospitalization will be transported to health facilities in the state. California residents not in need of urgent care will go to a federally operated isolation facility within California for testing and isolation, and non-California residents will be transported by the federal government to facilities in other states, Smith said. This does not apply to international passengers, for whom the ship’s managers and authorities are “working to get details,” he added.

1:40 pm: Death toll from collapsed hotel in China climbs to 6

11:45 am: Italy locks down a quarter of its population

Italian Prime Minister Giuseppe Conte announced early Sunday that the entire region of Lombardy and a number of provinces in other regions were put under lockdown as the coronavirus continued to spread throughout the country.

The new measures will apply to about a quarter of the Italian population and will be in force at least until April 3.

In the middle of the night, Conte signed a decree that imposes new restrictions to the movement of people in the region of Lombardy and in a number of northern provinces. The entry and exit to and from these areas will be allowed only in exceptional cases.

A patient infected by the coronavirus in Argentina died on Saturday, in the first such death in Latin America, according to Reuters, citing Argentina’s health ministry.

Other countries in South America such as Paraguay, Colombia, Chile and Peru have confirmed their first cases of coronavirus in the past week, the report said. — Tan

As of Sunday morning, 50 people have been rescued after a hotel in China’s Fujian province collapsed on Saturday evening, according to Chinese state media.

Read More:  Vaginal pain: Causes and how to treat it

The hotel in the southeast Chinese port city of Quanzhou was used to quarantine people who had recent contact with coronavirus patients. Around 70 people were trapped in the rubble after it collapsed.

There were two deaths so far, according to local media reports in Fujian.

Rescue workers are seen on the site where a hotel being used for the novel coronavirus quarantine collapsed in the southeast Chinese port city of Quanzhou, Fujian province, China March 7, 2020.

As of Friday, the province had 296 cases of coronavirus and 10,819 people were placed under observation after being classified as suspected close contacts, according to a Reuters report, citing the Fujian provincial government. — Lilian Wu, Tan

It had six more fatalities to a total death toll of 50, according to the Korea Centers for Disease Control and Prevention.

The country, facing a shortage of masks, will put in place a mask purchase limit for each person from Monday, according to a Reuters report.

On Sunday, South Korea’s Prime Minister Chung Sye-kyun said, according to Reuters: “Even if you feel inconvenient, I ask you to show a mature sense of civil awareness, based on concessions, consideration and cooperation so that people who really need face masks can buy them.” — Tan

A U.S. Marine in Virginia has tested positive for the new coronavirus, according to the Pentagon.

Fort Belvoir is a major base in Fairfax County, Virginia.

A soldier based in South Korea was also infected late last month — the first American service member to test positive for the virus. — Tan

(This entry has been updated with details of where the Marine is assigned to.)

Of the new cases, 41 were in Wuhan in Hubei province, the epicenter of the outbreak. All the 27 additional deaths were in Hubei.

All times below are in Eastern time.

Authorities in the United States have reported 434 cases of the coronavirus and 19 deaths, according to data compiled by NBC News. Several states have declared emergencies in response to the virus, including California, Florida, Indiana, Kentucky, Maryland, New York, Utah and Washington. Pennsylvania has issued a disaster declaration and the city of Austin, Texas has issued a local disaster declaration. – Kimball

New York has identified 13 additional cases of the conronavirus, according to the governor’s office, bringing the statewide total to 89. The new cases are all located in Westchester County.

Gov. Andrew Cuomo declared a state of emergency earlier in the day in an effort to contain the fast spreading virus. An emergency declaration will allow the state to buy supplies and hire workers more quickly and easily to help the health departments monitoring patients under self-quarantine, Cuomo said during a press conference. – Kimball, Newburger