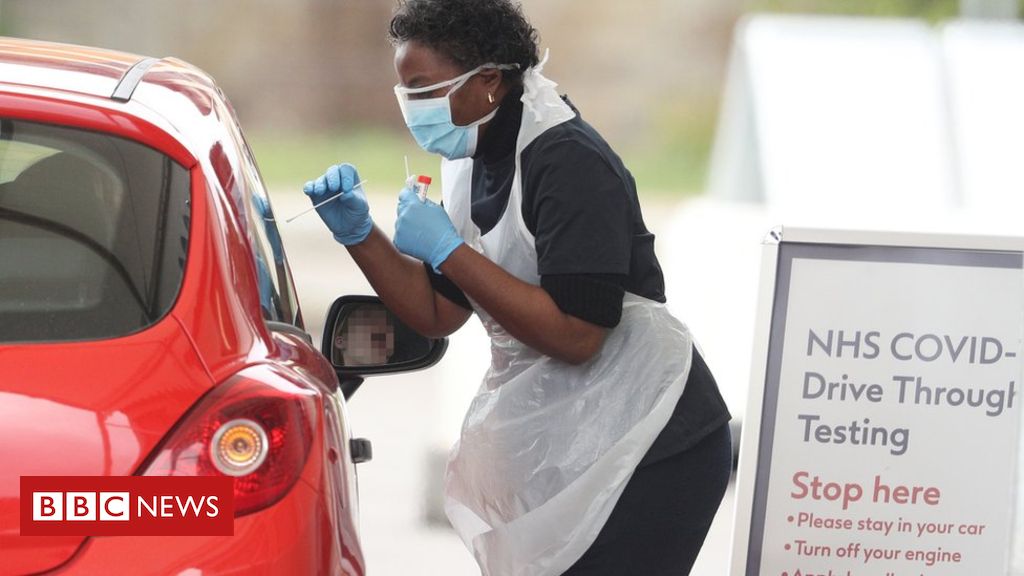 It is “probable” the government will miss its 100,000 a day coronavirus test target, a senior minister has admitted.

Health Secretary Matt Hancock pledged to reach the target by the end of April – but only 52,000 tests were carried out on Tuesday.

Hospital chiefs described the figure as a “red herring”, saying there was a need to carry out mass testing.

That strategy has been implemented by other countries, including Germany.

Mr Hancock set out the government’s daily testing target of 100,000 per day on 2 April, after Prime Minister Boris Johnson initially identified an aim to carry out 250,000 tests a day.

Mr Buckland told Sky: “Even if we don’t hit it, and it’s probable that we won’t, we will in the next few days hit that target.”

On BBC Breakfast, he acknowledged that while the government target may not be met by the end of the month, it was important to be “bold” in the circumstances.

“Even if it [the target] isn’t met, we’re well on our way to ramping this up and 100,000 is an important milestone, but frankly we need more,” he said.

Downing Street insisted on Thursday that it was “working hard” to hit its target of testing 100,000 for coronavirus by the end of the day.

As of 28 April, testing capacity had been increased to 77,365, the prime minister’s spokesman said.

He added: “You can chart the progress that we’ve made towards hitting that target and that we are working hard today to ensure that people who need tests get them.”

On Wednesday, the government’s testing coordinator, Prof John Newton, said he was “pretty confident we will hit that target”.

Prof Newton, director of public health improvement at Public Health England, added that there would be a lag due to receiving the data but it would be clear whether the government had reached the target by the end of the week.

Chris Hopson, chief executive of NHS Providers, which represents hospitals and NHS trusts in England, said the UK should replicate mass testing capacity that has been seen in countries such as Germany and South Korea.

He said: “The focus on ‘we are going to perform 100,000 tests a day’ is really a red herring because all it does is measure how many tests get performed today.

“What we need to know is what are we going to do in terms of the testing regime over the next six, eight, 10, 12 weeks as we come out of lockdown?”

In order to exit lockdown, Mr Hopson said the 800,000 people who work for the NHS would need to be tested around once a week.

In a report released on Tuesday, NHS Providers said the English health and care system “started from a poor position” and struggled to demonstrate a “clear, effective and well communicated strategy” on testing.

Liz’s story: A queue which snaked around the car park

But after embarking on a 40-mile round trip to a testing site at Bristol Airport, she found herself waiting in a queue.

She said: “After 30 minutes we realised exactly how long that queue was – there must have been more than 100 cars waiting in a queue which snaked all around the car park.

“Then people wearing high-vis jackets appeared and started going round cars with a sign saying the testing facility was over capacity and to make an appointment for another day.”

After trying to book again she was told the next available was on Friday, her seventh day of self-isolation and outside of the testing window.

“I was left feeling angry, disappointed and very frustrated by this mismanagement and waste of time,” she said.

Mass testing has been implemented in countries such as Germany, where the death toll is around 6,500, and South Korea, where there have been 247 recorded deaths. The latest figures show more than 26,000 people in the UK have died with coronavirus.

But Prof Newton told Today he did not necessarily think a lower number of coronavirus deaths in Germany was due to high levels of testing alone.

“Germany was in a particularly strong position, and people assume that the level of testing in Germany is what led to the lower numbers of cases and deaths,” he said.

“But that’s by no means obvious, and there are other factors that led to Germany having lower numbers as well.”

This week testing has been extended to those with symptoms who are essential workers, over 65 or have to work away from home, as well as to anyone who lives with someone in these groups and has symptoms.

The latest figures announced at Wednesday’s briefing showed 52,429 people were tested for Covid-19 in the UK on Tuesday.

The government’s testing website has run out of home-test kits each day since being launched.

Have you been tested? Or are you waiting for a test?

Please include a contact number if you are willing to speak to a BBC journalist about your experience.