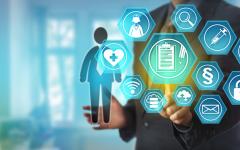 As health system leaders look ahead to the challenges and opportunities of the coming year, they are increasing their spending to defend against cyberattacks, expressing optimism about reimbursement for telehealth services, and feeling anxiety about Apple, Amazon and Google entering the health care space, according to a new survey.

The second annual survey, conducted by the Pittsburgh-based Center for Connected Medicine (CCM) in partnership with the Health Management Academy, reflects the opinions of healthcare C-suite leaders from nearly 40 major U.S. health systems across the country about their IT priorities for the year ahead. CCM is a collaborative health care executive briefing center jointly operated by GE Healthcare, Nokia and UPMC. The Alexandra, Va.-based Health Management Academy is a membership organization consisting of executives from the country’s top 100 health systems focused on sharing best practices.

Conducted in three parts, the research started with a survey of health system information officers—CIOs, chief medical informatics officers (CMIOs) and chief nursing informatics officers (CNIOs— in May 2018 to determine the top areas of health IT for 2019. A quantitative survey was conducted in July 2018 with questions focused on cybersecurity, telehealth and interoperability. In September 2018, qualitative interviews were completed with 18 C-suite executives, including chief executive officers, chief operating officers, CIOs and CMIOs.

According to the survey report, “Top of Mind for Top Health Systems 2019,” health system executive leaders identified cybersecurity, telehealth and interoperability as the top three areas of health IT that will have the most impact in 2019. Cybersecurity remained at the top of the list from the previous year’s survey, and telehealth and interoperability climbed the ranking. The previous year’s Top of Mind report had identified cybersecurity, consumer-facing technology, and predictive analytics as the top three areas of focus for 2018.

“While consumerism and analytics remain hot topics in health care, it was not surprising to see telehealth and interoperability rise in the minds of health IT executives for 2019. Policymakers, in particular, have emphasized telehealth and interoperability in the past year, and the threats of cyberattacks and data breaches are constant in health care,” the report authors wrote.

While healthcare executive leaders cited those three topics as immediate, pressing concerns, when asked what health IT technologies they anticipated would have the most impact on health care five year from now, health system executive leaders identified artificial intelligence, consumer technology, and genomics. According to the report, one CNIO said: “The technology is moving so fast that it is hard to predict five years out. I would not have picked some of these for 2019 one year ago.”

Hackers and other cyber-criminals are stepping up their attacks on the health care industry, leading 87 percent of respondents to say they expect to increase spending on cybersecurity in 2019; no health system was expecting to decrease spending. Half of respondents expect a spending increase greater than five percent.

For 2019, health systems said they would invest cybersecurity resources to bolster current areas of investment, with many focusing on both staff and technology, such as firewalls, intruder detection software, and dual authentication that guard against breach of protected health information (PHI).

Despite increasing financial investment and prioritization of cybersecurity at health systems, executives did not express robust confidence in their organization’s IT recovery and business continuity plans after an attack or breach. Seven out of 10 respondents reported being “somewhat confident” in their recovery and continuity plans; only 20 percent said they were “very confident.”

The most commonly cited challenge in cybersecurity was employee education—62 percent of respondents named “staff” as greatest point of cybersecurity weakness. What’s more, phishing and spear-phishing were cited as the most common types of cyberattacks in the previous 12 months.

According to the report, one CEO commented during an interview: “The people that are up to no good have far better tools than we do on our platforms. If they really target you, they will likely find a way in.… We are not trying to make it impenetrable, but we are trying to make it more difficult to break into our system than others in our market.”

Government policy is driving some of this optimism, the report authors wrote. “For example, CMS [The Centers for Medicare & Medicaid Services] published a proposal in July 2018 that provided three new remote patient monitoring reimbursement medical codes. While some critics have said the proposal’s $ 14 reimbursement for virtual check-ins is too low, the move by CMS appears to cement telehealth reimbursement as a priority for the agency.”

Most health system executives interviewed for the study said their health system had not yet calculated a specific return on investment (ROI) for telehealth. But systems are investing anyway as a hedge that future reimbursement will outweigh the potential losses of today, according to the survey report. “For the moment, reimbursement is widely thought of in terms of physician time, but as technologies evolve, the question will be whether reimbursement will expand to hardware. Investment can also be seen as a bellwether for provider sentiment toward transformation to value-based care,” the report authors wrote.

When considering a telehealth technology system, top features/priorities are “integration with the clinical workflow” and “ease of patient triage and virtual follow-up,” according to the survey.

Interoperability has emerged as a key challenge in health care as hospitals and health systems pursue value-based care, consumerism, and other initiatives that require broad sets of data from disparate IT systems, the report noted. As the health care industry continues to evolve, provider health systems are having to think more creatively about their strategies in order to remain successful.

More than half of respondents (61 percent) said the use of a major electronic health record (EHR) system was not stifling digital innovation at their health system. However, in qualitative interviews, several executives said an EHR was limiting their ability to innovate by locking them into a single vendor’s products, according to the report.

Seventy percent of informatics executive said they were “somewhat concerned” about big tech companies, such as Apple, Amazon and Google, disrupting the health care market; 10 percent were “very concerned,” the survey found.

The report quotes one CEO who said: “They are new competitors that look very different from traditional health care competitors. They are better in their space and can catch up quickly. Current stakeholders are resistant to change. If we’re slow and dodgy we’re going to get lapped.”

The survey also examined the role of the cloud in the future of health IT. The majority of health care data is expected to be stored in on-premises data centers (20 percent) or hybrid / private cloud (60 percent) in the next three years, according to the survey, and 10 percent said they anticipate storing health data in a public cloud.