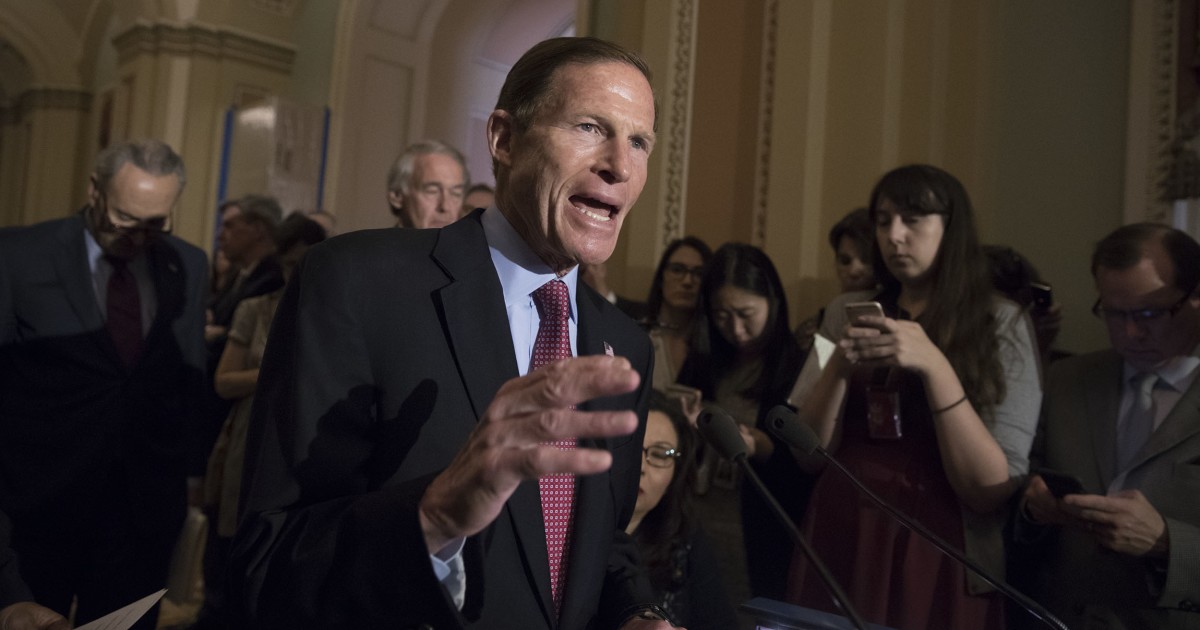 Democrats rolled out a series of legislative proposals Thursday aimed at lowering prescription drug prices, challenging the White House to back their proposals amid price increases in the new year.

“During his campaign, [President Trump] said he was going to stop the pharmaceutical companies from ‘getting away with murder,” Sen. Bernie Sanders, I-Vt. “Today, I say to President Trump: ‘If you are serious about lowering prescription drug costs in this country, support our legislation and get your Republican colleagues onboard.'”

Democrats called out drug companies and the administration for recently reported price increases. Sanders called the drug industry the “most powerful political force in this country,” with the exception of Wall Street. “They own Washington,” he said. Sen. Richard Blumenthal, D-Conn., accused Trump of “buying the myths and misleading pitches” from the drug industry when it came to proposals to extend the government’s role in healthcare. Drug companies have said that such arrangements would get in the way of innovation.

The proposal to align drug prices with that of other countries, known as the Prescription Drug Price Relief Act, is similar to one that the Trump administration is pursuing. The administration in the months ahead will create an “international price index” to bring the costs of Medicare drugs more in line with what other countries pay, but would apply specifically to drugs people get at the doctor’s office and in the hospital, rather than all drugs as the Democratic plan proposes.

Sen. Chuck Grassley, chairman of the Senate Finance Committee, said Wednesday that lawmakers would be looking at a bill to allow importation of cheaper drugs from Canada. The committee also will look at banning “pay for delay” settlements between brand and generic drug companies, and will consider the CREATES Act that would help generic companies get access to copies of drugs, said the Iowa Republican.

But the idea to allow Medicare to negotiate drug prices through the Part D program, as Democrats are proposing in the Medicare Drug Price Negotiation Act, does not have Republican support. Medicare Part D is run by private health insurers, who negotiate the prices of the drugs instead of the government.

“I feel very strongly that we don’t mess with that provision of it,” Grassley said, noting the program has come in under budget projections. “If it’s working don’t mess with it,” he added, though he acknowledged some things might change to modify the program.

Trump has said that lowering drug prices is one of his top priorities as president, and when he was running for office, he suggested he might back a plan to let the government negotiate drug prices in Medicare, but he mostly has backed off the idea. His administration has approved a record number of less-expensive generic drugs and has put forward several proposals including obligating drug companies to cite list prices on commercials.

Trump called out the pharmaceutical industry on Twitter Saturday for its for its pricing, just days after several news reports showed companies had increased the prices of drugs with the coming of the new year.

He called top health officials to the White House this week, and since then, Health and Human Services Secretary Alex Azar has made the rounds on TV outlets, stressing that the administration would consider all options until list prices of drugs come down.

“I want to be really clear to PhRMA companies out there and to the pharmacy benefit managers: The president and I will not stop until list prices of drugs come down; this behavior has to stop,” Azar said on Fox Business. “Drug prices must come down, and we will roll out more regulatory and legislative proposals, and we will work with Democrats and Republicans to get drug prices down.” Azar met this week with Trump, who is frustrated by reports of drug pricing increase.

An analysis by Rx Savings Solutions found more than three dozen drugmakers raised the prices on hundreds of medicines in the U.S. on Tuesday, for an average increase of 6.3 percent.

The Pharmaceutical Research and Manufacturers of America, a trade group known as PhRMA, called the analysis “flawed and inaccurate,” saying that it failed to take rebates and discounts into account, but also said that patients likely weren’t receiving the savings borne by other entities, including private insurers and government payers.