We’ve all got a soft spot for tough-talking TV doc, Dr Eva Orsmond.

From ruffling feathers in Operation Transformation to treading on toes in Dancing With The Stars, the Finnish doctor tells it like it is, and we love her for it.

She’s clearly thriving on her own healthy regime — can you believe she’s 53? — and now Dr Eva is back on our screens telling us how to make sure we enjoy a ripe old age with her new two-part series, How To Live Better For Longer.

The show, which sees Eva examine the latest anti-ageing scientific breakthroughs from around the world, also sees Ireland’s favourite medic go under the microscope for the first time herself.

“I’m a guinea pig, I get brain and bone scans and they compare my results to a young guy and an older man.

“I was actually quite scared, I thought: ‘They’re testing me and the Irish people will see the results, they will know am I walking the walk as well as talking the talk’.

“I had a really tough year last year, I had two surgeries (Eva snapped a tendon in her shoulder lifting a marble chopping board) and I was in a lot of pain and on painkillers.

“With that and the lack of sleep, I was really, really worried how this would affect the tests they were doing on me.” 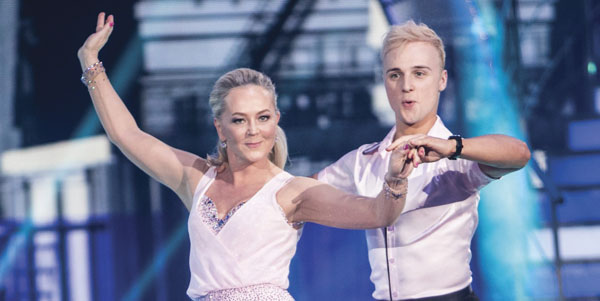 Eva Orsmond on Dancing With The Stars

Eva won’t tell us her results, saying: “You’ll have to watch the show to find out” but we find it hard to believe she passed with anything less than flying colours.

Her new series was inspired by anti-ageing hot spots, areas in the world where people regularly make it to 100 in good health.

“I went to RTE last autumn and said, ‘I’d like to go and investigate what makes certain areas, Japan, San Francisco, parts of Italy, have record life expectancies’.

Sadly, many Irish people find themselves living a very unhealthy old age, but Eva says the power to change that is in our own hands.

“In Ireland one million people are suffering from a chronic condition, which is a huge proportion of a country with such a small population, and 65 per cent of over 65-year-olds have two chronic conditions.

“We’re talking about cardio vascular conditions; asthma, diabetes, lung condition COPD, these are the four most common conditions and they are mostly lifestyle created.

“People are still in denial, but COPD is usually caused by smoking, asthma, they say, ‘Oh people can’t do anything about that’, but a huge amount of asthma is obesity-related.

“I said ‘I want to go and investigate why people age better in some areas’, RTE said well, ‘we’re not going to send you to Japan but you can do it here in Ireland’.”

Eva says one of the most important ways to ensure you age positively is to get enough sleep.

“Sleep is vital, there are 600 hormones that get mixed up if you don’t sleep. The point of the series is to inspire people to take responsibility for their own health, not to make people feel bad about themselves.”

So does she have a guilty pleasure of her own?

“I think I have them all! The reason I’m so interested in weight and healthy eating is because I have a devil on my shoulder, I just spent 10 days on holidays and I gained a few kilos.

“I love chocolate, I like white wine, Sauvignon Blanc, I need to seriously watch that and sometimes I go overboard and, like anyone, I have to make myself exercise — everybody is fighting the same demons.”

She’s famously hardcore, previously saying it was “criminal” for pregnant women to be obese, but Dr Eva says she’s just telling it like it is.

“You Irish are very gentle and polite, and caring.

“People in Ireland are scared to hurt somebody’s feelings, but I was brought up that sometimes you have to say things the way they actually are, and sometimes people need a wake-up call.”

How To Live Better, For Longer is on RTE One on Monday at 9.35pm

Read More:  How to Mislead People About Misinformation