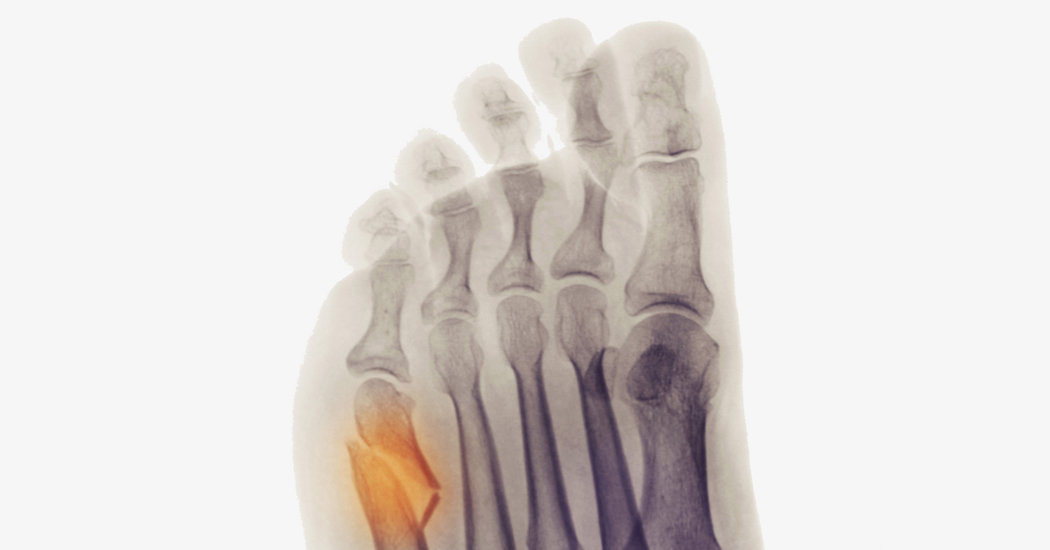 A recent essay in The New England Journal of Medicine was titled “Heart and Sole — Of Metatarsals, Meaning and Medicine.” I had to read it.

It’s not often you come across a reflection on metatarsal fractures, though they are common. I had just recovered from breaking my fifth metatarsal, the slender bone on the outside edge of the foot, so I was curious.

The author, Dr. Lisa Rosenbaum, a cardiologist at Brigham and Women’s Hospital, broke a fifth metatarsal while walking in Central Park. “My ankle rolled out of my shoe,” she wrote.

I broke mine running on a debris-strewn path before dawn. I stepped on something — a rock? a branch? — and violently twisted my foot.

We both felt an intense, stabbing pain. But there Dr. Rosenbaum’s path and mine diverged.

She was told she had a Jones fracture, a famously difficult break. She was handed a boot and crutches. She asked if she could swim, explaining “that my mental health depends on exercise.”

No, she was told: “You have a notoriously slow-healing fracture.”

When I injured my foot, I phoned an orthopedist, Dr. Justin Greisberg at Columbia University Medical Center, who suggested an X-ray. He called afterward to tell me what I had broken.

The fifth metatarsal is a very common fracture, he said, and mine was not very serious. I should use crutches as needed but could do pretty much anything I wanted to do.

I knew some things, like running, would be too excruciating to contemplate. But within a week, I had gone from using crutches occasionally to not using them at all. I was exercising on an arc trainer at the gym. A week later, I was back on the elliptical.

Read More:  Salesforce Data Recovery Service to Retire in July: Odaseva Provides Businesses with a Plan to Protect Their Data in the Cloud

I had another X-ray a month later. Dr. Greisberg told me I could start running again, as much as was comfortable. So I did. And soon I forgot about the injury altogether.

How did Dr. Rosenbaum fare? She hobbled around on crutches and used a scooter, propping up her leg on a seat. After a while, she broke the fifth metatarsal in her uninjured foot, too, because she was constantly putting her weight on it.

I asked my doctor about the discrepancies in our treatments. There are a variety of metatarsal fractures, he told me.

Most are easy ones, like mine, that don’t require anything except patience. A few rare ones, like the type Dr. Rosenbaum had, need what he called “more cautious care.”

And hers, she said in an email, needed that care. “Mine was a real Jones,” she wrote. It took three months, but now it is healed.

Thing is, some doctors treat all of these fractures conservatively.

“One of the most common second opinions I get in New York City is the fifth metatarsal fracture,” Dr. Greisberg said. “Patients sometimes can’t believe that many of these will heal no matter what they do.”

The key is to properly diagnose the fracture, said Dr. Bruce J. Sangeorzan, an orthopedist at the University of Washington in Seattle and past president of the American Orthopaedic Foot and Ankle Society.

For the unfortunate people who have the rare, difficult to heal fracture, treatment means eight weeks of putting no weight on the foot. Even with that, they may not get better without surgery because the break is in an area that does not get much blood.

But an accurate diagnosis can be elusive, said Dr. J. Turner Vosseller, an orthopedist at Columbia University. The difference between a hard-to-heal fracture of the fifth metatarsal, the so-called Jones fracture, and the more common fracture like mine is less than one centimeter.

“There can be some confusion as to which is which,” Dr. Vosseller said.

Further complicating the issue is that some fractures “straddle the line” between hard and easy to heal, Dr. Vosseller said.

One centimeter: That’s the difference between going about your business and letting the fracture heal — and winding up on crutches, maybe in a cast.

As is generally true in medicine, a second opinion never hurts.