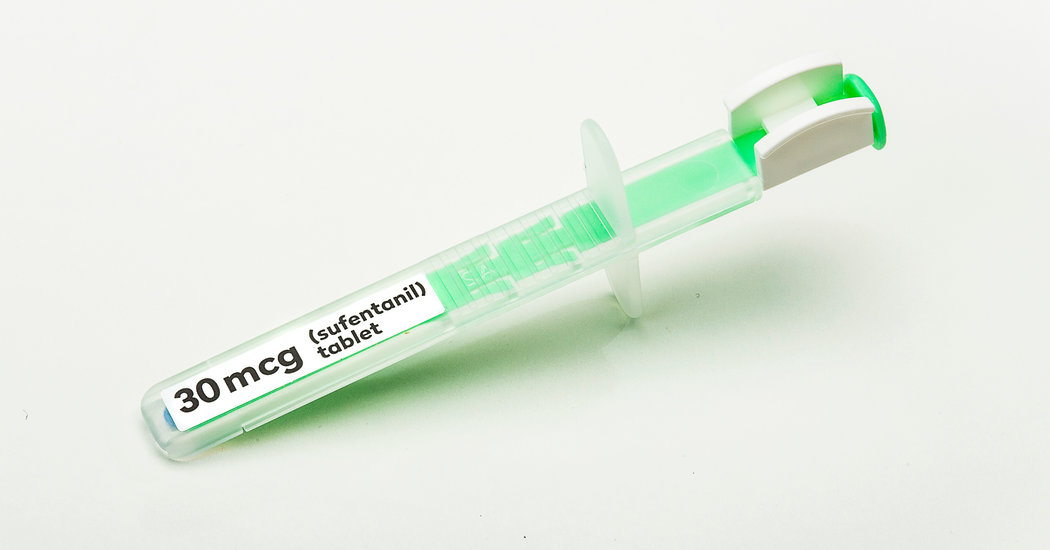 WASHINGTON — The Food and Drug Administration on Friday approved a new form of an extremely potent opioid to manage acute pain in adults, weeks after the chairman of the advisory committee that reviewed it asked the agency to reject it on grounds that it would likely be abused.

The drug, Dsuvia, is a tablet form of sufentanil, a synthetic opioid that has been used intravenously and in epidurals since the 1980s. It is 10 times stronger than fentanyl, a parent drug that is often used in hospitals but is also produced illegally in forms that have caused tens of thousands of overdose deaths in recent years.

Although the F.D.A. advisory committee charged with evaluating the new formulation ultimately recommended in a 10-3 vote last month that the agency approve it, the panel’s chairman, Dr. Raeford Brown, wrote a letter to top F.D.A. officials afterward expressing deep concern.

In the letter, which he wrote with leaders of the consumer advocacy group Public Citizen, Dr. Brown, an anesthesiology professor at the University of Kentucky, described Dsuvia, made by AcelRx Pharmaceuticals, as “an extremely divertible drug,” adding, “I predict that we will encounter diversion, abuse and death within the early months of its availability on the market.”

After the final approval on Friday, Dr. Scott Gottlieb, the F.D.A. commissioner, released a lengthy statement defending the agency’s decision. He emphasized that Dsuvia is delivered through a “pre-filled, single-dose applicator,” and said that its only permitted use will be in hospitals, surgical centers and other medically supervised settings. It is ideally suited for certain special circumstances, he said, particularly for soldiers wounded on the battlefield who might not have access to intravenous painkillers.

Dr. Gottlieb wrote that Dsuvia will not be dispensed to patients for home use or available at retail pharmacies, and that it should only be administered by health care providers with the single-dose applicators. It will likely hit the market early next year.

“These measures to restrict the use of this product only within a supervised health care setting, and not for home use, are important steps to help prevent misuse and abuse,” he wrote.

He also pointed to the agency’s new powers to require post-market studies evaluating the efficacy of opioid medications that the F.D.A. might be having second thoughts about, and to consider abuse risk as a factor in making regulatory decisions about drugs after, as well as before, they’re on the market. Last year, the F.D.A. asked the maker of Opana ER, another super-potent opioid, to take it off the market because of concerns about abuse.

Vince Angotti, the chief executive of AcelRx, said in a statement that the company would diligently follow a safety program, known as a risk evaluation and mitigation strategy, that the F.D.A. had approved for Dsuvia, including monitoring distribution of the drug and auditing wholesalers’ data; evaluating whether hospitals and other health care providers are using the drug properly; and monitoring for any diversion or abuse.

The divisions over the new drug’s approval comes after opioid overdose deaths surged to more than 40,000 last year, including more than 30,000 from fentanyl and other synthetic opioids. States and the federal governments have cracked down on the prescribing of opioids, and many chronic pain patients have complained about being undertreated or losing access to opioids entirely.

Dr. Brown, who heads the advisory committee on analgesics and anesthetic drug products, was not present for the committee vote last month. But in the letter he wrote afterward, he described trying to resuscitate doctors, medical students and other health care providers — “some successfully” — who had overdosed on the IV form of sufentanil at the medical center where he works

“It is so potent that abusers of this intravenous formulation often die when they inject the first dose,” he wrote.

Dr. Brown also questioned whether the F.D.A. would succeed in enforcing regulations once dangerous drugs hit the market.

“It is my observation that once the F.D.A. approves an opioid compound,” he wrote, “there are no safeguards as to the population that will be exposed, the post-marketing analysis of prescribing behavior, or the ongoing analysis of the risks of the drug to the general population.”

Critics of the approval include four Democratic senators — Edward Markey of Massachusetts, Richard Blumenthal of Connecticut, Claire McCaskill of Missouri and Joe Manchin of West Virginia.

In a letter to Dr. Gottlieb on Tuesday, they questioned why Dr. Brown’s committee went ahead and recommended approval on Oct. 12 without him present. They also asked why a different F.D.A. advisory group, the Drug Safety and Risk Management Advisory Committee, had not been involved.

An F.D.A. spokeswoman said that while the issue was not brought formally in front of the drug safety committee, “there were drug safety and risk experts on the committee whose expert input was taken very seriously throughout this process.”