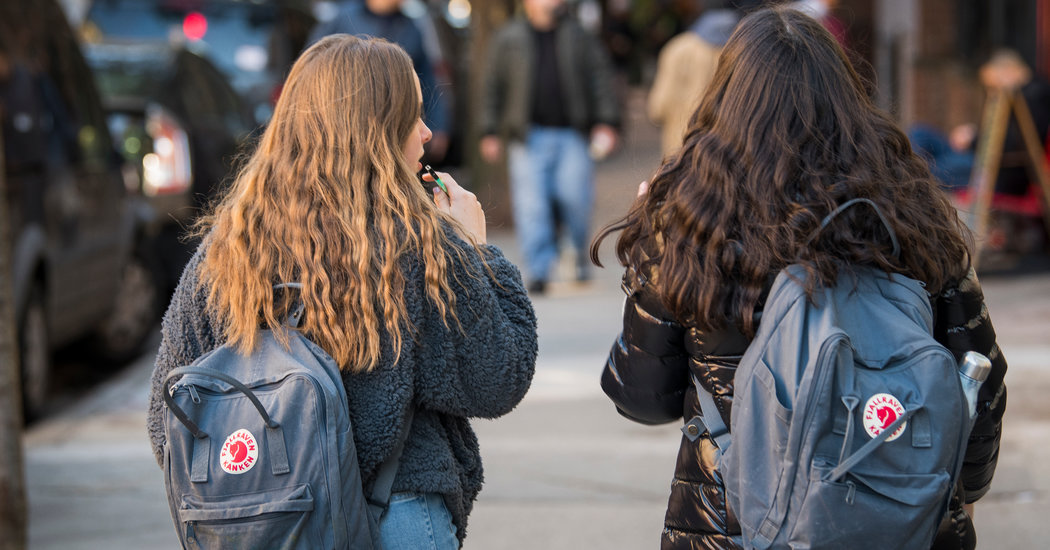 WASHINGTON — The Food and Drug Administration plans to ban sales of most flavored e-cigarettes in retail stores and gas stations around the country, in an effort to reduce the popularity of vaping among young people.

The agency also plans to require age-verification measures for online sales to try to ensure that minors are not able to buy the flavor pods.

F.D.A. officials have been weighing measures to try to curb the use of flavored e-cigarettes among teenagers. A senior agency official said details of the plan would be announced next week, and that menthol and mint flavors would be exempt from the restrictions. The F.D.A. stopped short of including menthol flavors in the vaping sales ban, partly out of concern that some users would switch to traditional menthol-tobacco cigarettes.

“In order to close the on-ramp to e-cigarettes for kids, we have to put in place some speed bumps for adults,” Dr. Gottlieb said.

Tobacco companies have fought cutting flavors from e-cigarettes, saying they are not aimed at youths but at adults who need them as a way to transition from tobacco cigarettes. But health advocates point to the packaging and youth appeal of a variety of flavors, including chicken and waffles, rocket Popsicle and unicorn milk as well as fruity tastes like mango.

Dr. Gottlieb has called the attacks on flavored products an “unfortunate trade-off” because they could restrict access to alternatives for adults trying to quit smoking. But, he also said parents should consider their children’s use of e-cigarettes a serious health threat.

Read More:  How long does bloating last after anorexia

“I think that there’s a perception that e-cigarettes are a safer alternative for kids,” he said, “but it can lead to a lifelong addiction, and some percentage will migrate to combustible products.”

The agency’s plans were reported earlier by the Washington Post.

The F.D.A.’s crackdown on flavored e-cigarettes began earlier this year, as the numbers of teenagers vaping reached epidemic proportions and the popularity of such devices soared.

Juul, the blockbuster start-up, has been a primary target of agency regulators, lawmakers and concerned parents because of its dominant share of the market. Its device resembles a flash drive, and has had a stunning appeal among youths ever since it was introduced.

Dr. Gottlieb focused on Juul and several other major e-cigarette makers in September, warning them to stop marketing to teenagers or risk being banned. He set a 60-day deadline for the major companies to prove they could keep their devices away from minors, and that timetable ends this weekend.

At the same time, the F.D.A. also warned 1,100 retailers to stop selling the devices to minors, and issues fines to some of them.

The latest actions follow months of meetings between the F.D.A. and e-cigarette makers over how to prevent teenagers from getting hooked on their products.

Juul, which has more than 70 percent of the nation’s e-cigarette market and has become ubiquitous in many high schools and middle schools, submitted thousands of pages of marketing documents and related materials. But the regulators, not satisfied, then visited the company’s San Francisco headquarters in September and seized more.

Read More:  These are the most sleep deprived jobs, according to new study

The four other products facing the 60-day deadline were RJR Vapor Co.’s Vuse, Imperial Brands’ blu and devices made by Logic. None of the companies responded to immediate requests for comment.

RJR, Imperial and Altria are all major tobacco companies, which along with other industry heavyweights have viewed e-cigarettes as critical to their survival now that smoking rates have declined to their lowest levels in the United States.

In a new report, the Centers for Disease Control and Prevention said that the cigarette smoking rate in the United States dropped to an estimated 14 percent of adults in 2017. That is a 67-percent decline from 1965, when a national health survey began tracking smoking rates.

In a statement last week, Dr. Gottlieb said that some of the companies he had met with also seemed to support raising the minimum age for buying tobacco products sales to 21 years.

Last year, Dr. Gottlieb gave the e-cigarette manufacturers five more years to meet standards that they prove their products are a safe alternative to tobacco cigarettes. The agency is also considering requiring lower levels of nicotine in cigarettes, although some companies have questioned how much authority the F.D.A. has to impose tougher limits.