WASHINGTON, D.C. — Sixty-three percent of Americans describe the U.S. healthcare system as being in a “state of crisis” (14%) or having “major problems” (49%), which is one of the least negative assessments in Gallup’s trend since 1994. 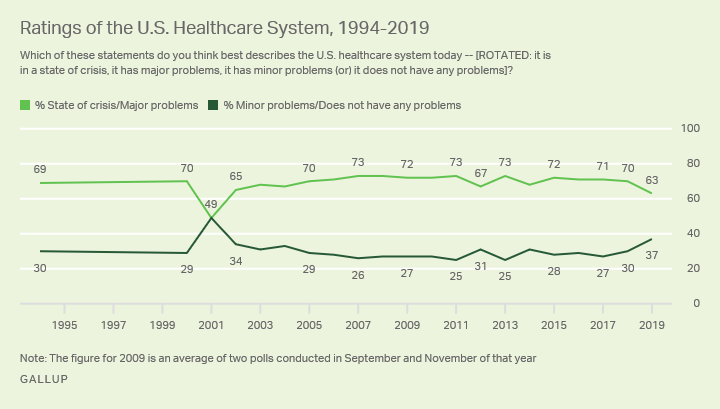 These data are from Gallup’s annual Health and Healthcare poll, conducted Nov. 1-14.

The 63% currently rating the system negatively is below the average of 69%, tracked by Gallup since 1994. Only once, in November 2001, did the figure stray far from the average when it dropped to 49%. That record low came just after the terrorist attacks on 9/11 when Americans’ views were temporarily more positive on a variety of measures.

Negative Views of Healthcare System Continue to Drop Among Republicans

Criticism of the healthcare system tends to be higher among adults who identify with the opposing party to the sitting president than among the president’s own partisans. 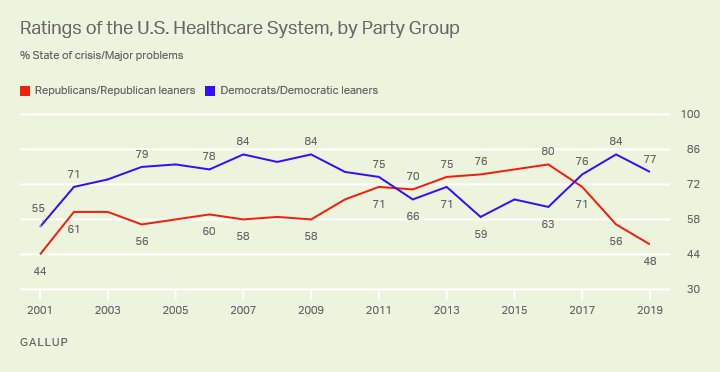 Americans’ perceptions of the state of the U.S. healthcare system have been steady, with between 60% and 70% assessing it as having at least major problems. This has been consistent across four presidencies with differing approaches to healthcare policy.

Read More:  Consumers are losing the war against meat antibiotics

The last major effort at reform — the passage of the Affordable Care Act — demonstrably lowered the uninsured rate and expanded coverage for pre-existing conditions. But the political parties’ polarized reactions to the bill’s passage suggest that a truly bipartisan effort at reform may be what’s needed to assure the majority of Americans that the system’s problems have been addressed.

Learn more about how the Gallup Poll Social Series works.