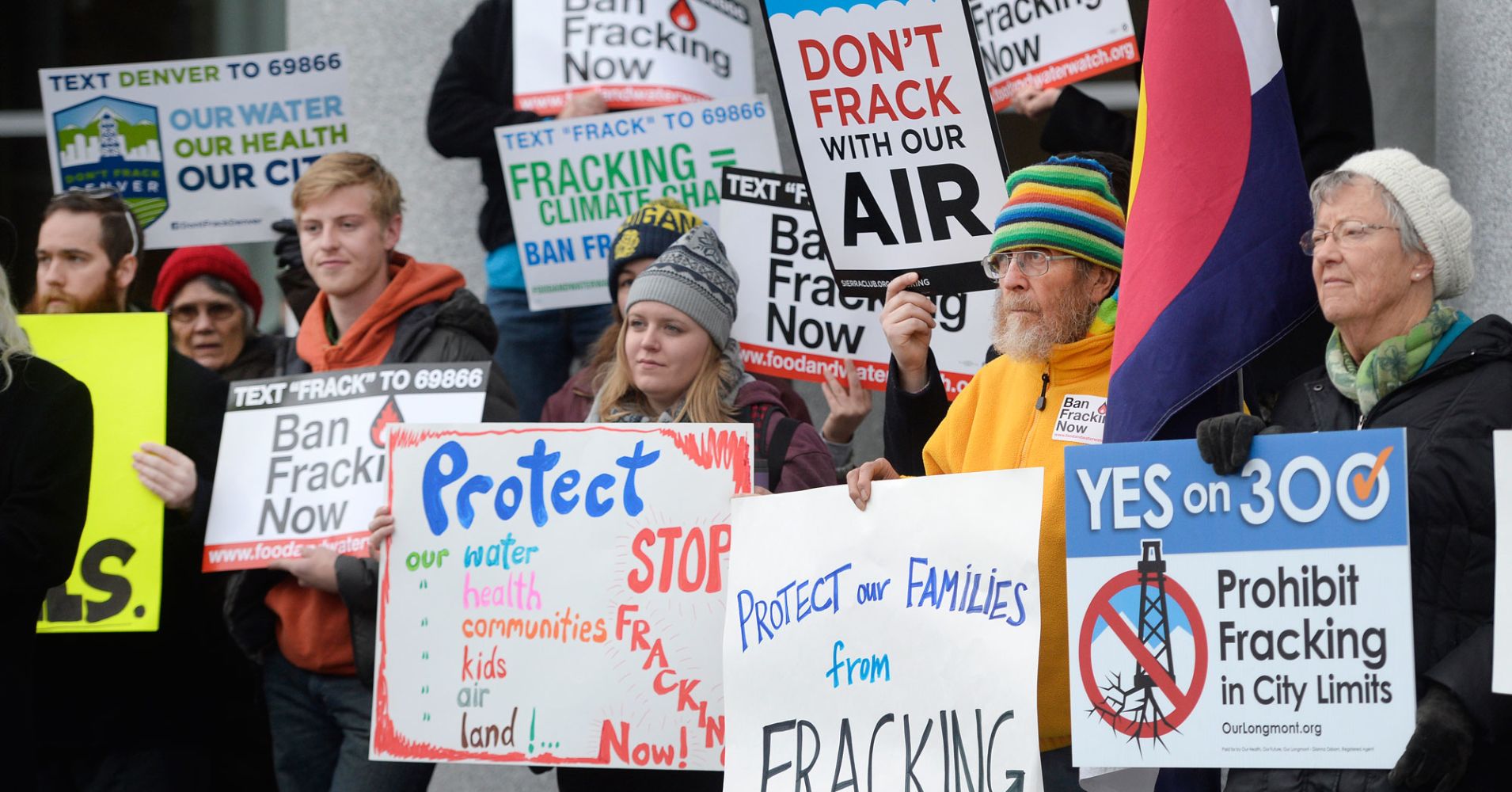 VOTERS IN COLORADO NEXT month will weigh in on what’s shaping up to be the environmental showdown of the 2018 election cycle: whether to approve larger setbacks for oil and gas facilities that would make most of the state off limits to new fracking operations.

The measure is one of a handful of environmental questions on state ballots this year, from a new carbon fee in Washington to higher renewable energy standards in Arizona and Nevada. But the Colorado proposal is the one that most directly pits residents against the oil and gas industry, potentially roping off 85 percent of non-federal land in Colorado from new drilling operations.

It reflects a fundamental clash between an industry that’s transformed Colorado into a top-10 oil producer in the U.S. and a booming residential population whose homes, schools and hospitals have crept ever closer to oil and gas sites.

“Industry is hitting saturation point, and people are saying, ‘This is good, but why are you putting this next to a school?” says Jim Alexee, director of the Colorado Sierra Club. “People are just getting fed up and are genuinely concerned. So oil and gas has a right to be worried.”

If approved, the measure would mark the first time in the U.S. that voters – not a legislature or governor – green-light statewide curbs on fracking operations, which use mixtures of water, chemicals and other materials to extract oil and gas from porous shale rock formations.

The blow to the oil and gas sector, meanwhile, would be considerable, threatening – or promising, depending on one’s view – to galvanize similar grassroots efforts across the U.S. Three states in the U.S. have banned fracking: New York and Vermont did so in 2012, and Maryland followed suit last year.

The Colorado referendum, Proposition 112, would require new wells be at least 2,500 feet from occupied buildings such as houses and schools, as well as parks, fresh water sources and other green spaces “designated for additional protection.” It would also grant state and local governments new powers to set yet more stringent setback requirements.

Read More:  You can now buy freezable bra pads to stop your boobs sweating in this heat

Oil and gas sites are presently required to be at least 500 feet from residential buildings and 1,000 feet from high-occupancy buildings such as schools and hospitals. Those setbacks, however, were only instituted in 2013 – meaning Colorado residents may live as close as 150 feet to a well, compressor station, or other oil and gas site.

The potential consequences of such proximity were underscored last year in Firestone, about 30 miles north of Denver, when a home located 178 feet from a well exploded, killing two people, after gas seeped from a leaking pipeline.

“The public has grown tired of it: ‘Hey, I just bought this $ 750,000 house, and now there’s fracking next to it,'” Alexee, of the Colorado Sierra Club, says. “They’re thinking about the health impacts. And they’re just pissed that this is happening in their backyards.”

If approved, about 54 percent of the total land surface in Colorado would become off-limits to drilling and about 85 percent of non-federal land, according to a state analysis published in July.

The measure represents the third time in four years that Colorado has considered expanding the setbacks for oil and gas firms. A campaign for similar measures in 2014 was halted at the last minute as environmental advocates and oil and gas groups reached a compromise. A subsequent attempt in 2016 fell short of the signatures needed to put the question on the ballot.

The odds of passage are long again this year: Energy firms have outspent the referendum’s supporters by more than 3:1, and top politicians in both parties – including the Democratic and Republican candidates for governor – have said they oppose the measure. But according to a poll reportedly commissioned by oil and gas firms, the referendum was recently expected to pass with as much as 60 percent support.

“There’s just an immediate statement being made here by voters in November about whether they want fracking to be happening right now in their backyards in their state,” says Julian Noisecat, a policy analyst with 350 Action, the political arm of environmental advocacy group 350, and which has donated more than $ 20,000 in support of the referendum.

Colorado Rising, a local environmental advocacy group that collected 171,000 signatures to put the measure on the ballot, and other supporters of the referendum argue that the larger setbacks are about protecting public health, not hogtying the oil and gas industry.

“I moved to Colorado a few years ago with the expectation that I was going to be moving to this pristine environment, with crystal-blue air and this emphasis on outdoor recreation and health and wellness, and I arrived and realized there are 50,000 active wells,” says Anne Lee Foster, a volunteer with Colorado Rising.

Cities along the Front Range, which includes Denver, Boulder, Colorado Springs and other destinations known for their proximity to hiking, biking, fishing, skiing and similar activities, have earned grades of D and F in the American Lung Association’s “State of the Air” report. Much of the pollution has apparently come from oil and gas operations.

A study published in April in the journal Environmental Science and Technology found that Colorado residents who live within 500 feet of an oil and gas site “are more likely to experience neurological, hematological and developmental health effects,” and those living as far as 2,000 feet face elevated cancer risks.

The findings corroborated studies in Pennsylvania and Texas that found correlations between proximity to oil and gas wells and a host of health impacts, including fetal death, low birthweight preterm birth, asthma, fatigue, migraines and chronic sinus inflammation.

“The citizens of Colorado decided to take the power into their own hands and write their legislation to protect their own communities from this ever-present danger,” Foster says. “It’s a collision of a dense population and an industry that feels that they answer to no one.”

Oil and gas groups, however, contend that the referendum has little to do with public health and instead is simply a campaign to hamper the fossil fuel industry. For example Energy in Depth, which was launched in 2009 by the Independent Petroleum Association of America and regularly rebuts studies on fracking, in a post in April pointed to a statement from Colorado’s chief medical officer and director of the Colorado Department of Public Health and Environment who cautioned against misinterpreting correlation as causation.

Protect Colorado, an industry-backed organization that has mobilized against the referendum, has attributed the campaign to “anti-energy groups” determined to push “an extreme ballot measure.”

“The intent of the measure was never to protect the health and safety of the public. The intent of the measure is to ban oil and natural gas development in the state,” spokeswoman Karen Crummy says. “It’s not like they were saying, ‘Can we add an extra 100 feet?’ I don’t know that it would do anything anyway – the Department of Public Health and Safety has said it wouldn’t – but they went for the most extreme initiative that they could.”

The organization contends that the referendum “would have a devastating effect on our economy,” Crummy says. An analysis by the Commonsense Policy Roundtable, a self-described free-enterprise think tank, concluded that the referendum would lead to a loss of 147,000 jobs by 2030, most only indirectly connected to oil and gas. (Three of the group’s board members have ties to the oil and gas industry.)

Protect Colorado this year has raised more than $ 26 million, and it’s on track to take in close to $ 30 million – roughly twice the national budget of 350 Action. Last month alone, it collected some $ 8 million and spent nearly $ 5 million. Meanwhile, Colorado Rising has raised about $ 630,000.

“This is not the only major ballot measure: We also have a House to win and other major races that are going on that have major climate and environmental impacts,” Noisecat, of 350 Action, says. “But this is one of the big ballot measures that are happening this election season.”