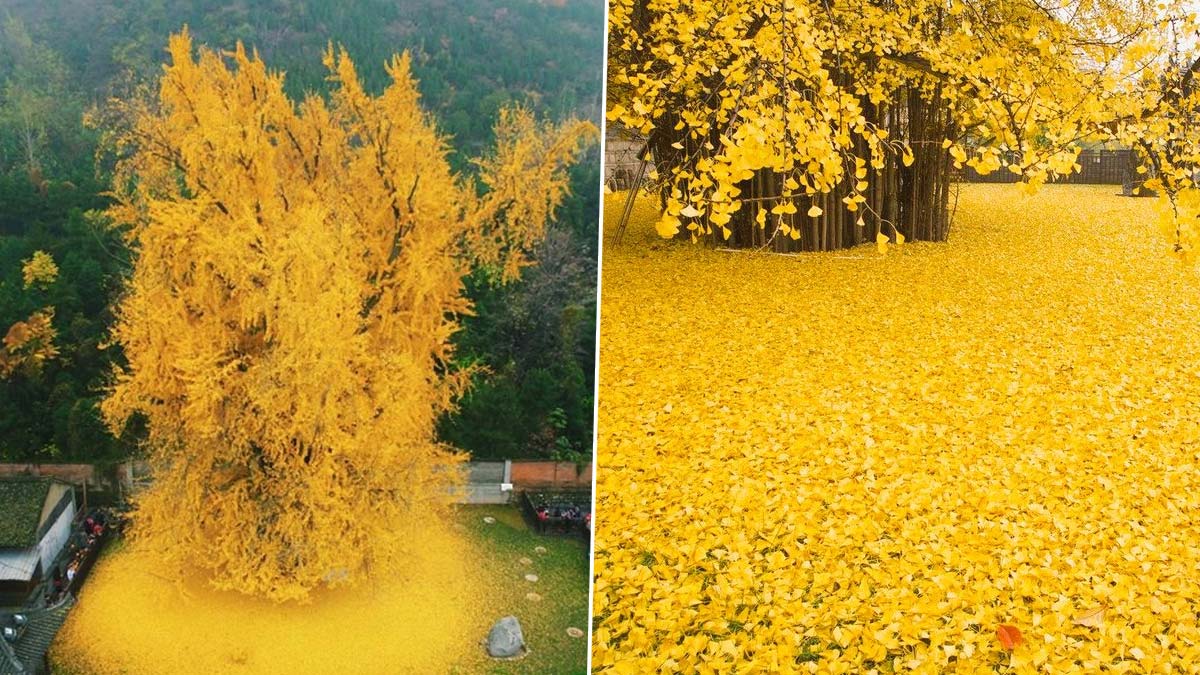 Every year, during the autumn season, when it is time for nature to turn into a splendid showcase of colours, a towering 1,400-year-old ginkgo tree showcases the transition in a spectacular way, no one should miss. Located within the walls of the Gu Guanyin Buddhist Temple, in the Zhongnan Mountains region of China, this brilliant autumnal display attracts tourists across the world. Especially, when these mesmerising photos of the fall foliage went viral on social media. Ever since then, the photos of the tree shedding spectacular ocean of fall golden leaves resurface on the internet, and it did once again this year too. When the world is stuck indoors, travellers can hardly make any plans, photos of the 1,400-YO tree giving scenic view have gone viral online. Fall Foliage 2020 in Pics and Videos: Twitterati in Bliss As They Welcome Autumn With Fall Colours in Nature.

According to the information available, it is said that the tree was planted by Emperor Taizong of Tang, or Li Shimin, the second emperor and founding father of the Tang dynasty of China (618-907). It is, in fact, more than 1,400-year-old now. The ginkgo tree, also known as a maidenhair tree, is an ancient special that is native to China. The photos show the tree’s golden autumn leaves scattered on the ground making up what is described as a ‘yellow ocean.’

Twitter user Khai shared the spectacular photos of the ginkgo tree shedding its golden beauty on the surface. The photos were clicked by Han Fei, and you cannot take your eyes off the fall beauty.

Read More:  Salesforce Data Recovery Service to Retire in July: Odaseva Provides Businesses with a Plan to Protect Their Data in the Cloud

Incredible explosion of gold from a 1400 year old Ginkgo tree

The ginkgo tree is a tourist attraction in China. People from across the world travel during this time to catch the mesmerising view of nature. Visitors are supposed to make reservations in advance to enter the temple and can only do so through China’s most popular messaging app, WeChat.

The changing of colour and the falling of the leaves marks the start of autumn and it is something that is being celebrated around the tree. In addition to the magical yellow colour that it adopts in the fall, this particular species of tree is also beneficial. It serves as a source of food and equipped with various medical benefits that are recognized in traditional Eastern medicine.

(The above story first appeared on LatestLY on Oct 11, 2020 03:31 PM IST. For more news and updates on politics, world, sports, entertainment and lifestyle, log on to our website latestly.com).