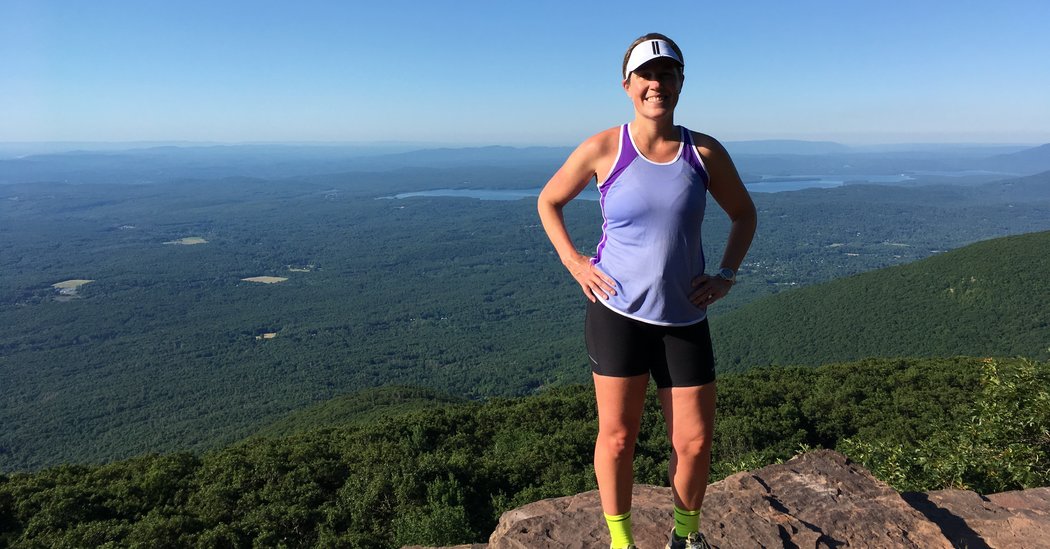 I’ve spent part of this week planning my summer vacation. If you’re like me, vacation planning also means “where am I going to run?” planning.

In 2017, I finished my quest to see all 50 states, and I’ve gone on some big road trips since then (including driving cross country and back last June). I’ve tried to run as much as I can along the way, not only to maintain my fitness, but to see new things.

So here are cool places I’ve run, both while traveling and close to home. It’s not a “best places to run” list because I haven’t run everywhere, and if your favorite run is not on this list, most likely I haven’t run there yet!

Tell me about it on Twitter and maybe I can add it to my running bucket list. I’m at @byjenamiller.

Acadia has 45 miles of gravel carriage roads, which are perfect for a run of any length. You can also challenge yourself by going up Cadillac Mountain, which tops out at 1,529 feet. I got a bit lost on the mountain trail there in 2018, so I finished by running on the paved road that cars use to get to the top. People who passed me on their drive up applauded when I reached the summit.

This pretty paved trail, which runs along the Aldridge Creek, is just over four miles. It’s shaded most of the way, which is critical if you’re running in Alabama in June, which is when I ran it in 2017.

Not only are you part of a flow of runners without feeling overwhelmed by crowds, but there are also plenty of places to stop for food and restrooms. Registration for the New York Road Runners’ New York Mini 10K, a women’s race that circles the park, just opened on Thursday.

Flat sand and gorgeous sunrises: What’s not to like about running on Daytona’s beach? For the full Daytona experience sign up for the Daytona Beach Half Marathon, where you start and finish on the Daytona International Speedway (and run to and from the beach in between). It’s already been run this year, so you’ll have to wait until Feb. 9, 2021, for your chance.

For this Philadelphia park, I recommend the 8.4-mile ring around the Schuylkill. Almost every major race in Philadelphia uses at least one side of this loop — and the Philadelphia Marathon uses both. It also connects to trails that take you to Wissahickon Valley Park Trail System if you’re looking to run on unpaved roads.

If you’re like me and live at sea level, this trail is really high up: between about 8,500 and 9,000 feet. But it’s mostly flat, so it’s a good spot to run while you get used to the elevation. My dog also liked to run into the Fraser River itself, which you can enter at multiple points along the way.

This New Jersey park may not be on everybody’s list, but I’m biased because I have been coming here my entire life. My parents first took me when I was a baby and then as a kid to play on the playground. Now, as an adult, it’s one of my regular running routes. It has a small creek, shade and a new water fountain near its outdoor amphitheater. To extend your run, hook into the paved path around Audubon Lake.

Read More:  In the Running World and Beyond, Being #BraveLikeGabe

I stopped here overnight on a road trip and wondered why it was called Idaho Falls. I found out the next morning when I ran along the city’s Greenbelt Trail and smack into the falls themselves, which are 600 feet wide. The trail covers five miles on both sides of the Snake River. You can hear the thunder of the falls on most of it.

There are a lot of places you can run at the Indiana Dunes, which includes both a state and national park along Lake Michigan, but I recommend the 3 Dune Challenge, which is a 1.5-mile course up three of the tallest dunes in the state park portion: Mount Jackson (176 feet), Mount Holden (184 feet), and Mount Tom (192 feet). It’s challenging because the dunes are at 40-degree slopes and the trails are sand, which means you need to work hard to keep your footing.

This park, which is named after the last reigning monarch of Hawaii, is the largest ornamental Japanese garden outside of Japan. It has ponds, rock gardens, pagodas and a Japanese teahouse. It’s also not far from Hilo’s hotel district, so you can get to and from this run on your own two feet.

I know Glacier National Park gets a lot of the Montana trail attention (and for good reason — I’ve been there, and it’s gorgeous), but one of the prettiest runs I had in all of 2017 was in this state park. It also has fossil remains of a T-Rex, if you’re into dinosaurs.

It’s a steady climb to get to the top of Overlook Mountain, which summits at 3,140 feet. But it’s worth it, not just for the views of the Hudson Valley (which are, of course, stunning), but because of the Overlook Mountain House, or what’s left of it. It’s one of the weirdest things I’ve ever encountered while running.

Edwin Warner Park and Percy Warner Park make up what’s collectively known as the Warner Parks, right in Nashville. It has both paved and unpaved trails. I went deep into the woods on this run, stopping to look at little, dribbly waterfalls that had sprouted up after a rainy day. It’s a cool spot, both literally and figuratively.

Forward it to your friends, and let them know they can sign up here.