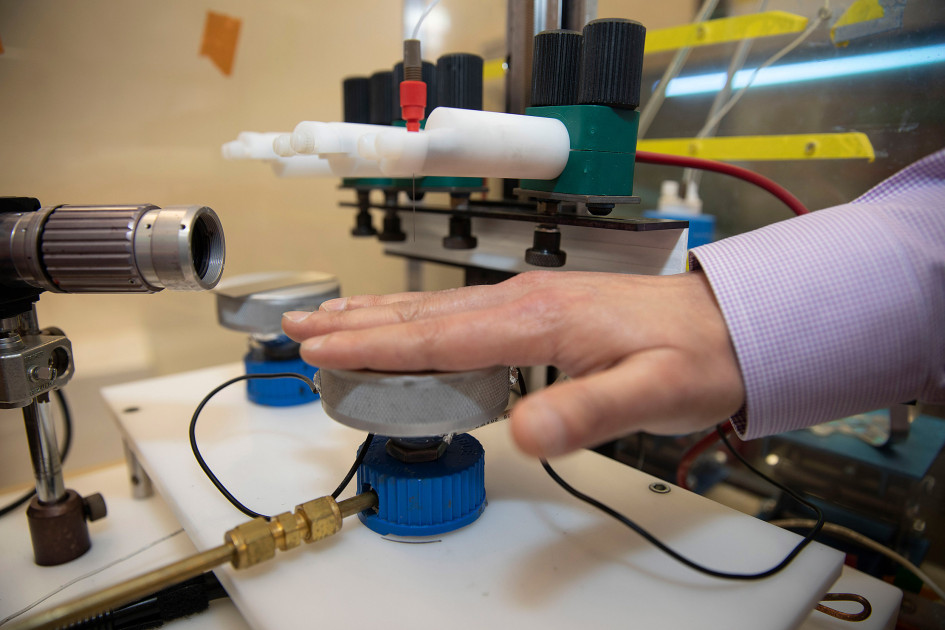 GAZETTE: So the technology involved here — the engineered water nanostructures — is a couple of years old. What’s new is the application?

DEMOKRITOU: We have the tools to make these engineered nanomaterials and, in this particular case, we can take water and turn it into an engineered water nanoparticle, which carries its deadly payload, primarily nontoxic, nature-inspired antimicrobials, and kills microorganisms on surfaces and in the air.

It is fairly simple, you need 12 volts DC, and we combine that with electrospray and ionization to turn water into a nanoaerosol, in which these engineered nanostructures are suspended in the air. These water nanoparticles have unique properties because of their small size and also contain reactive oxygen species. These are hydroxyl radicals, peroxides, and are similar to what nature uses in cells to kill pathogens. These nanoparticles, by design, also carry an electric charge, which increases surface energy and reduces evaporation. That means these engineered nanostructures can remain suspended in air for hours. When the charge dissipates, they become water vapor and disappear.

Very recently, we started using these structures as a carrier, and we can now incorporate nature-inspired antimicrobials into their chemical structure. These are not super toxic to humans. For instance, my grandmother in Greece used to disinfect her surfaces with lemon juice — citric acid. Or, in milk — and also found in tears — is another highly potent antimicrobial called lysozyme. Nisin is another nature-inspired antimicrobial that bacteria release when they’re competing with other bacteria. Nature provides us with a ton of nontoxic antimicrobials that, if we can find a way to deliver them in a targeted, precise manner, can do the job. No need to invent new and potentially toxic chemicals. Let’s go to nature’s pharmacy and shop.

At this point, these engineered structures are carrying antimicrobials and are charged, and we can use the charge to direct them to surfaces by applying a weak electric field. You can also release them into the air — they’re highly mobile — and they can move around and inactivate flu virus, for example.

GAZETTE: How would this work with food?

DEMOKRITOU: This nano-enabled platform can be used as an intervention technology for food safety applications as well. When it comes to disinfecting our food, we’re still using archaic approaches developed in the ’50s. For instance, today we put our fresh produce into chlorine-based solutions, which leave residues that can compromise health. It leaves behind byproducts, which are toxic, and you have to find a way to deal with them as well.

Instead, you can use the water nanoaerosols that contain nanogram levels of an active ingredient — nature-inspired and not toxic — and disinfect our food. Currently, this novel invention is being explored for use — from the farm to the fork — to enhance food safety and quality.