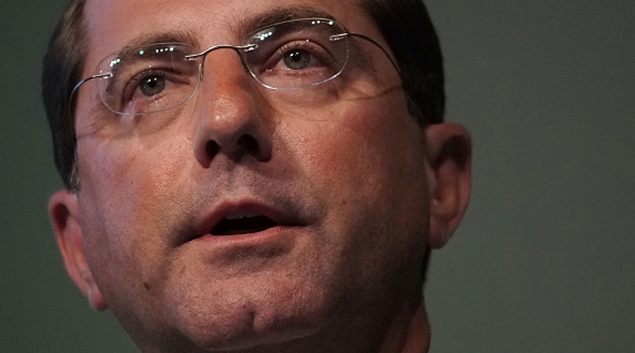 Health and Human Services Secretary Alex Azar and Acting Food and Drug Administration Commissioner Ned Sharpless today laid out a plan for the importation of prescription drugs intended for sale in other countries.

Other countries pay lower prices for the same drugs, Azar said. Two pathways under the Safe importation Action Plan would get the drugs into the hands of Americans as a less expensive alternative.

In recent years, multiple manufacturers have stated they wanted to offer lower cost versions but could not readily do so because they were locked into contracts with other parties in the supply chain, Azar said.

The landscape has changed, he said. Large distributors and a maturation and development of the supply chain is allowing systems to be managed across borders.

Through proposed rulemaking, states, wholesalers and pharmacists are to  propose pilot or demonstration projects outlining how they would import certain drugs from Canada that are versions of FDA-approved drugs.

They must ensure the importation poses no additional risk to the public’s health and safety and that the demonstration projects would achieve significant cost savings to the American consumer.

“This could be an opportunity for a pharmacy to import drugs and introduce them in the supply channel at a lower list price,” Azar said.

Azar said he’s had discussions with the Canadian health minister, but that working out the plan would be an issue for states, pharmacies and wholesale distributors.

Applicants must demonstrate how they would track and trace requirements to allow drug tracing from manufacturers to pharmacy; meet labeling requirements; and importation entry requirements. They must also be able to meet post-importation requirements such as adverse event reporting and procedures to facilitate recalls.

Under this pathway, manufacturers would use a new National Drug Code (NDC) for these products, potentially allowing them to offer a lower price than what their current distribution contracts require.

To use this pathway, the manufacturer or entity authorized by the manufacturer would establish with the FDA that the foreign version is the same as the U.S. version and appropriately label the drug for sale in the U.S.

This pathway could be particularly helpful to patients with significantly high prescription drug costs, Azar said. Medications could include insulin to treat diabetes, as well as drugs used to treat rheumatoid arthritis, cardiovascular disorders and cancer.

High drug costs have become an issue for Congress and in the 2020 election. Democratic candidates have given examples of how Americans are crossing the border into Canada to buy the same drug at a less expensive price.

More generic drugs have come on the market after getting FDA approval, with the Council of Economic Advisors estimating the savings generated from generics in the first 18 months of the Trump Administration to be $ 26 billion, according to HHS.

“The FDA has a unique role to play in promoting competition that in turn can help reduce drug prices and improve access to medicine for Americans,” Sharpless said.

“Americans are fed up with paying the highest prescription drug prices in the world. We know from our research that lowering drug prices — specifically via importation — is an issue that is widely supported by Americans across parties and ideologies: 81% of Republicans, 77% of Democrats, and 85% of independents support safe importation of prescription drugs,” LeaMond said. ‘The Food and Drug Administration has long had the authority to approve importation plans, but has rarely done so. Today’s announcement is an important signal that the administration agrees that lower priced drugs can be safely imported and that the FDA should use its full authority under law to help American consumers.”