Gary Schwitzer is the Founder & Publisher of HealthNewsReview.org. He tweets as @garyschwitzer.

Australian researchers at the University of Queensland reported that “a quick and easy test to detect cancer from blood or biopsy tissue could eventually result in a new approach to patient diagnosis.”

A news release quoted one of the researchers: “We certainly don’t know yet whether it’s the holy grail for all cancer diagnostics.” He also used that hyped-inducing word “breakthrough” to describe his findings.

It was all too tempting for some news outlets.

USA Today used “holy grail” and “breakthrough” in its headline. 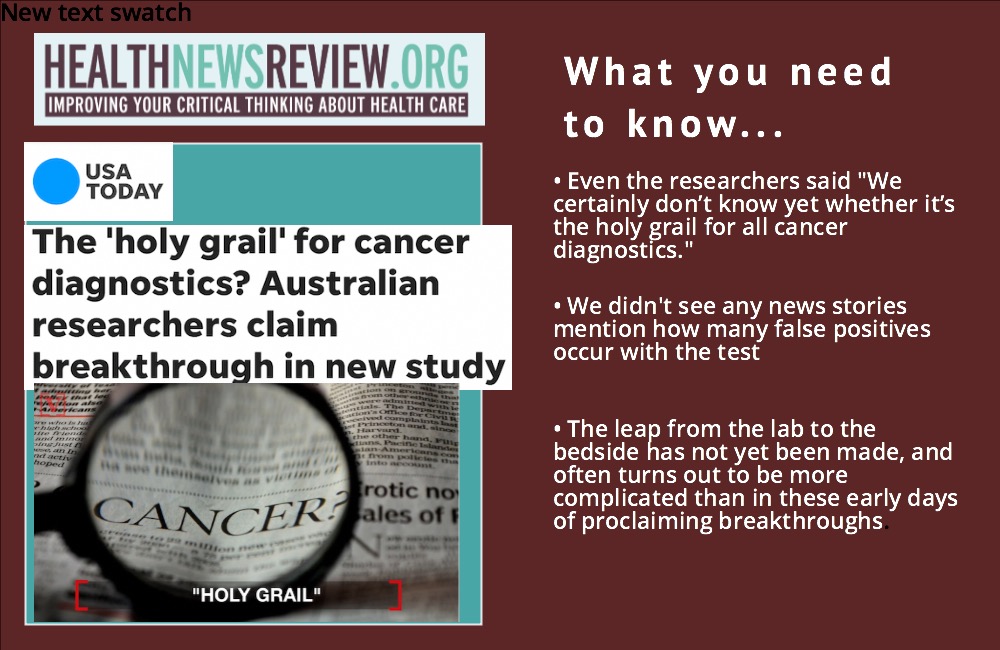 The researcher added that “it looks really interesting as an incredibly simple universal marker of cancer.”

I have often said that anytime you hear about a “simple cancer test,” run for the hills because there’s no such thing. This researcher may be referring to the technology, but the application of that technology – the leap from lab to bedside – brings with it many levels of complexity.

That complexity wasn’t acknowledged in some news stories.

The Guardian reported: “The test has a sensitivity of about 90%, meaning it would detect about 90 in 100 cases of cancer. It would serve as an initial check for cancer, with doctors following up positive results with more focused investigations.”

As consumers try to digest this news, I think it’s important to think about those numbers.  What if you had cancer and you were one of the 10% whose true cancer was not detected? Then the claim of an incredibly simple universal marker starts to sound a bit hollow.

Read More:  Here’s the skinny on fasting for weight loss – the 5:2 diet - Inverse

In my scan of the news today, I haven’t seen any news stories discuss what the specificity of the test is.  In other words, when it says it has found cancer, did it really find cancer or something else? If a screening test isn’t very specific, it finds a lot of false alarms that entail more tests — that can include radiation and invasive biopsies — and needless anxiety. On Twitter today, @WorkWithCancer wrote: “Although it is good news we think there’ll be issues with the process and timing of follow up to find out what the cancer is and where. ‘Scanxiety’ is real and we predict it’ll multiply hugely as people wait for further test.”

To its credit, USA Today reported that one UCLA researcher “is more concerned about the false positive rate than the 90 percent accuracy rate. Because cancer is uncommon, it is more important to prevent false diagnoses, he said.”  I agree.  Knowing sensitivity but not specificity is an incomplete picture. (Read our primer on “Understanding medical tests: sensitivity, specificity and positive predictive value.”)

CNN also reminded readers that this isn’t the only such research making waves.

Earlier this year, researchers at John Hopkins University in the US announced they’d developed a blood test, called CancerSEEK, that screens for eight common cancer types. That test identifies the presence of cancer proteins and gene mutations in blood samples. Much more research needs to be done before that test can be widely used, the US researchers added.

So, let’s just chill about breakthroughs and holy grails for now.  Applaud the science, the pursuit, the goal.  But hold off on making incredibly hyperbolic statements about an incredibly simple universal marker of cancer.