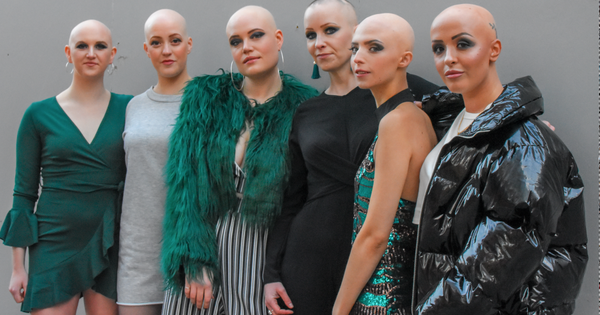 Sixteen years ago, Nichola McAvoy was diagnosed with alopecia. Despite being surrounded by people who support her, traveling the world has meant she has often had to find new friends who are just as understanding.

But forming relationships with people who get you and the things you’re going through isn’t always easy. Nichola is looking to fix this issue with Ally, a global mobile app and website for people with alopecia to use to connect and make friends.

“I have had alopecia for 16 years and have been fortunate enough to have a friend that also has alopecia (also called Nicola), from a young age. Our friendship has always been so important to us both as we can support each other in ways other people can’t, and we’ve never felt,” she says.

“When I’ve moved away to new cities and away from Nicola, I’ve wanted to make new friends with alopecia, but found it difficult to do. So I started researching into whether others felt the same way and if they like the idea of joining a digital platform to connect with other people that have alopecia. The response was immensely positive so I started planning to create Ally and we launched in November last year.”

Through this platform, Nichola hopes to eradicate isolation for people living with health conditions such as alopecia. She explains: “Peer to peer support has proven to be very effective for helping rebuild people’s confidence and letting them know they’re not alone.

“With alopecia, the main side effects are psychological. When people lose their hair, they can feel like they’re losing a key part of their identity. This often leaves them with low self-esteem. We’ve seen first hand, the power of community for bringing people back out of their shells and for helping people regain their confidence.”

When it came to designing the app, Nichola wanted it to be easy to use as possible so that people can log in and start making friends quickly. “Members can either download Ally or sign up via our website and search for other people by age, location, interests, gender and by alopecia type. It’s available globally and we have people using Ally all over the world in places like the US, Germany, Australia and even in remote places like the Faroe Islands,” she says.

“Our member’s favourite feature is the ability to filter profiles by location. Most people are joining Ally to chat to other local individuals, and will often meet-up in person after they have been speaking on Ally for a little while.”

For Nichola, her biggest success is when she hears about people finding friends via the app. She continues: “There are two women, only living a short drive away from each, near Barnsley that discovered each other on Ally earlier this year. Neither had met anyone else with alopecia before and they now regularly meet up as they have kids a similar age, that like to hang out too.”

“Another success in itself was launching the app in November last year. Launching a project like this takes a lot of hard work and planning so we’re very pleased it’s out in the world and lots of people are already reporting to have found friends. We’re just excited to keep growing our member base and to hear more lovely stories from them all.”

However, she admits that things haven’t always been easy throughout her startup journey. “The biggest challenge I have faced is quite personal to me. As I have lived experience with alopecia, sometimes when I hear other members stories, it can be very emotional. Fortunately, though, I am in a great place and have come to accept, if not love my bald head! My mission now is to help others get to that place of acceptance too,” says Nichola.

With around 2000 users already signed up to the platform, Nichola’s next mission is to scale it globally and add new features. She concludes: “Ally’s members base of people living with alopecia – is growing across the world and we’re seeing people make amazing, important friendships. Now that we’ve seen how well Ally is working for our members living with alopecia, we’re planning to make the platform available to people with other health conditions soon.”