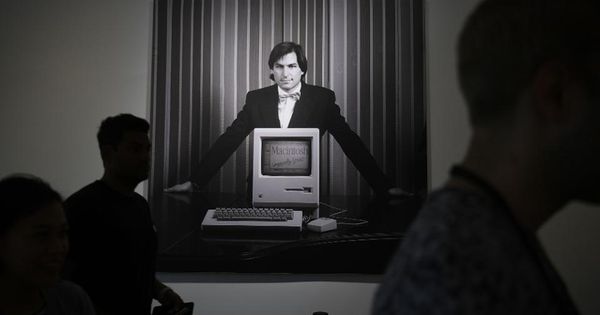 The silhouettes of people walking past a photograph of Steve Jobs. Photographer: David Paul Morris/Bloomberg

Steve Jobs bestrides the recent history of entrepreneurialism like a colossus. He has been called the greatest entrepreneur of our time. He revolutionized at least three industries: computers, music, and movies. Bill Gates, Sergey Brin and Larry Page, Jeff Bezos, and Mark Zuckerberg also have their advocates as candidates for the current crown. Who’s the greatest of all time? I’ve argued for Sam Walton. All-time lists usually include him along with other immortals like Andrew Carnegie, Henry Ford, Walt Disney, Thomas Edison, and—inevitably—Jobs.

But how we can we compare these legendary entrepreneurs across disparate eras, incommensurable financial measures, and widely varying industries? Let me suggest one handy way: the “Josiah Wedgwood Scale.”

In researching a book on the history of entrepreneurship, I have found no entrepreneur more innovative than Josiah Wedgwood. He pioneered world-changing innovations in six critical areas—multiple technologies, design, production, merchandising, sales, and marketing—against which you can measure other entrepreneurs and your own efforts, as well as uncover areas where you can explore potential opportunities.

Wedgwood was born in 1730, some 30 years before the onset of the industrial revolution. His prospects were not good. He was a sickly twelfthchild of a struggling fourth-generation potter in Burslem, a tiny isolated village in England. Clay permeated the soil there—potters could grab the clay they needed from the ruts made by carts and carriages (hence the term “pothole”). Despite his meager upbringing and education, Wedgwood was responsible for many firsts that not only revolutionized pottery-making but also transformed how business has been conducted ever since. Cotton tycoons get most of the credit for instigating the industrial revolution, but it was Wedgwood they all watched and copied. Here’s what he did in each of those six critical areas:

Multiple technologies: Believing that truth emerges through investigation and observation, he regularly worked late into the night inventing new glazes and production techniques. He kept meticulous notes (in code) on each experiment he conducted. Technology got him his first big break as an entrepreneur. In 1765, Queen Charlotte, wife of George III, invited him to submit samples for a new tea set. His “creamware” glazing technology won the high-profile order because the addition of the secret ingredient of Cobalt made it more uniform, more richly cream colored, and better able to take gilding than anything else then available. Later, after more than a thousand experiments, he perfected the jasperware technology that the world now calls Wedgwood. Not so well known, but globally important to this day in the production of ceramics, was Wedgwood’s invention of the pyrometer, which more accurately measures high temperatures in an oven or kiln. This innovation won him membership in the prestigious Royal Academy and enabled him to produce his complex designs more reliably and at a lower cost.

Design: Wedgwood used the technologies he innovated to create designs that dazzled potential customers. Potters from all over the world copied those designs. His original neo-classical vases, inspired by ancient Roman artifacts, and his ceramic medallions are coveted by museums and private collectors and are still produced by the company over 200 years after they were first introduced.

Production: Wedgwood’s success required him to expand his production capacity. He responded by designing a new facility that proved to be a model for factories to this day. Previously, factories were laid out as workshops with “masters” making products from start to finish, perhaps assisted by one or more apprentices. Josiah designed his factory as a linear process with a sharp division of labor. Each step in the process step was performed by an individual trained to perform only that particular step. Cotton industrialists such as Richard Arkwright copied Wedgwood’s design, scaling output up with more automation. Wedgwood’s factory layout and organization remain the basis for high-volume factories today.

Wedgwood’s technologies and factory management techniques were so successful at producing ceramics that he had to innovate business models to stimulate more demand. Those techniques, widely copied ever since, include innovations in the following:

Merchandising: In 1772 in London, Wedgwood opened what many consider the first modern store. The location was chosen for the large windows that enabled passersby to view what was inside and to see that it was an inviting place to visit. Contrary to shop practices of that era, the store was designed to be a relaxing and comfortable place to spend time. It showcased the wide variety of products and designs Wedgwood produced by displaying them on tables and shelves as they might be in a “tasteful” person’s home. He shrewdly placed the most popular products on top of tables within easy reach of the customer and place expensive items on shelves. Apple stores today are laid out in similar fashion.

Sales: Wedgwood’s sales people were trained to educate the customer about the design as well as the quality of the products on display. They helped middle and upper class shoppers to envision Wedgwood products in their homes. Wedgwood also equipped and trained salesmen to travel around Britain, setting up in hotels or in houses of aristocrats who were friends. Today we call this practice a “trunk show.”

Marketing: Wedgwood is widely credited with creating the first brands. After Charlotte bought his tea service, he asked if he could honor her by naming his revolutionary creamware glaze “Queens ware.” What customer wouldn’t want to own a teapot resembling the Queen’s? He also wrote articles for journalists to publish under their names to describe the revolutionary nature of his jasperware so that it would be considered authentic only if it was produced by Wedgwood.

Wedgwood’s entrepreneurial efforts weren’t confined to his company. He instigated other efforts that proved beneficial to his business. For instance he induced leading business people whose workshops or farms were located between Burslem and Liverpool to invest in building a canal that would greatly speed delivery and cut costs. He also successfully lobbied Parliament to reduce tariffs and other business taxes.

Like most great entrepreneurs, he had extensive help. He had able, personally trained factory supervisors and mold-makers (similar to product designers today). He partnered with Thomas Bentley, a merchant from Liverpool who was experienced in overseas trade and who helped him set up a global distribution network. He was a member of the Lunar Society (which met when the moon was full so that they could drive their buggies home by the light of the moon). It included such distinguished members as Erasmus Darwin (whose son married Wedgwood’s daughter and fathered Charles Darwin) and John Priestly, the famous scientist. Priestly and Darwin shared their scientific methods and knowledge with Wedgwood, which he put to use in his experiments.

Based on Wedgwood’s accomplishments, I suggest a six point scale of innovation. One point is awarded to any entrepreneur who makes a comparable innovative impact in any one of the six categories outlined above. That is, an innovation widely copied within and without the entrepreneur’s marketplace or that remains a best practice for more than one generation.

In my view, anyone with a score greater than 1 is an entrepreneurial hero. Steve Jobs scores a 3—one point for the design of the modern smartphone, one point for rediscovering Wedgwood’s merchandising and retail store layout, and one point for branding Apple with simplicity and quality in electronics. Walt Disney scores a 4, which makes him number two on innovation in my book. He developed multiple technologies for synching sound to animation and for producing animated films. His design of animated characters as well as the 3-D animated figures we marvel at Disneyland have been widely emulated. He also developed techniques, such as storyboarding, that have remained essential for producing movies of all types till today. And he established multiple long-lasting benchmarks for tie-in marketing, starting with the Mickey Mouse Club (which were actual children’s clubs run by movie theatres showing Mickey Mouse cartoons).

What’s your score? And where might you add a point?