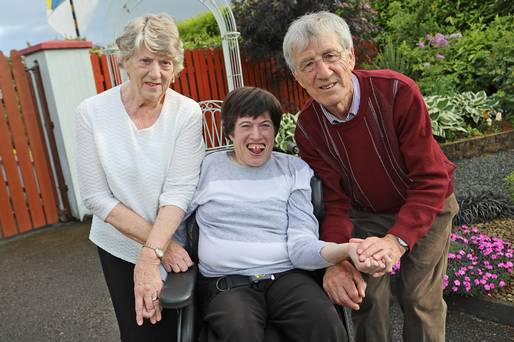 These breaks have been few and far between. They’ve never been away from home for any more than a few days at a time and have never taken a foreign holiday. Emma was born with a rare genetic condition called Angelman Syndrome which is characterised by severe intellectual disability. She is non-verbal – although she can communicate with her family very well – and has limited mobility.

At their home just outside Belturbet, Co Cavan, Kathleen and Austin – who also raised two older daughters – tend lovingly to Emma. But the stresses and strains of having to fight for everything over the years are starting to take their toll.

Austin, who worked for Cavan County Council before he retired, says a cancer diagnosis 12 years ago shook the family and a return to ill health last year caused him great stress. When he got sick last year the family asked for respite for Emma so he could get hospital treatment, but he says a decision was made that they could only get 45 minutes of help in the morning.

He explains that it takes him and Kathleen two hours to get Emma up and dressed and washed in the morning and that it just would not have been possible for him to be away from his family for any length of time if Emma wasn’t being properly looked after.

Austin refused to stay in hospital. Local politicians got involved and eventually some respite care was arranged for Emma so he could have medical treatment. But it came at a cost.

“There was a lot of hassle over it. The family didn’t need the hassle to be honest. I always thought the HSE was about caring for people, not putting pressure on people,” he says.

Austin’s plight vividly illustrates the problems facing older carers, who are themselves battling health issues. Official figures from the Census 2016 say there are 195,000 carers in Ireland and of that number 18,274 are aged over 70. However Family Carers Ireland believe the actual numbers are much higher. They cite figures from the CSO’s Irish health Survey 2015 which suggests 10 pc of the entire population over 16, or 355,000 people, are carers. Based on that 10pc figure, it’s estimated that some 63,000 carers are aged 65 and over.

“Thank God I’m good at the moment,” says Austin. “It was a recurrence of the cancer and it was outrageous that I was under the pressure I was under. I’m getting back to myself but the stress took a terrible toll on me. I was trying to negotiate with doctors and wondering how my daughter was. Eventually we did get the respite for a special reason. But I’d say there are other people in similar circumstances out there.” A huge Gaelic football fan, he used to take Emma to matches with him when he was a younger man. He can’t do that anymore and misses the sociability that came with going to the football matches. He and Kathleen get invited to parish functions but they’re not able to go and they miss the opportunity to meet up with other people.

The couple’s trip to Bundoran last month, which he describes as “like a new world”, was a brief interlude in a lifetime of worry. “All the time I worry about the future. I don’t know what the next world will bring me but I would love to know where Emma’s home would be and who will be looking after her,” he says.

“The HSE are telling us they have no plans – that there’s nothing in train. Why will they not talk to us about what the future holds? I want to know where Emma will go if I’m not able to mind her,” he adds.

Just last month the organisation published the results of a study which showed that one in three family carers have a diagnosis of depression and almost two in three carers are now providing more than 100 hours of care per week.

Marian Mahon, Carer Support and Advocacy Manager with the organisation, says it’s a common complaint: stressed-out carers, unable to sleep, unsure of the future and frazzled by constantly looking for services for their loved one.

Mahon explains that she’s currently dealing with two cases of elderly parents who can no longer care for their children at home. She says the only thing they are being offered are nursing home placements, which the families feel are inappropriate.

“These families don’t know what will happen to their loved one when they die. Nursing homes are not suitable for 30- and 40-year-olds and while there are some places, there’s not an adequate amount of them. Respite is also a problem. There’s inconsistency around the country – some places are better than others,” she says.

Getting figures on how one part of the country fares compared to another is something Family Carers Ireland is actively working on. The organisation is trying to build up a picture of exactly how many bed spaces for respite there are in different parts of the country.

“Stress is something that keeps coming up for carers. They find themselves having to fight for services all the time. If you’re not that kind of person and all of a sudden you have to arm yourself to fight, the stress and anxiety of all that can lead to ill health. What happens when the carer becomes ill? It costs the State more money. If the State looked at the bigger picture and looked after the carers, they’d save a lot of money. Can you imagine the situation if the carers weren’t there doing what they’re doing?” she asks.

At his home in Cavan, Austin Hands says it would be great if he and Kathleen could take a little break this summer. What he’d love is to join up with other couples of his and Kathleen’s age and perhaps take a bus tour of the country and make some friends. Even if it was only for a few days, he says it would be wonderful to know that they could go off and know Emma was well cared for. He doesn’t think it’s too much to ask.

To mark National Carers Week which runs all this week, Family Carers Ireland is trying to raise awareness of the work the country’s 355,000 family carers do, day in, day out. It’s estimated that family carers save the Government €10bn in unpaid care each year, collectively providing 6,608,515 hours of care per week.