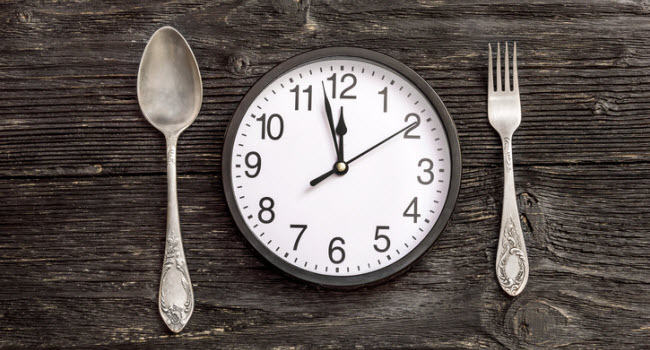 Kittrell said her lab evaluates different diets by looking at the evolutionary, historical and biological basis for them, and intermittent fasting passes all three tests.

“There’s an evolutionary basis in the sense that hunter-gatherers essentially followed an intermittent fasting diet because food was scarce. They wouldn’t necessarily know the next time they’d eat,” she said.

The metabolic switch described by Mattson reflects the biological basis of intermittent fasting, and history is full of examples of humans engaging in fasting, Kittrell said.

“It’s been used a lot for medical and religious reasons,” Kittrell said. “Ramadan is a great example of prolonged intermittent fasting.”

In the paper, Mattson lays out a couple of sample prescriptions for incorporating fasting into your daily life.

Or people could start out by fasting one day a week, with one meal on that day of 1,000 calories, and extend that to two days a week by the second month. The goal would be a single 500-calorie meal on two days each week.

Mattson and Kittrell warn that you’ll likely be uncomfortable as your body adapts to your new eating pattern.

“This is very similar to exercise programs where someone who is sedentary, they take a month or two to get in shape while their organ systems adapt to the exercise,” Mattson said.

It can take between a few weeks to a couple of months for someone to get comfortable with intermittent fasting, Mattson and Kittrell said.

“If someone typically eats breakfast and tomorrow they don’t eat breakfast, they’re going to be hungry and irritable as it gets towards lunchtime,” Mattson said. “That will be gone after two weeks to a month, if they stick with it. That’s a very important practical aspect.”

Don’t expect immediate results, either — it can take a few weeks before your body adapts to the point where you’ll start dropping pounds and experiencing improved health indicators, Mattson said.