If you want to reduce the amount of meat that you eat every day, or maybe totally exclude it from your diet, turning to meat-alternatives is one way of doing so. This way, you can still enjoy the kind of foods you used to have before. Quorn is one such meat-alternative although many people wonder whether it’s actually healthy, good for you or even safe.

I occasionally eat Quorn products as it’s convenient and makes life easy. But I want to make sure that whatever I eat is actually healthy, so I decided to spend some time researching Quorn to see how healthy it actually is. This article is a summary of my findings. 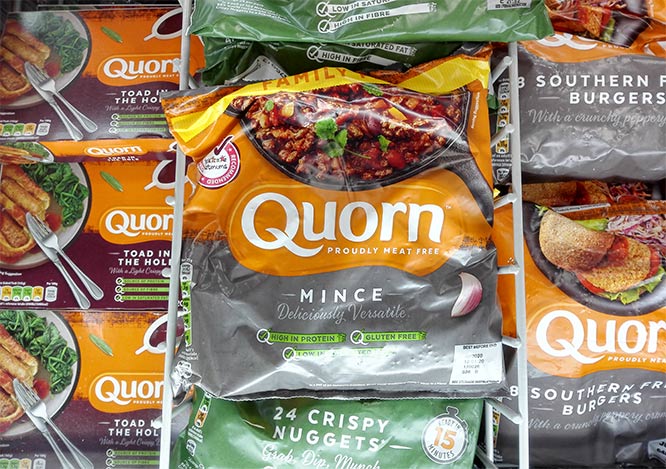 Continue reading to learn all about Quorn, how it’s made, its nutritional profile and whether it’s a good idea to eat it instead of meat.

What is Quorn and how is it made?

Quorn is essentially a protein made out of fungus. This type of protein is called a mycoprotein and it is derived from fusarium venenatum fungus which is basically a type of mould. Some people incorrectly refer to this fungus as a mushroom, but it’s not a mushroom at all.

To grow mycoprotein, producers of Quorn use the age-old process of fermentation which is the same technique as the one used to create bread, beer and yoghurt. This process is environmentally friendly since it uses 90% less land and water than producing animal protein.

Check out this YouTube video to understand more about how Quorn is made:

Although Quorn products are all vegetarian, they are not all vegan. A while back, a new vegan range was launched (certified by The Vegan Society) and producers have plans to eventually make their entire Quorn range completely vegan, although this may take some time.

Quorn can be bought in various forms (mince, fillets, pieces, etc.) and the Quorn brand offers over 100 different Quorn products to choose from (for example, vegetarian burgers, “chicken” fillet slices, vegetarian lasagne, etc.). You can either buy ready-made Quorn meals or just go for different forms of Quorn to make your own meals from scratch.

Nutritionally, Quorn is considered really healthy since it’s low in saturated fat, high in protein and a good source of fibre.

However, you should check the labels on ready-made Quorn meals to make sure you are happy with the overall nutritional profile. The Quorn brand aims for a nutritional profile that achieves green and amber on the UK ‘traffic light’ system but despite that, they still offer some ready-made meals which hit the “red” level. Avoid these if you can.

Read More:  Impossible and Beyond: How healthy are these meatless burgers?

You shouldn’t worry about the plain Quorn though as this is mostly made of mycoprotein, although it does have an addition of eggs (non-vegan range) to bind it all together, and some other ingredients. Quorn mince has a small amount of natural caramelised sugar in it but that’s not a problem as overall, it’s still very low in sugar (0.6g per 100g).

For those of you trying to follow a low-carb diet, Quorn does have carbs but it’s not high in carbs at all. The amount of carbs vary depending on the form of Quorn that you choose i.e. whether it’s in the form of mince, pieces, etc. 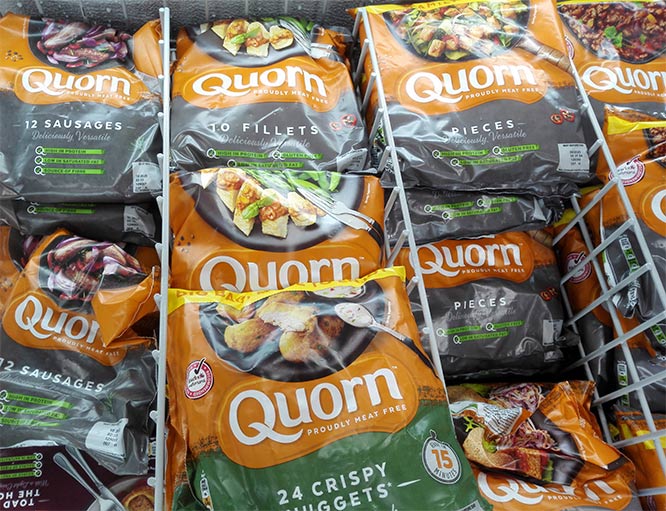 Although Quorn does not contain as much protein as meat, it still has good amounts. You will find around 14g of protein per 100g in plain Quorn (the exact amount depends on the form of Quorn). Quorn ‘chicken’ slices have slightly more protein (16.3g per 100g) while Quorn meals will normally have less protein since they are made with several other ingredients.

How healthy is Quorn?

Taking everything into account, you may wonder how healthy Quorn is and whether it’s good for you.

Looking at its nutritional profile, it certainly looks healthy with low saturated fat and it is a good source of fibre and protein. But is it really healthy? At the end of the day, it cannot be described as a very ‘natural’ product if it has to go through some serious processing.

There is no doubt that Quorn is highly processed and more natural foods are always better for your body than the processed ones.

But Quorn is an attractive meat substitute since it doesn’t come with the disadvantages that most processed foods have. So, it’s not high in calories and it won’t give you high cholesterol. However, if you don’t use only plain Quorn, you have to check the Quorn products or meals for the amount of salt they contain. Some will have higher amounts of salt than others. You need to make sure you don’t have too many of the Quorn products with the higher salt levels as this is certainly not good for your health. This is a particular concern if you already suffer from high blood pressure.

I’ve also found that some Quorn meals contain an excessive amount of saturated fat so you may want to skip those if you are keeping an eye on your cholesterol.

If you really want to eat Quorn and stay healthy, avoid Quorn meals and prepare your own meals at home using Quorn mince or pieces. However, I do like their sausages which I found quite tasty. Although they are a little bit high in fat (but not bad saturated fat), they are much healthier than real sausages.

Is Quorn healthier than meat?

In general, Quorn is considered to be healthier than some types of meats. There are several reasons for that. First of all, it doesn’t contain antibiotics and hormones which is something that the typical meat bought from a supermarket contains (non-organic meat).

Secondly, it’s low in saturated fat which is something that cannot be said for high-fat meats and meat products such as lamb, rib-eye steak, bacon and sausages. So if you compare Quorn to these high-fat meats, yes, it’s much healthier.

However, do keep in mind that Quorn is highly processed and it’s not classed as a natural product (as opposed to meat).

If you are a meat eater and think that by choosing Quorn once in a while, you will be much healthier, it’s probably better to take a different approach. Although it really doesn’t harm eating Quorn once in a while (like I do), going for natural, less processed products is really the way to go. The best you can do for your health, if you regularly eat meat and don’t want to become a vegetarian, is to buy organic meat and choose lean cuts whenever possible. When you eat leaner meats, you will consume less saturated fat and by eating organic, you will avoid antibiotics.

Read More:  How to Stay Healthy on Long Road Trips

Quorn is generally very safe but some people may experience an allergic reaction to it. Others will just have some discomfort after eating it, such as bloating or constipation so yes, Quorn can have some side effects but most people tolerate it quite well.

Allergic reactions to Quorn (mycoprotein) are very rare (research suggests that about 1 in 100,000 to 200,000 people will react to it) and Quorn foods are proven to be far less allergenic than shellfish, nuts, soy and dairy.

If Quorn causes you to experience some adverse reactions, it is best to avoid it. Keep in mind that some of the Quorn products contain allergens such as milk, gluten and wheat so do check the labels before buying.

Final Thoughts – Is Quorn healthy and should you eat it?

If you have read this article in full, I am sure by now that you have your own opinion about Quorn. The question as to whether it’s healthy or not really depends on what you compare it to. Remember, it’s a processed product so some people will not see it as being very healthy.

Whether you should eat it or not, is your personal choice. I will continue eating it occasionally but it’s not going to be my main source of protein. In my opinion, there is no harm in eating it infrequently as part of a balanced, healthy diet (as long as it doesn’t leave you with any unpleasant side effects). At the end of the day, it has an attractive nutritional profile which is something that I cannot ignore. The best idea going forward is to stick with plain Quorn products and keep in mind that some Quorn meals are not that healthy as they contain too much saturated fat or salt.

So this is my take on Quorn and whether it’s healthy or not. What are your thoughts?