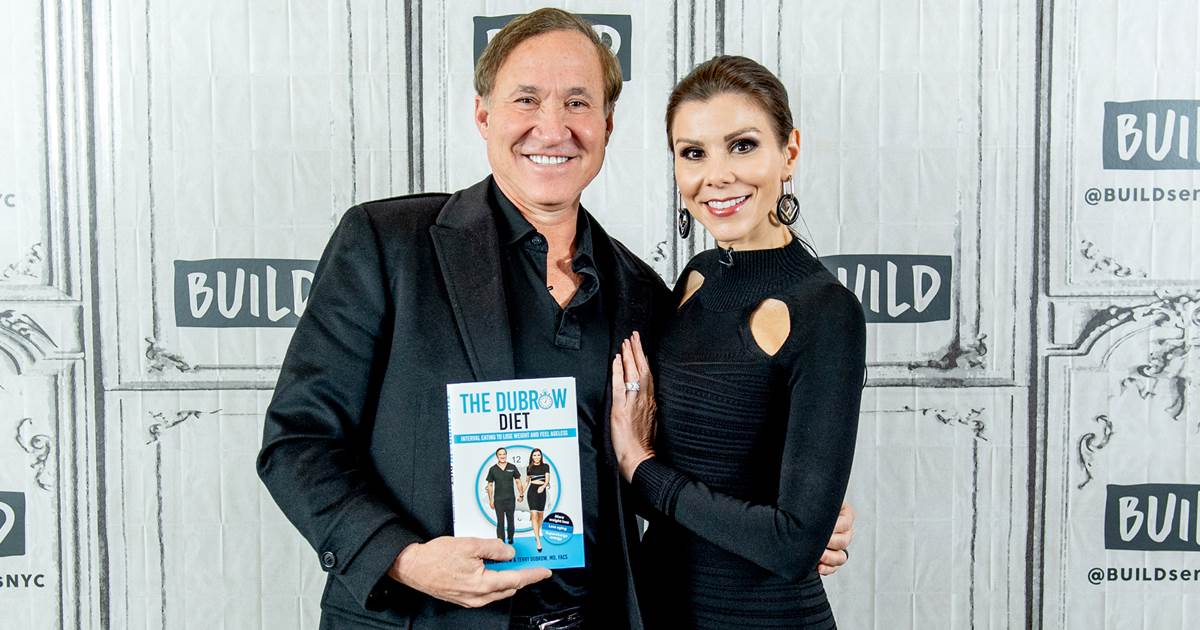 “This isn’t your typical diet book,” promises the “Dubrow Diet”, by Heather Dubrow and Terry Dubrow, MD, FACS. Heather Dubrow is a self-described champagne-and dessert-loving woman who appeared as a cast member of “The Real Housewives of Orange County”; her husband and co-author is Terry Dubrow, M.D., F.A.C.S., a plastic surgeon who appears on E’s “Botched” and “Botched by Nature”. After years of serial dieting, the couple say they put their best practices — along with Dr. Dubrow’s medical background — into the plan.

In essence, what you get is the plan that worked for them — an intermittent fasting program they term “interval eating”, which, they say, is a “metabolism-targeted plan” that’s designed to “burn fat” and “activate the anti-aging ability found in your cells.” Whether it will do all that has yet to be proven, though there is interesting research behind intermittent fasting (IF). Here’s a a breakdown of the Dubrow Diet, a quick review of IF, and some info to keep in mind if you want to give it a try.

Phase 2: Summer is Coming. You determine your IF eating schedule based on the weight loss results you’re looking for and the number of “cheats” you want per week. Options range from an 8-hour eating window (similar to phase one, but with a “cheat day”) to a 12-hour eating window.

Phase 3: Look Hot While Living Like a Human. This is the maintenance phase of the plan, which means that if you want the results to last, you’ll live in this phase for eternity. The recommended eating pattern is a 12-hour eating schedule for five days each week plus two days of more restrictive, 8-hour eating periods. The authors say that if they’re planning for an event, they jump back to Phase 1, presumably to drop a few pounds quickly.

Though there is research showing that IF can help with weight loss, most studies are short-term, involve a small number of participants (maybe 20 or so), or have been conducted in rodents. While this gives us a snapshot of IF’s potential, we still don’t know the long-term impact of this style of eating or what the optimal schedule might be. One review suggested that IF is no more helpful than weight loss achieved through reducing calories in a less restrictive fashion. The study also underscores the lack of research linking IF with improvements in health outcomes, such as memory loss, diabetes, heart disease, cancer, and stroke. That’s in stark contrast to the healthy and practical eating habits of a plan, like the Mediterranean diet, which promotes many benefits, one of them being weight loss.

Short-term studies and rodent research are interesting, but they don’t necessarily translate to the long-term human experience. For example, in one trial, people experienced a meaningful spike in their health-promoting HDL levels after 6 months of IF, but that benefit had disappeared by the 12-month mark, at which time unhealthy LDL levels had also climbed. Also, some studies have found higher dropout rates among fasters, suggesting it may be hard to follow for certain people or for prolonged periods of time—so any initial benefit is unlikely to stick.

What you’ll eat on the Dubrow Diet

Though the authors de-emphasize calories, they steer you towards certain portions and amounts of foods, such as two or three 3-to-4-ounce servings of protein and a couple of tablespoons of fat each day. You’ll also have up to ½ cup of whole grains, a serving of both fruit and non-fat dairy (in Phase 1), and you’re encouraged to eat a variety of mostly non-starchy veggies throughout. The later phases introduce extras, like alcohol (in moderation, which means a drink a day for women, two for men), so-called “cheats” (say, potato chips or a bagel or frozen yogurt), and more liberal portion sizes. The book comes with food lists, meal plans, and recipes to help you implement each phase.

Based on the meal plan advice, the calories are quite low in the first two Phases of the program — lower than most health experts would recommend, and lower than what you’d likely need to sustain energy levels and meet nutrient needs. Though I’m generally in favor of the types of foods suggested — especially all that produce! — the amount of these healthful foods is unnecessarily restrictive. What this means is that you may be unnecessarily hungry or irritable with distracting thoughts of food.

Another big red flag is all of the diet talk in this book. It’s as if it were written in the era of “you can never be too rich or too thin.” (It was published in late 2018.) There’s talk about keeping your diet a secret from your friends (even though we know support is a key component of meaningful lifestyle changes), cheat meals (or occasions), and even the diet phases emphasize your appearance over leading a full, energetic, and happy life. This type of talk isn’t just outdated — it’s harmful. Any plan that encourages you to be preoccupied with your appearance instead of all the benefits you gain from eating well (such as more energy, better sleep, better memory and focus, etc.) should be discouraged.

In fairness, there’s also discussion about the health benefits, but it’s so hard to overlook the antiquated references to your “before body” or the “threat of having to put on a bikini.” Back in the real world in 2019, we know that bodies come in all shapes and sizes, and that your happiness and self worth shouldn’t tied to a number on the scale or your appearance.

Unless you can permanently follow this eating pattern in a way that allows you to also enjoy your life, it’s not worth it. Most people would be unsatisfied with a day of eating that involves so little food, and these eating windows may not be practical for your work, home and social life.

If you’ve had a history of eating disorders or even just a tortured dieting past, steer clear of the Dubrow Diet. Not only is it way too restrictive — even by IF standards — the overemphasis on appearance is problematic.

Though I’m not sold on the Dubrow Diet for weight loss or getting healthy, one thing is for sure: Our bodies aren’t designed for the round-the-clock eating patterns we’ve adopted. While many IF dieters blow off breakfast, we’re optimized to handle food better earlier in the day — in accordance to our body’s natural rhythms — so this isn’t ideal. That said, shutting down the kitchen after dinner is definitely a healthy habit that can enable better digestion and sleep, and it also does double duty by minimizing unnecessary snacking that often occurs during that time.

WHAT A NUTRITIONIST WANTS YOU TO KNOW