A former ITV producer who suffered a severe allergic reaction after taking a single bite of nuts has finally gone home after five years in care.

Amy May Shead, 31 – who used to be a producer on This Morning – suffered an anaphylactic shock after eating just one mouthful of a chicken and rice dish that contained nuts in 2014.

Ms Shead, who was on a weekend away in Budapest at the time, went into cardiac arrest when two doses of her EpiPen failed to relieve her reaction.

By the time emergency services arrived, Ms Shead had been starved of oxygen for six minutes and was put into an induced coma to prevent further brain damage.

Ms Shead is now confined to a wheelchair, partially paralysed and unable to see or speak properly.

After having around-the-clock care at various hospitals and treatment centres, she has moved to a specially-adapted annex of her parents’ Roger and Sue’s home in Westcliff-on-Sea, Essex. 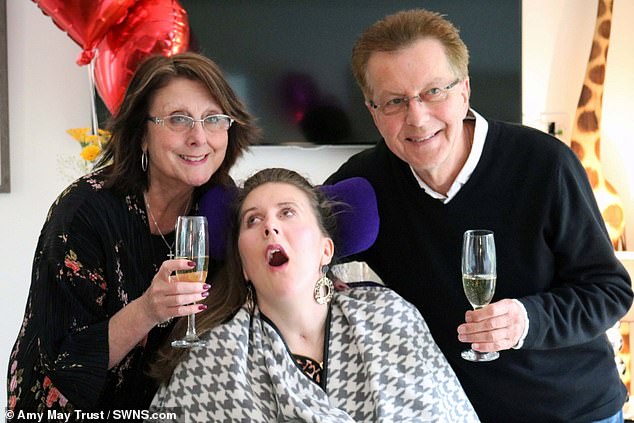 Amy May Shead – who was left brain damaged and partially paralysed after accidentally eating nuts – is finally home after five years in hospital. She has moved to a specially-adapted annex at the home of her parents Sue and Roger (pictured) in Westcliff-on-Sea, Essex 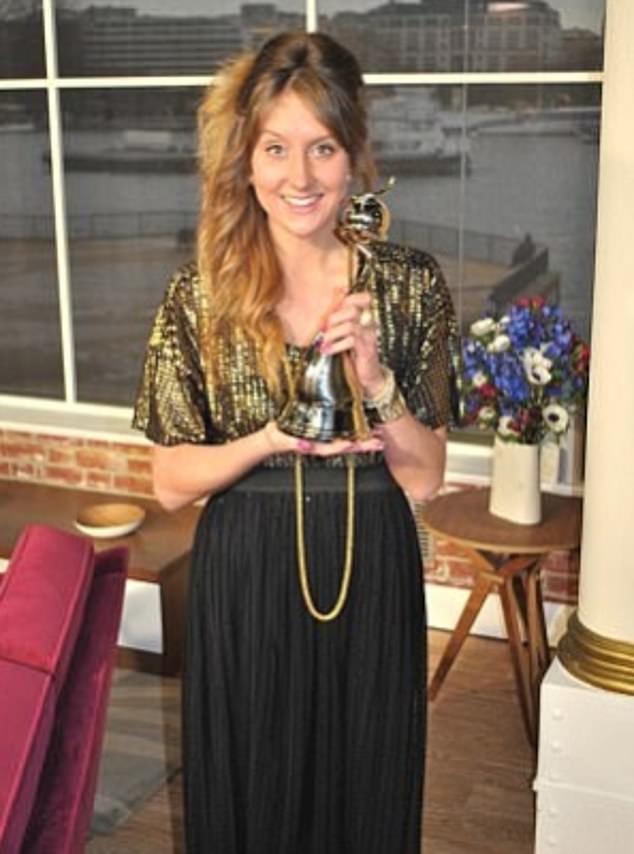 Pictured before the ordeal with a National Television Award, Ms Shead landed her dream job as a producer of This Morning. But during a girls’ weekend away in Budapest in April 2014, she went into anaphylactic shock after just a single mouthful of a chicken and rice dish with nuts

Read More:  Fear of HIV disclosure and lack of referrals means that the pain of many Black women with HIV is unaddressed 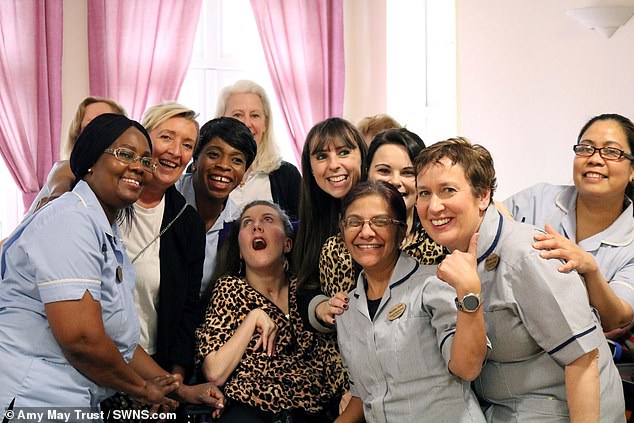 For the past three years, Ms Shead has lived at the Marillac Care centre in Brentwood, Essex. She is pictured with the staff during her send off. She also spent two years in London hospitals

After going into cardiac arrest, paramedics fought hard to save Ms Shead’s life on the road outside the Budapest restaurant.

She was then rushed to the Peterfy Hospital in the Hungarian capital and immediately put into an induced coma.

Ms Shead spent three weeks in intensive care, where she battled seizures and pneumonia, before flying to St Thomas’ Hospital in London via air ambulance.

WHAT IS AN ANAPHYLACTIC SHOCK?

Anaphylaxis, also known as anaphylactic shock, can kill within minutes.

It is a severe and potentially life-threatening reaction to a trigger, such as an allergy.

The reaction can often be triggered by certain foods, including peanuts and shellfish.

However, some medicines, bee stings, and even latex used in condoms can also cause the life-threatening reaction.

According to the NHS, it occurs when the immune system overreacts to a trigger. It is considered a medical emergency and requires immediate treatment.

For the past three years, Ms Shead has lived at the Marillac Care centre in Brentwood, Essex.

Prior to this, she also spent a year at Putney Neurological Hospital.

Her mother Sue Shead said it was ‘lovely to have her home’.

But she added the family are still ‘devastated’ by the reaction, which nearly killed Amy, who was the most ‘vivacious, outgoing, bubbly young lady’.

Read More:  Biden keeps up attacks against 'Medicare for all'

‘Everyday is hard to get through,’ Sue said. ‘But we’d do anything for her.’

Ms Shead managed her nut allergy throughout school and at Canterbury Christchurch University, where she studied film, media, radio and television.

She went on to do an MA in broadcast journalism at Westminster University.

Throughout her life, Ms Shead always carried medication and an allergy card with her.

While in Budapest, she showed her card to restaurant staff three times and was assured the meal did not contain nuts. 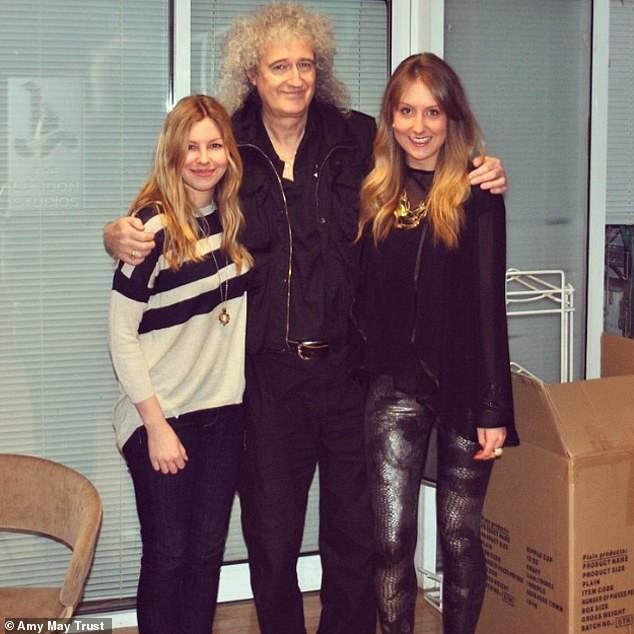 Pictured right before the ordeal with Queen’s Brian May – who she met through work – Ms Shead was the most ‘vivacious, outgoing, bubbly young lady’, according to her mother 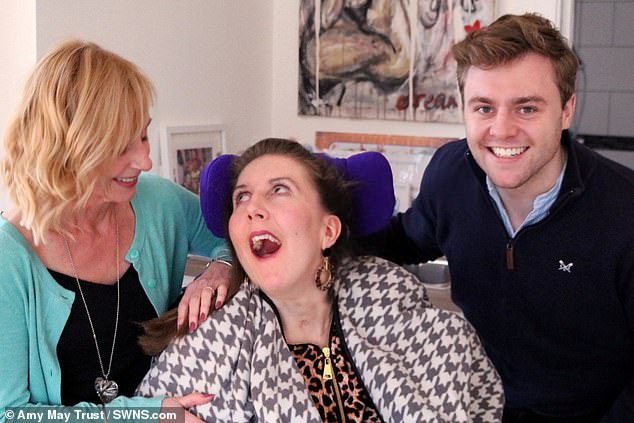 She is pictured with her aunt Julie Martin and cousin Tom Martin at the Marillac Care centre. The pair set up the Amy May Trust, which shares updates on her journey and campaigns for public awareness on the seriousness of nut allergies, including on airlines 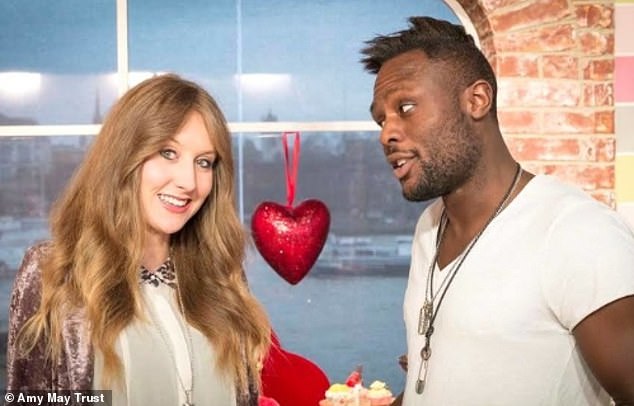 Pictured before, Ms Shead managed her nut allergy throughout her life with medication and cards that explained her condition in different languages. This card was shown to the restaurant staff three times, with them assuring her the meal she ordered was safe

Ms Shead and her family have set up a website – the Amy May Trust – which shares updates on her journey and campaigns for public awareness on the seriousness of nut allergies.

In an update about her returning home, the site reads: ‘Almost five years from when tragedy struck, Amy has now come home.

‘Amy was given a wonderful send-off from the Marillac Care facility where she has lived for the past three years, to start a whole new chapter to live with her devoted parents, Sue and Roger.

‘Amy has lived full time in three venues since 2014, St Thomas’ Hospital, Putney Neurological Hospital and Marillac Care, the staff from each treating Amy with great compassion, care and love and we thank the staff of all three of these facilities for their kindness – shown not only to her but also to her family and friends.

‘However, as we all know, there is no place like home or the strength of family ties, and absolutely nothing which compares to the love of a parent. 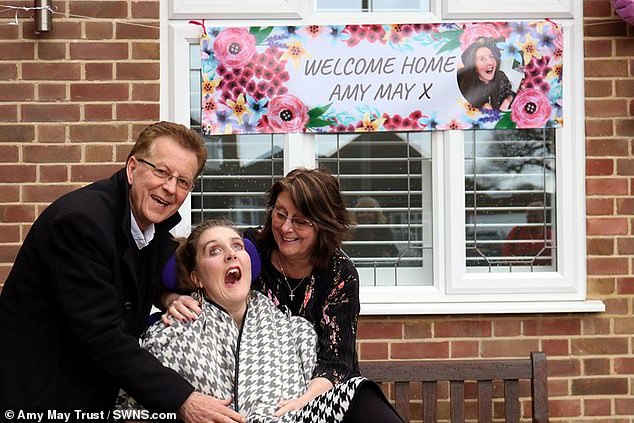 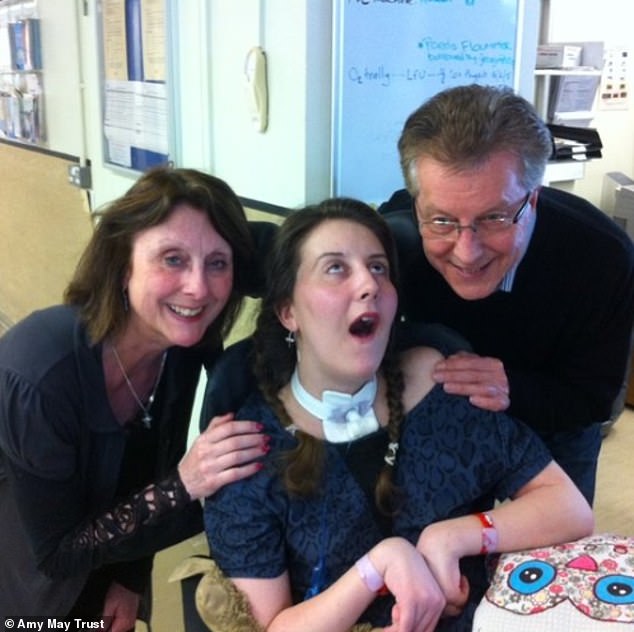 Speaking today, Ms Shead’s aunt Julie Martin – who set up the Amy May Trust with her son Tom Martin – said her niece was ‘happy to be home’.

‘It’s a happy time because her parents’ longed for wish was to have Amy back home with them after five years in the care system.

‘It’s been a long five years for the family.

‘It’s a tragedy that shouldn’t have happened because the restaurant in Budapest where it occurred was negligent.’

The trust is urging people to sign a petition calling for airlines to improve the safety of travel for nut allergy sufferers.