15-year-old Mark Hanley was crowned the winner of the Liffey Swim today while fellow Meath person Sinead Delaney was the fastest woman during the event.

Hanley, of North Dublin Swimming Club, finished the 2.2km course from Walting Bridge to North Wall Quay in a time of 10 minutes. Billy Keogh (61) of Sandycove Swimming Club came second with a time of seven minutes.

Swimmers are given a time handicap depending on their level of proficiency.

Meath woman Delaney, of Phoenix Swimming Club, came out on top after defeating hundreds of other swimmers.

The event, now in its 100th year, was in significant danger of not happening in the first place after serious concerns over the quality of water in the river.

Samples were taken earlier in the week. However, the results were made available yesterday and a spokesperson from Dublin City Council revealed the extent of the situation. 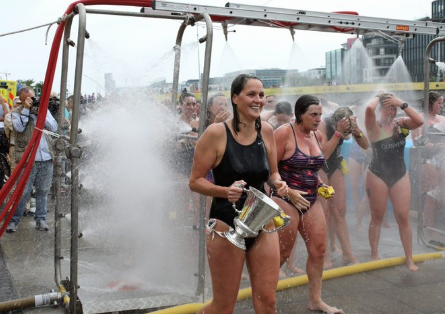 Sinead Delaney with her trophy for winning the Women’s race

“Water samples of the River Liffey were taken on 31 July and 1 August 2019 and the results became available today, Friday 2 August at 1.30pm.

“The results are exceptionally poor, and significantly exceed the maximum permitted levels for designated bathing waters.”

“Irish Water was also made aware yesterday evening 1 August, of an overflow or discharge of sewage from the Irish Water sewer network in the area of Knockmaroon.

“This discharge may have been active for some days before being rectified. We were advised at 12.30 pm today, 2nd August by Irish Water that the matter is now resolved and the discharge has ceased. Notices have been placed at the designated bathing water locations.

“Due to the fact that the annual Liffey Swim is scheduled to take place tomorrow Saturday 3 August, Dublin City Council has notified the HSE and the event organisers of these sample results.

“Unfortunately, it is not possible to get any more up to date samples taken and tested in advance of the event. The river Liffey is not a designated bathing water location.”