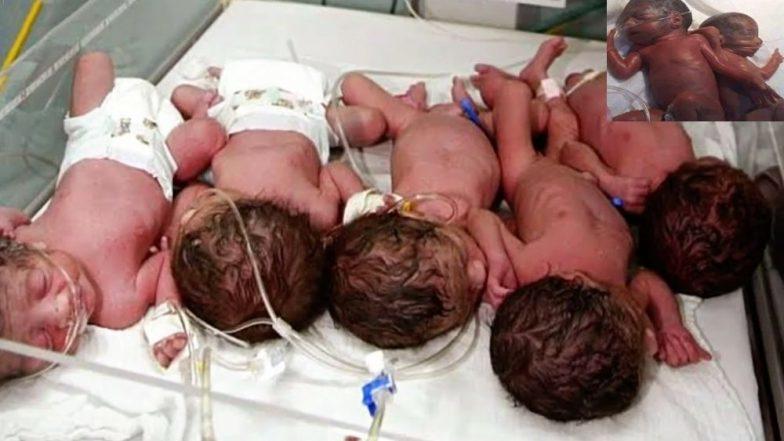 In an incredible case of natural birthing, a 25-year-old mother has given birth to a set SEPTUPLETS. According to reports the babies are in perfect condition and are doing well health-wise. The case is said to the first septuplet birth in Iraq at a hospital in the Diyali Province. Firas Al Izzawi who is claimed to be the spokesman for the local health department, said in a statement that the unnamed 25-year-old mum had a natural birth and was perfectly healthy after the procedure, as per The Sun. The set of septuplet consists of six girls and one boy. Both the babies and the mother are reportedly in good health and images of the little babies lying together in bed is already going viral. Scientific Marvel: Mother Gives Birth to Healthy Baby Via Uterus Transplanted from ‘Dead Donor.’

Here’s a video showing the SEPTUPLETS:

This is not the first surviving septuplets in the world. Infact, in November 1997, the McCaughey septuplets were born, are septuplets. Kenny and Bobbi McCaughey in Des Moines, Iowa, United States had the first set of healthy seven offspring, making them the world’s parents of a set of surviving septuplets. Bobbi and Kenny McCaughey had a daughter named Mikayla Marie already in 1996. However, under treatment with ovulation-stimulating Metrodin for infertility Bobbi became pregnant with seven babies by the hands of obstetricians Karen Drake and Paula Mahone. They gave birth to a septuplet of four boys and three girls, and they were said to have been born prematurely of nine weeks prematurely in Des Moines. Born by Caesarean section, they were born within six minutes.

Take a look at the McCaughey Septuplets all grown up:

Saint George University Hospital in Lebanon, last year saw a mother give birth to sextuplets out of which were three girls and three boys.