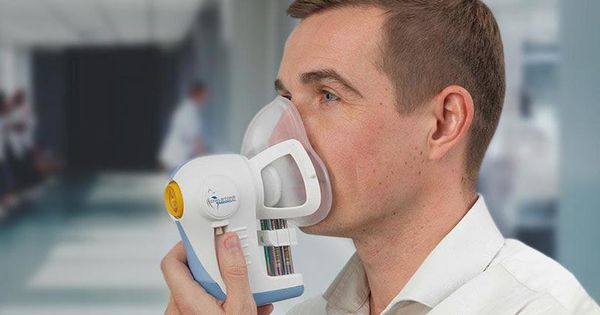 A new breath test for cancer is being evaluated in a clinical trial involving 1,500 people.Owlstone Medical Ltd

Nowadays ‘liquid biopsies,’ the notion of detecting cancer using only a blood test to detect minute amounts of circulating tumor are fairly well-known. But what if not even a blood test was needed to detect cancer, merely a few lungfuls of air?

A new clinical trial in the U.K. is aiming to find out whether this might indeed be possible.

Breath tests for cancer work by detecting tiny amounts of volatile organic compounds (VOCs) such as aldehydes and ketones, produced by cells and found in exhaled breath. Normal cells produce a range of VOCs, but it is thought that if their metabolism is changed, for example when they become cancerous, they will release different patterns and/or amounts of these chemicals. This information is then used to ascertain whether there is a particular metabolic ‘signature’ indicative of cancer.

This is not an entirely new concept, with results from breath tests for several cancer types already published, including lung cancer, prostate cancer, esophageal and even colon cancer. But a new trial run in the U.K. hopes to be able to detect multiple different types of cancer with just one diagnostic test, which its developers claim could save thousands of lives and make considerable savings on the current cost of diagnostics for cancer.

“We urgently need to develop new tools, like this breath test, which could help to detect and diagnose cancer earlier, giving patients the best chance of surviving their disease,” said Professor Rebecca Fitzgerald, lead investigator of the clinical trial at the Cancer Research UK Cambridge Centre.

The cancer breath test takes 10 minutes and is completely non-invasive and painless, a clear advantage over traditional surgical biopsies. The researchers hope such a test if proven effective may even in the future be able to be administered by family physicians.

The clinical trial, a collaboration between charity Cancer Research UK and British company Owlstone Medical will collect samples from 1,500 people including those with suspected cancers and also healthy people as controls. Initially, the team will recruit people with suspected stomach and esophageal cancers, before expanding the trial to those with suspected prostate, kidney, liver, bladder and pancreatic cancer to further evaluate their ‘Breath Biopsy®’  test. They aim to see whether the metabolic signatures from different cancer types are similar or different and how early the test can pick up any abnormal signatures.

“Through this clinical trial we hope to find signatures in breath needed to detect cancers earlier – it’s the crucial next step in developing this technology. Owlstone Medical’s Breath Biopsy® technology is the first to test across multiple cancer types, potentially paving the way for a universal breath test,” said Fitzgerald.

There is particular excitement about the prospect of breath tests for early diagnosis of diseases such as esophageal cancer, which has a poor 20% five-year survival rate and is often diagnosed at later stages of the disease, making it difficult to effectively treat.

“There is increasing potential for breath-based tests to aid diagnosis, sitting alongside blood and urine tests in an effort to help doctors detect and treat disease. The concept of providing a whole-body snapshot in a completely non-invasive way is very powerful and could reduce harm by sparing patients from more invasive tests that they don’t need,” said Billy Boyle, co-founder and CEO at Owlstone Medical.

There are several competing technologies currently running trials to detect cancer using VCOs from breath samples, but the Owlstone medical test appears to be the only one currently being tested for multiple, distinct cancer types.

The partnership with Cancer Research UK, the world’s largest charitable funder of cancer research and substantial number of patients they expect to enroll in the current trial will give Owlstone Medical a significant boost in being able to evaluate the efficacy and reliability of the ‘Breath Biopsy®’ in a large number of patients.

Although this particular trial is only just beginning and time will tell whether Owlstone Medical’s mission to ‘Save 100,00 lives and $ 1.5billion in healthcare costs‘ will be achievable, the company has a good track record with similar uses of their technology, so there is reason to be hopeful that their ambitious predictions may come to fruition.