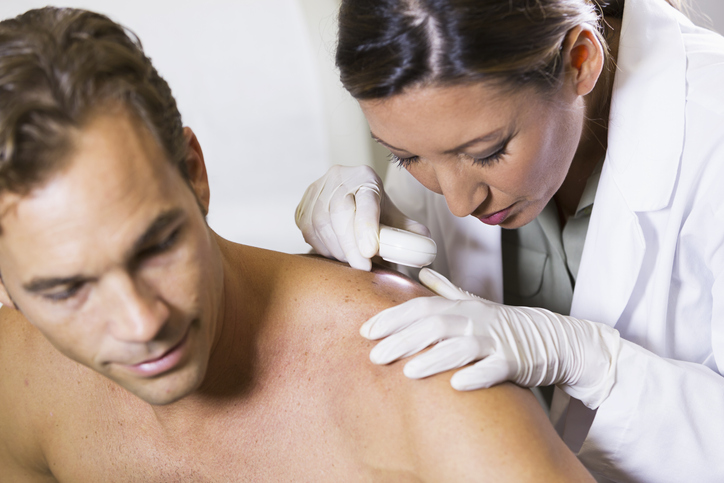 Cutaneous melanoma, also called malignant melanoma, is the type of skin cancer that is most likely to spread to other parts of the body. Though melanoma accounts for only about 1% of skin cancers, it is responsible for more than 90% of skin cancer-related deaths.

But thanks to developments in skin cancer treatment (mostly in the last decade), patients with melanoma have much better chances of living longer.

What is a melanoma?

Melanoma involves the uncontrolled growth of a type of cell known as a melanocyte. One of the most important functions of a normal melanocyte is to protect your skin from the sun’s damaging ultraviolet (UV) rays. It does this by producing melanin pigment. (Though we usually refer to melanoma of the skin, melanomas can also develop from melanocytes in other parts of the body, such as the retina or gastrointestinal tract.)

There are many factors that may result in the development of melanomas. These include environmental factors such as sun damage or use of tanning beds; immune suppression; genetic causes, such as inheritance of a gene that makes you more susceptible to melanomas; and spontaneous gene mutations.

Treatment options: The old and the new

Until several years ago, treatment options for people with advanced metastatic disease (melanoma that has spread to other parts of the body) were quite limited. Surgical removal of the cancer, chemotherapy, and less targeted immunotherapy and interferon therapy (to reduce tumor proliferation) were possible treatment options. But only about one in 10 patients with advanced metastatic disease survived for five years, and median survival was less than one year.

Thanks to significant developments in genetic research, including findings from the Human Genome Project, patients with widespread disease now have a much better chance of survival. For example, research showing that some melanomas have mutations that abnormally activate certain signaling pathways, which contribute to uncontrolled tumor growth, has led to advances in targeted immunotherapy.

Another potential therapy receiving more attention now includes cancer vaccines. In addition, some companies have introduced enhanced testing of biopsy samples, which may allow for more accurate assessment of a person’s risk of the cancer spreading and recurring, which in turn can influence treatment decisions. Many more possibilities are also on the horizon.

Prevention still worth more than the cure

Although there are now more effective therapies available to treat melanoma, advanced melanoma still carries a poor prognosis. And even the newer therapies come with significant side effects, including the risk of developing other types of skin cancers such as squamous cell carcinoma and basal cell carcinoma. Therefore, it is paramount to protect ourselves from getting melanoma in the first place.

Simple healthy behaviors can help. These include routinely wearing (and re-applying) sunscreen, avoiding the sun during hours of peak sunlight (around 10 am to 2 pm), and making sure your doctor conducts routine skin checks.

It’s also important to know your own skin. Examine your own skin every month or so, and have a partner examine the areas of skin you can’t see. Look out for the “ugly duckling” (a mole that looks different from the others). The so-called ABCDEs of melanoma have their limitations (they don’t catch all melanomas), but can also help when conducting skin checks on yourself or a loved one. That means being on the lookout for

A: Asymmetry (one side looks different from another)
B: irregular Borders
C: Color differences
D: Diameter (often greater than 6 millimeters)
E: Evolution (a mole that appears to be changing over time).

If you notice anything unusual, seek advice from your doctor. In general, the earlier you catch a skin cancer, the better your prognosis.