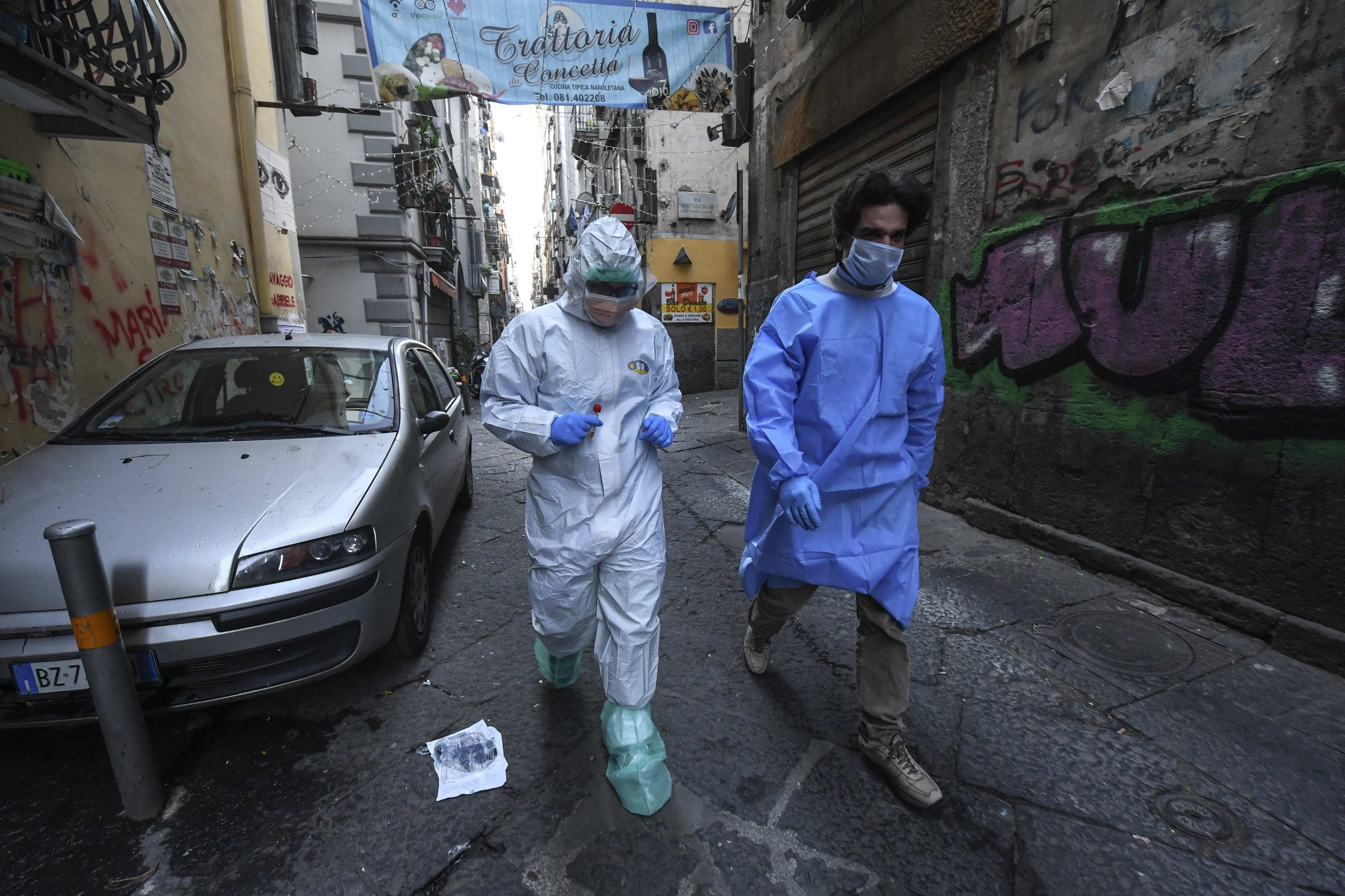 Two doctors, protected by overalls, masks, gloves and glasses, walk through the streets of the Spanish Quarters and collect the swabs made to some inhabitants of the neighborhood, to check for any contagions from Coronavirus (COVID-19). For the collection of the swabs they also use a mobile sanitary unit.

Italians in the south of the country are bracing themselves for the coronavirus outbreak that has crippled northern Italy, with those living in the poorer southern regions telling CNBC that people are scared, angry and desperate for more government help.

Italy is at the epicenter of Europe’s coronavirus outbreak with its entire 60 million population under lockdown and  having to stay indoors. Fines are meted out to anyone that leaves the house without a valid reason such as to buy food or fetch medicine, or if they have to work and can’t do so from home.

So far, the most acute outbreak of the virus has been experienced by the wealthy region of Lombardy where Italy’s financial hub Milan is located. The virus was first detected around mid-February but as of Monday, Lombardy had just over 25,000 cases and hospitals have been pushed to breaking point.

But the virus has been spreading to the south and there are widespread concerns among residents and politicians alike over how the southern regions — which are largely poorer, less developed and less medically equipped to withstand the economic and health impact of the coronavirus — will cope.

“People are very scared,” Rachele, a mother of two young children who lives in Salerno in Campania, told CNBC Monday.

“In the south, the virus is spreading quickly and we’re having a lot of deaths, we’re hoping that this situation ends soon,” she said. “The situation is horrible here, we’re still closed up in our house, you can’t go out.”

Rachele, like Italy’s other 60 million or so inhabitants, is living under a national lockdown imposed by the government. Now, Italy’s number of infections has surpassed China, where the coronavirus was first discovered, and is second only to the U.S. where cases have recently soared.

As of Monday, Italy has recorded 101,739 confirmed coronavirus cases and 11,591 deaths and the rate of infections is growing fast in the south.

Read More:  A gut bacteria toxin that damages DNA may be involved in bowel cancer

People lined up at the supermarket along the street for grocery shopping, wearing masks for fear of Coronavirus infection (COVID-19).

The spread of the virus is putting more pressure on the south where the economy is far weaker and where unemployment rates are much higher than in the north, and indeed, most of Europe.

Campania (the region below Lazio where Rome is located), Calabria and Sicily have the highest unemployment rates in the country, with around 20% of their adult populations without a job, and for those aged 16-24 the situation is far worse with youth unemployment hovering around 50%, according to EU data, which acknowledges that these figures are among the highest in the continent.

The fragile economies of these regions have prompted many people to resort to doing undeclared, clandestine work or “lavoro nero” (black work) as it’s called in Italy. This work is easy to pick up and easy to lose, and those people have slipped through the social security net.

“Aside from people that work and those that have contracts and can receive a salary, there are a lot of people that are involved in illegal work in the south. The people that do that work, even if it’s a little morally wrong, can now no longer even earn enough to buy food. And so soup kitchens are full to the brim,” she said.

No help from Rome?

There have been signs of desperation and tensions brewing among the poorer members of the Italian population, with reports of thefts from supermarkets in Sicily.

The government announced Saturday that it has designated 400 million euros ($ 441 million) to supply food vouchers. Prime Minister Giuseppe Conte said that another 4.3 billion euros would immediately be made available to regional mayors to help their citizens.

People watch tv as Italian Prime Minister Giuseppe Conte holds his speech on the new economic measures due to Coronavirus emergency on March 14, 2020 in Rome, Italy.

Government help is a moot point for many southerners, who feel that the north has reaped the benefits of more government investment, infrastructure and opportunities.

When the coronavirus first appeared in a number of towns in Lombardy, and a lockdown imposed and extended on March 9, the governors of southern regions pleaded with southerners who had gone up north for work not to return home, bringing the virus with them.

“I speak to you as if you were my children, my brothers, my nephews and nieces: Stop and go back,” Michele Emiliano, Puglia’s president, appealed on Facebook at the time: “Get off at the first train station, do not catch planes for Bari and Brindisi, turn back in your cars, get off your buses at the next stop. Do not bring the epidemic that has hit Lombardy, Veneto and Emilia-Romagna to your Puglia.”

Whether those appeals were heeded or not is uncertain although there were reports of packed trains heading south from the north as people tried to escape the quarantine. Now, southern leaders are pleading with Rome for more help to tackle the effects of the coronavirus.

Vincenzo de Luca, governor of the southern region of Campania, wrote to the national government warning that the outbreak in the south was “about to explode in a dramatic way” and that “there is the real possibility that there will be a tragedy in the south” as he appealed for medical equipment, ventilators and face masks.

A woman wearing antivirus masks, to protect herself from the Coronavirus (Covid 19) walks at sunset on the Naples waterfront in front of the Vesuvius volcano.

Marco, a keen traveler and proud Neapolitan, told CNBC that he believes the traditional north-south divide in Italy could widen because of the outbreak and said that southerners had been largely relying on themselves to get through the crisis, rather than on the state.

“It is clear that the problem is serious and there is a real risk of a civil war precisely because there is more economic poverty in the south, but not because of southern people but because politicians think only of the north,” he told CNBC Monday. “When you make people run out of food, you really risk a civil war. With all my heart I hope to never see such a thing,” he said.

Marco felt that the south was responding well to the crisis, with citizens showing charity and kindness toward each other. In Naples, he said, the wealthiest families are helping the most needy.

On the contrary, state aid has been slow to arrive, he said. “Prime Minister Conte said that shortly there will be aid for all Italian municipalities, even for food, but to date that we are still in almost a month of quarantine and there’s still nothing. And we are organizing ourselves independently.”

Not everyone is worried about the current state of affairs. There are glimmers of hope that the rate of new infections is slowing in northern Italy, that the country might see the peak of the outbreak in a matter of days and the number of infections could start to decline steadily.

Marcello, who lives in Palermo in Sicily, lamented the fact that his young daughter cannot play outside, and that no one can leave home after 7 p.m., but he played down reports of food shortages.

“There is no shortage of food, and indeed you can eat very well still,” he told CNBC Monday.  “As regards poverty, the Italian state is starting to give benefits (money) to people who have lost their jobs, yes there have been people who have attempted to do the shopping without money as they have children to feed, but the situation has gone back to normal.”

A general view of a almost deserted street during coronavirus crisis on March 20, 2020 in Palermo, Italy.

For others, and especially the younger generation of Italians like Marco, there is a yearning for life to return to normal and for the lockdown to be lifted, although the government has already extended the current restrictions to at least April 12, Easter.

“Staying at home is hard … especially for people like me who are always traveling and traveling around the world. Freedom is everything for me. I too want to go on a trip or have a beer with friends. But for now, this is forbidden, and we make this sacrifice to stay at home,” Marco said.

“This is not so bad because you can do many things, cultivate many hobbies, rest and rediscover things you forgot. But nevertheless, I hope that we will soon return to some true freedom and normal life.”