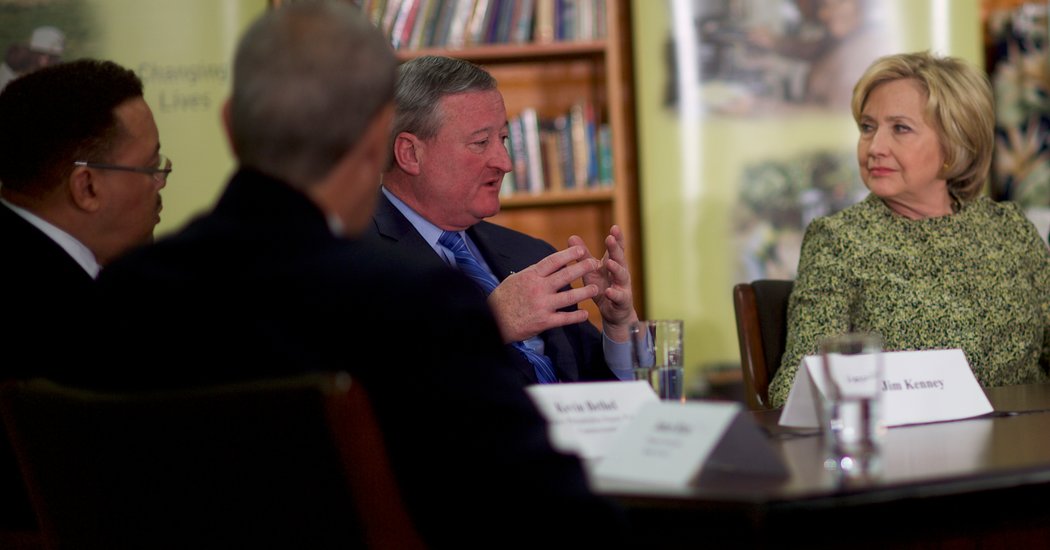 Hillary Clinton and Bernie Sanders have a new issue to disagree about: the wisdom of a soda tax.

A tax on sugary soft drinks, like the one proposed in Philadelphia and endorsed by Mrs. Clinton last week, divides the left. It can be seen as achieving an admirable public health goal of less sugar consumption or as a very regressive tax that falls more on the poor than the rich, since the poor tend to drink more soda.

While not the biggest issue the two candidates have tussled over, it is one that may reverberate across the country in coming years as more cities and states use the tax to raise revenue or improve citizens’ health.

Last week, Mrs. Clinton became the first presidential candidate to explicitly endorse a tax on sugary drinks. At a Philadelphia event Wednesday, she said a proposal there to use a soda tax to fund universal prekindergarten was a good idea.

“It starts early with working with families, working with kids, building up community resources,” Mrs. Clinton said, according to a CNN report. “I’m very supportive of the mayor’s proposal to tax soda to get universal preschool for kids. I mean, we need universal preschool. And if that’s a way to do it, that’s how we should do it.”

Mrs. Clinton’s framing of the issue as she campaigns in the Pennsylvania primary echoes that of Mayor Jim Kenney of Philadelphia, who has emphasized the soda tax as a way of funding education. Mr. Kenney talks about the tax not as a way to drive down soda drinking, but as one to help fight poverty in his city. In truth, it would probably do some of both. Higher soda prices, the likely result of such a tax, would discourage people from buying as much soda. Public health reformers think such a function of the tax is desirable, since soda consumption has been linked to obesity, diabetes and tooth decay.

But there’s another way to view soda taxes: as measures that hit the poor harder. Lower-income Philadelphians, like other lower-income Americans, tend to drink more soda than their richer neighbors. That means that they may get stuck paying a disproportionate share of the bill.

“Making sure that every family has high-quality, affordable preschool and child care is a vision that I strongly share,” Mr. Sanders said, in a written statement. “On the other hand, I do not support paying for this proposal through a regressive tax on soda that will significantly increase taxes on low-income and middle-class Americans. At a time of massive income and wealth inequality, it should be the people on top who see an increase in their taxes, not low-income and working people.” Over the weekend, Mr. Sanders continued to express opposition to the tax, at campaign events and on Meet the Press.

The proposed Philadelphia tax would be 3 cents for every ounce of sugary drink sold by distributors, making it the highest soda tax proposed anywhere in the country. That means a tax of $ 4.32 on a 12-pack of soda, which typically costs between $ 3 and $ 6 at the grocery store. It would come to 60 cents of tax on a 20-ounce bottle, which usually retails for about $ 2. It’s not yet clear whether distributors will absorb some of that tax or simply pass all of it on to consumers, but the city budget department expects big price increases in retail stores.

Mr. Sanders also says Mrs. Clinton’s support violates her pledge not to raise taxes on those earning less than $ 250,000.

Mr. Sanders’s argument is in line with that of many soda tax opponents. And there’s most likely some truth to it. Tobacco taxes, in many ways the model for soda taxes, have tended to fall largely on low-income people, who remain more likely to smoke.

But tobacco is highly addictive. In Mexico, where a big, national soda tax went into effect in 2014, soda drinking declined the fastest among the poor, who felt the tax’s effects in their budgets most acutely. Consumption among the poorest Mexicans fell by 17 percent by the end of the year, compared with 12 percent in the population nationwide. As Barry Popkin, a professor of nutrition at the University of North Carolina puts it: The rich paid the tax, and the poor reduced their soda drinking. If something like that happens in Philadelphia, the poor may suffer in the form of less choice or enjoyment, but they may not bear the brunt of funding city preschool.

Republicans appear to be nearly united in their opposition to the measure, both as a tax increase and a “nanny state” intrusion on personal choice. Several prominent Republicans cheered Mr. Sanders’s anti-tax stance, including Grover Norquist, the president of Americans for Tax Reform, and an influential anti-tax advocate. But conservative opposition to soda taxes is not true world over. In Britain, the Conservative government just proposed a hefty soda tax, which is expected to become law.

A version of this article appears in print on , on Page A3 of the New York edition with the headline: Clinton and Sanders at Odds on Whether to Tax Soda. Order Reprints | Today’s Paper | Subscribe