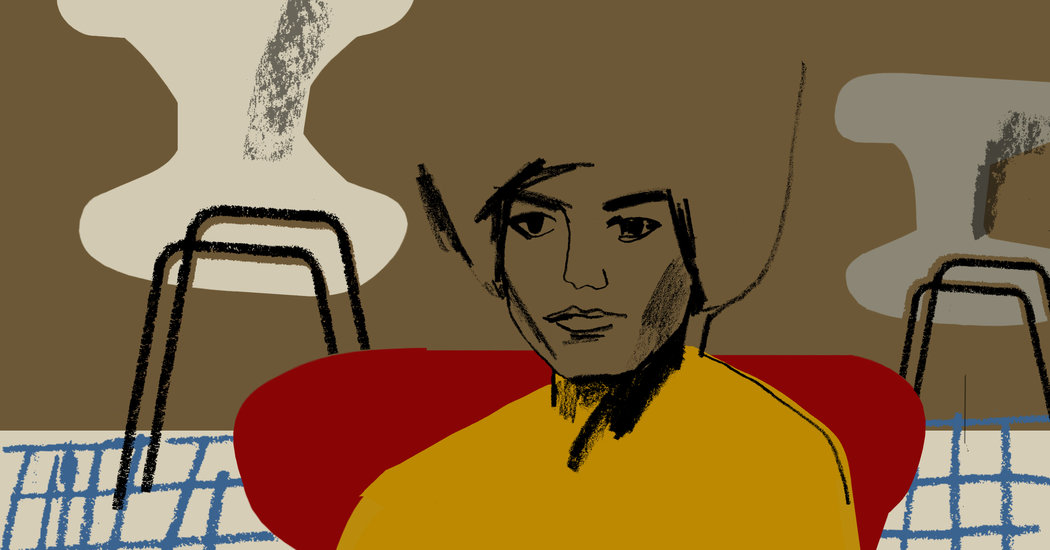 I gaped at my daughter one morning a few years ago as she tried to creep, unnoticed, out the front door to her bus stop. She was 13 at the time. Her hair, normally gelled and pulled tightly into a top bun, now sprang loose in a frizzy, light brown Afro. Large gold hoop earrings hugged the sides of her copper-colored face, above her camo-patterned crop top.

“You look like …” I paused while my brain did the equivalent of a Google image search. An iconic shot of a 1960s Black Panther Party activist clicked into my brain.

“Angela Davis,” I said, conclusively. My daughter arched her eyebrows in confusion. Then she gave me that annoyed look I’d become accustomed to during her middle school years. It said, “Who are you?”

I had the same question.

“What’s with the black power look?” I asked, half-jokingly.

At the time, the remark stung. From the time they were born, my husband and I had always prided ourselves on making sure both our adopted daughters were immersed in black culture. We lived in diverse neighborhoods, surrounded ourselves with friends of different races and ethnicities and went out of our way to ensure they had people in their lives who looked just like them. But I sensed my youngest daughter was uncomfortable in her skin. The world didn’t automatically see her as African-American, like her older sister. She was born mixed race. And her skin tone, features and hair texture led kids to ask if she was Latina, Middle Eastern or Asian. The uncertainty about the race of her birth father left her without a complete answer.

I understood her frustration at not knowing. I too had grown up in an undetermined category. I wasn’t adopted into a family that looked different from me. I was born into one. My mom, who was black, had four children with her black husband before separating. Then she had a fleeting relationship with a man who left before I was born. Though my mother was too ashamed to admit it, when I looked in the mirror at my very fair skin, greenish eyes and non-kinky hair, I guessed the truth. He was white. I was born in 1966 and back then, interracial relationships were illegal in some parts of the country. They were frowned upon almost everywhere else. It set me up for a lifetime of trying to figure out where I belonged.

I looked like one thing while my family and people in my small town told me I was something else.

I wanted to tell my daughter how for a few terrible years, I sneaked into the bathroom with my brother’s hair pick, the one with a handle carved to resemble a black power fist. I tried to lift the few brown curls on my head into something that looked like the carefully coifed hairstyles that all my brothers wore. I wore the limp helmet of hair to school until the kids laughed and called me half-breed. From then on, I slicked down my hair with hair oil until I could carve a part in it. Even at home, I couldn’t seem to find my place. When James Brown came on “Soul Train” and wailed through our black and white TV to say it loud, I hollered back, “I’m black and I’m proud.” But even after my brothers and sister clapped and shouted for me, I felt like I was pretending.

As I grew older, that confusion about being one thing or another wasn’t resolved. It just became ambivalence. I crossed back and forth over the color line on standardized tests, job applications, census forms and among friends, sometimes identifying as white, sometimes black and often as something in the middle.

But now my daughter seemed to be challenging that notion that there was a safety in the in-between. As that fall progressed, I noticed the sounds of Drake seeping out from her earbuds. He’d taken the place of Taylor Swift as her favorite artist. One night I knocked at the door to check her homework. Instead I found her studying a book she’d been clutching like a bible under her arm for weeks. I read aloud the title: “The Hate U Give.” For the next half-hour, her head bobbed and her brightly colored nails wagged in my face as she told me the novel’s account of a mixed-race girl caught between a white world at school and her black family at home.

It was hard for both my children. Though we live in a progressive community, I sensed how these two young black girls must sometimes feel out of place being raised by gay dads who didn’t look like them. It was harder still that we had decided to raise them as Jewish, my husband’s faith.

It had taken me a lifetime to understand there’s room in the uncomfortable middle for me, and for my daughters. They don’t have to declare a single identity, like a college major. Yet I also recognize that we don’t really live in a post-racial promised land. We self-identify and segregate ourselves into tribal camps, based on whether we’re black, white or brown or if our politics are red or blue.

It happens in the workplace, in our social lives, on the sidelines of our kids’ soccer games and even the school lunchroom. I discovered that fact the day I visited my daughter’s middle school in the Maryland suburbs near D.C. As I looked out, I could see roughly a third of the kids at the lunch tables were white and another third black. Hispanic and Asian kids made up the last third. But each individual table wasn’t filled with a rainbow of kids. Instead the lunchroom looked like a color spectrum, with the room slowly changing shades as you glanced from one side to the next.

That night I quizzed my daughter and learned that the diversity within the school’s population didn’t mean there was always inclusion. “Wait. You’re telling me the Ethiopian kids don’t sit with the black kids? Do the Latino kids who are new immigrants break up by country?”

My daughter gave me a patient look and began to “spill the tea” on middle school lunchroom etiquette. There was even a detailed explanation of what tables the kids who proudly identified as gay, bi, trans and even pan gravitated to. When all the racial partitions and social segregations were fully explained, I took a deep breath and tried to sound nonchalant.

“And so, where do you sit?” I asked. She shrugged her shoulders and rolled her eyes. Her answer was clear. It was none of my business.

Steve Majors has just completed a memoir on race, identity and family ties.