Nelson said the plan for the OUWB First Aid First Chapter is to train as many individuals as possible in how to respond quickly and confidently during real-life medical emergencies. He said training is very similar to that provided by the Red Cross’s Stop the Bleed campaign — minus the cost.

“First Aid First is not so much about us providing a service, but us empowering community members to provide a service to their respective communities,” Nelson said.

In doing so, Halder said the program essentially accomplishes two things: meets a community need, and provides valuable experience to medical students like her who are interested in community medicine.

“Both of those reasons had me wanting to bring First Aid First to OUWB,” she said. 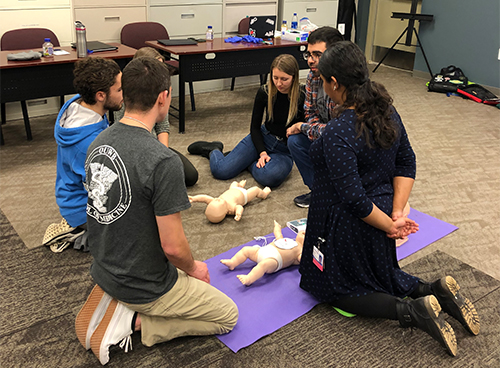 Annually in the U.S., there are about 400,000 cases of cardiac arrest that occur outside of a hospital setting. According to the 2018 report from the American Heart Association, the national survival rate for such cases is 10.8 percent.

In the early 2000’s, the survival rate for these cases in the city of Detroit was historically low at less than one percent.

The medical community responded by making conscientious efforts to educate and empower citizens to recognize and respond to these events, resulting in increased survival rates.

One of the ways the local medical community responded was through formation of First Aid First in 2017 by physicians at Detroit Receiving Hospital and students at Wayne State.

With a physician and/or resident present, First Aid First provides free, lifesaving training on CPR, AED use, and other basic emergency response skills. There are no specific requirements for those seeking training from First Aid First. (For example, Nelson said he participated in training for members of the Detroit Symphony Orchestra.)

Halder said her first experience with First Aid First was as a volunteer. Through that exposure, she said, she learned that there was a need for such training in Pontiac.

It’s the kind of need that was similarly identified by the planners behind OUWB’s Street Medicine program that launched in November.

Nelson said the best way to compare the two new programs is to think of First Aid First as a proactive approach to preventing medical events whereas Street Medicine is reacting to existing conditions and/or issues.

“People don’t know what to do when there’s a health crisis,” said Virginia Uhley, Ph.D., assistant professor in OUWB’s Department of Foundational Medical Studies, and one of the program’s mentors. “This provides them with some of those skills, and it also helps medical students gain a better understanding.” 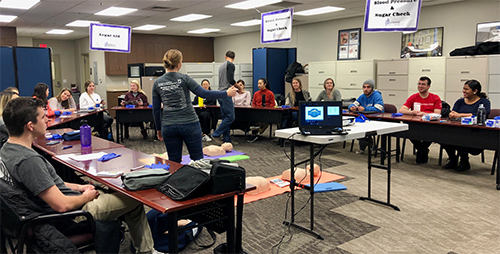 Halder and Nelson began the process of launching a First Aid First chapter at OUWB by meeting with Kristiana Kaufmann, M.D., co-director, Wayne State’s Global Health Alliance, and OUWB faculty members during the summer of 2019.

Read More:  When and why is pain pleasurable?

Subsequently, they secured the support of two mentors: Uhley and Stephanie Goike, M.D., an attending physician in emergency medicine at Beaumont Hospital, Royal Oak, and OUWB Class of 2015.

As a chapter, OUWB participants have access to the materials and training methods established by Wayne State’s program. Other resources will be shared, too, Uhley said.

“It’s been a very collaborative event, which I think has been one of its positives,” Nelson said, noting that the OUWB chapter will “add on things that we see work well for the audiences that we’re trying to reach.”

The Gary Burnstein Community Clinic, a Pontiac-based nonprofit that provides free medical care to the uninsured, has agreed to allow future training of OUWB students who will participate in First Aid First.

In mid-November, the first group of more than 20 such students (M1s and M2s) took part in the first official training session for OUWB’s First Aid First chapter.

They began community outreach in early December, and plan to offer their first training sessions in early 2020.

In a year, Nelson and Halder said they hope the program will be well-established with an increasing role in the community.

“It’s a really good opportunity for (medical students) to get up close and personal with community members in Pontiac, and teach them something they can really use,” he said.

Additionally, Uhley said she wants the OUWB medical students who participate to gain a better understanding of what it’s like to teach others.

“And I hope (the medical students) leave the program with feelings of empowerment and competence…that they have something they can contribute to a community,” she said.