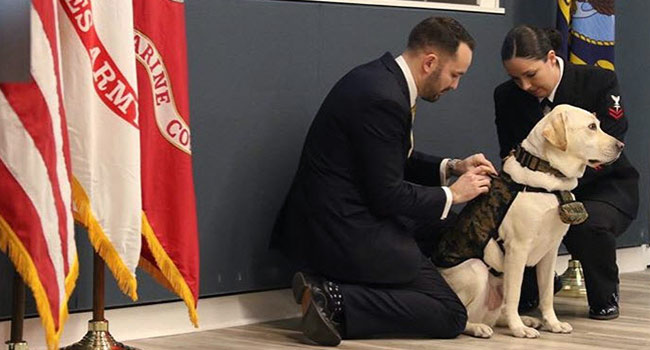 In a ceremony livestreamed on Facebook, Sully was sworn in as a Navy hospital corpsman second class. Sully sat at attention through the oath, which charged him to “support, comfort, and cheer our warriors and their families, active duty and retired.”

Along with his new title, he received a new vest signifying his rank. He will be joining a team of six other service dogs at the facility.

Named for Chesley “Sully” Sullenberger, the pilot known for safely landing US Airways flight 1549 in the Hudson River in 2009, Sully served President Bush for 6 months, until Bush’s passing in November.

Sully made headlines and warmed hearts in December when he kept watch over Bush’s casket. A photo of the moment went viral on Instagram.