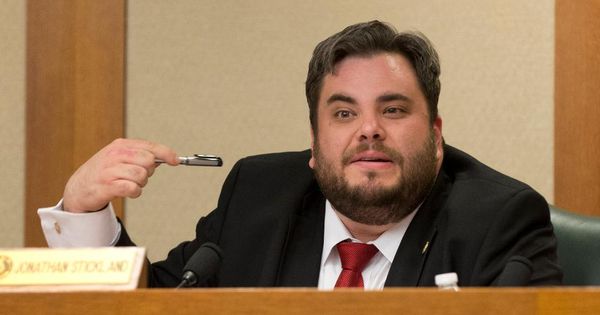 Peter Hotez, MD, PhD, has accomplished a lot in his life. He’s well-known around the world for doing many, many very positive things. However, casting magical spells is not one of them.

Hotez is the founding Dean of the National School of Tropical Medicine and a Professor at the Baylor College of Medicine. He has been a pioneer in bringing more attention to and leading the fight against neglected tropical diseases. He and his team have been developing ways to protect people, especially those who live in extreme poverty, against different major diseases, ranging from human hookworm disease to Chagas Disease. His work has benefited countless people across the globe. He is an accomplished scientist and has been a fabulous collaborator of our Public Health Computational and Operations Research (PHICOR) team.

Yet, Rep. Jonathan Stickland, a Republican member of the Texas House of Representatives from District 92, used the word “sorcery” in the following Twitter exchange with Hotez:

Make the case for your sorcery to consumers on your own dime. Like every other business. Quit using the heavy hand of government to make your business profitable through mandates and immunity. It’s disgusting.

Yes, Stickland said the word sorcery, not saucer-y, not saucy, not source-of-ee, but sorcery. What in Harry Potter’s name was Stickland talking about? Well, he was responding to the following Tweet from Hotez:

New #vaccine exemption @TexasDSHS numbers tell much of the story. I’ll tell the rest: Children of #Texas have been placed in harm’s way for the financial gain of special & outside interest groups. Calling on our TX elected leaders to say “NO MAS” and stand up for our children! pic.twitter.com/60coHonYtx

How does one get off or maybe Gandalf using the word sorcery in this case? Hotez was trying to encourage use of one of public health’s greatest achievements, and Stickland came back with the word sorcery. As you can see in the Twitter exchange, Stickland had suggested that Hotez was being paid by the pharmaceutical industry to make positive statements about vaccines. To this, Hotez responded:

Wow that’s impressive, from a member of the Texas House of Representatives. Sir, as you know, I don’t take a dime from the vaccine industry. I develop neglected disease vaccines for the world’s poorest people. And as a Texas pediatrician-scientist it is most certainly my business

Hotez has been developing vaccines for infectious diseases that disproportionately afflict many lower income populations around the word. Hotez has had to do this because pharmaceutical companies haven’t felt that such vacccines would be sufficiently profitable. Thus, in the words of Alanis Morissette, “isn’t it ironic” that Stickland made those claims about Hotez. (To be clear, Morissette did not sing about Stickland, but just sang the words, “isn’t it ironic.”)

Dr. Peter Hotez, Dean of the Baylor College of Tropical Medicine, shows areas of Houston’s 5th Ward that may be at high risk for mosquitoes capable of transmitting the Zika virus in Houston. (AP Photo/John Mone)

After David Gorski, MD, PhD, the Editor of Science-Based Medicine, saw Stickland’s “business” contention about Hotez, Gorski jumped by adding, “Ah, yes, the pharma shill gambit. It’s what antivaxers resort to when they have no science, which is always.”

To Gorski’s statement, Stickland tweeted, “Look, another guy in a white coat who thinks he’s a better parent than everyone else! #shocking #notreally Why do you want to run my life and own my kids?”

This was a bit reminiscent of the Seinfeld episode where Izzy Mandelbaum said, “Oh, you think you’re better than me,” to Jerry Seinfeld after Seinfeld gave no real indication that he thought he was “better” than Mandelbaum. How many doctors have claimed that they are better parents than everyone else? If anything, I know a number of doctors who fret about not being able to see their children because they are working so hard and being swallowed up in seas of paperwork.

Moreover, how many people are really interested in running Stickland’s life or owning his kids?

The spellbinding Twitter battle continued with Stickland tweeted, “Vaccines are dangerous, don’t you agree?” If Stickland was expecting a chorus of agreement, instead, a number of people responded with variations of the word “no.” Maybe Russian bots hadn’t prepared yet for the battle?

The big question is whether Stickland truly believes all of what he said or if he is simply injecting vaccines into politics. Only Stickland really knows for sure, unless a sorcerer can cast a mind-reading spell.

With so many people out there trying to profit off of selling unnecessary or even harmful things, why go after Hotez, who has dedicated much of his career to addressing neglected tropical diseases, diseases of poverty? It seems like time and resources are better spent targeting those who are really cheating others, spreading falsehoods to the public, polluting our environment, putting garbage into our food system, getting people hooked on harmful things, and doing other things to harm our population just to make money.

With so many other issues and threats to deal with, isn’t it strange, or perhaps Dr. Strange, that Stickland chose to target vaccines and Dr. Hotez?