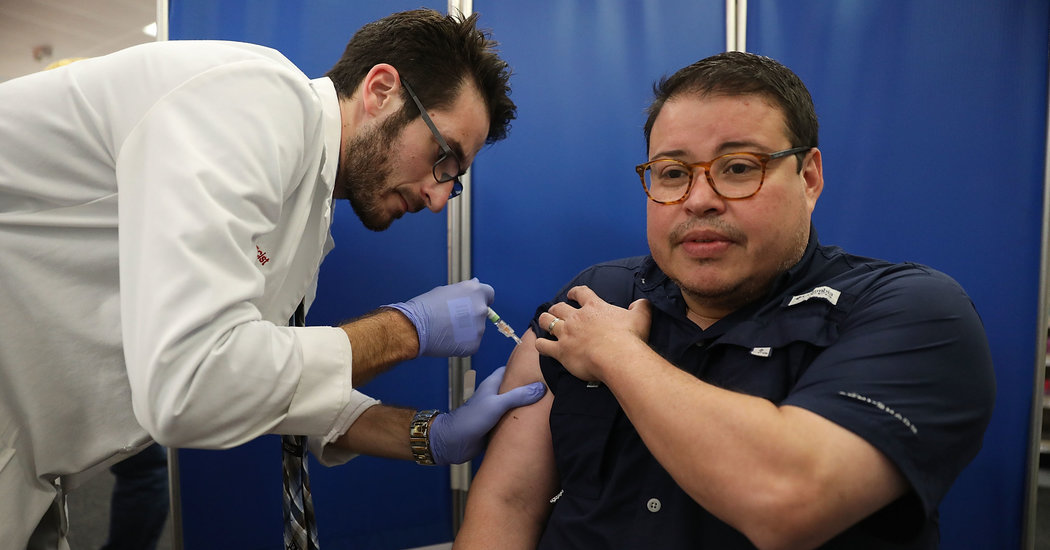 The flu season is going strong.

About six million to seven million people in the United States have come down with the illness so far, with half of them sick enough to have seen doctors, according to estimates released on Friday by the Centers for Disease Control and Prevention.

“Flu activity is widespread in many states,” Dr. Alicia Fry, from the C.D.C.’s influenza division, said in an interview. “We expect several more weeks of flu season.”

The C.D.C. is not affected by the government shutdown.

The last flu season, from 2017 to 2018, was particularly deadly, with the most cases reported since 2009, and the illness considered severe across all age groups. Nearly 80,000 people died in the United States.

The number of deaths from flu this season has not yet been determined. But Dr. Fry said the flu was widespread in 30 states, especially in the Southeast, and is moving northward. Levels are also high in New York City and New Jersey.

And the number of hospitalizations so far this season “is a reminder that flu can cause severe illness,” Dr. Fry added.

Despite the warnings, many people still do not realize how dangerous the flu can be. The death last month of Bre Payton, 26, a writer for a conservative online newsmagazine and a guest commentator on the Fox News Channel, came as a shock to many. She died after becoming ill with the flu and developing encephalitis, a brain inflammation.

Read More:  How many days since i quit smoking

The very young, the very old, pregnant women and people with underlying health problems have the highest risk of becoming seriously ill and needing hospitalization for the flu, according to the C.D.C. In healthy people, the sickness usually lasts three to five days, but the cough can linger.

“It’s really not too late to get vaccinated,” Dr. Fry said.

The vaccine needs about two weeks to take effect, she said, but is still worth getting because the flu season is expected to drag on longer than that. The effectiveness of this year’s vaccine is not known yet, but in past years, Dr. Fry said, vaccination against the same type of flu that is now circulating — known as H1N1 — was about 50 percent to 60 percent effective at reducing the likelihood of a person needing to visit the doctor with symptoms.

Antiviral drugs, available by prescription only, can shorten the illness slightly and lessen its severity, but they work best if taken as early as possible after symptoms appear. In a statement, the C.D.C. said, “People who are very sick or who are at high risk of serious flu complications and get flu symptoms should see a health care provider quickly for possible treatment with a flu antiviral drug.”

Although influenza has already caused deaths this season, the figure has not been released because there is not enough information yet to make a reliable estimate, said Carrie Reed, who led the applied research and modeling team that produced the estimates.

Nor is it possible to determine how this flu season compares with others based on these numbers, as this is the first time that the C.D.C. has provided flu estimates while the season is still underway. In the past, the totals were released after the flu season had ended.

Read More:  Australia Just Had a Bad Flu Season. That May Be a Warning for the U.S.

Dr. Fry said her team had decided to gather and report the numbers early because they realized that people found the data useful. From now on, updated totals will be published every Friday in the C.D.C.’s weekly FluView report.

Dr. Fry said it was not possible to use the current estimates to project what the total number of cases might be this season.

“We are very actively pursuing methods to forecast what could be happening in the short term and when the season might peak,” Dr. Fry said. “We won’t know for several more weeks whether it’s peaked.”

The estimates are based on data collected from a surveillance network that counts flu-related hospitalizations in parts of 13 states scattered around the country, covering about 27 million people, or 8.5 percent of the nation’s population.