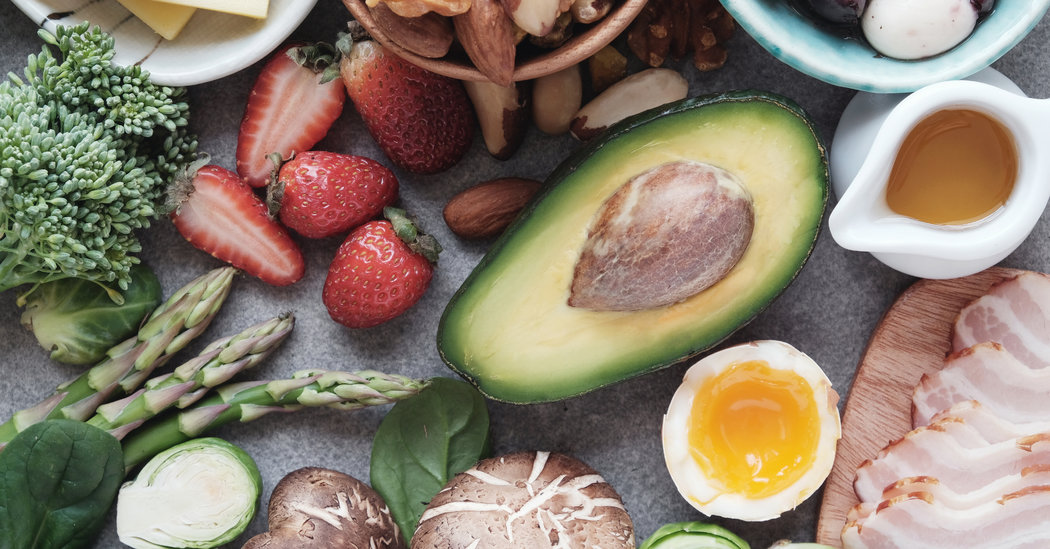 Low-carbohydrate diets have fallen in and out of favor since before the days of Atkins. But now an even stricter version of low-carb eating called the ketogenic diet is gaining popular attention, igniting a fierce scientific debate about its potential risks and benefits.

Both the Atkins and ketogenic diets encourage followers to cut carbs from their diets. But while the Atkins diet gradually increases carbs over time, keto places firm limits on carbs and protein. This way of eating depletes the body of glucose, forcing it to primarily burn fat and produce an alternate source of fuel called ketones. A typical ketogenic diet restricts carbs to less than 10 percent of calories and limits protein to 20 percent, while fat makes up the rest.

The keto diet has been popularized in best-selling books, promoted by celebrities and touted on social media as an antidote to various ailments. Proponents say it causes substantial weight loss and can help those with Type 2 diabetes dramatically improve their blood sugar levels, which fall when people avoid carbs.

There have been many studies of the ketogenic diet over the years, but most have been small and of fairly short duration. A federal registry of clinical research shows that more than 70 trials looking at the diet’s impact on brain, cardiovascular and metabolic health are either underway or in the beginning stages.

Dr. Ethan Weiss, a researcher and preventive cardiologist at the University of California, San Francisco, had long been skeptical of low-carb diets but decided to experiment with the ketogenic diet a couple years ago. In a typical day he skips breakfast and eats mostly salads, nuts, cheese, roasted vegetables and grilled chicken, fish or tofu, as well as dark chocolate for dessert. The result, he says: He lost 20 pounds and had to buy a new wardrobe.

“I haven’t felt this good since I was in high school,” he said.

Dr. Weiss subsequently started a company and a weight loss app with a former Weight Watchers vice president, raised $ 2.5 million from a group of Silicon Valley investors and started selling a $ 99 pen-size breathalyzer device, called Keyto, that allows users to measure their ketone levels and track how the diet is working for them.

“Our mission is to make doing this diet easier and more sustainable so people can make changes that allow them to lead a healthier lifestyle,” he said.

But the ketogenic diet has no shortage of detractors. Some doctors and health experts say it can lead to quick weight loss but that it is no more effective than other diets in the long term. And many say they find it worrisome because it encourages foods high in saturated fat, which have been linked to heart disease, while restricting nutrient-rich foods supported by decades of research, like beans, fruits, starchy vegetables and whole grains.

Last month, three doctors published an essay in JAMA Internal Medicine cautioning that the enthusiasm for the diet as a treatment for obesity and diabetes “outpaces” the evidence. They pointed to studies suggesting that it had little advantage over lower fat diets for blood sugar control, and that it could cause adverse effects like constipation, fatigue and, in some people, an increase in LDL cholesterol particles, a risk factor for heart disease.

“The greatest risk, however, of the ketogenic diet may be the one most overlooked: the opportunity cost of not eating high-fiber, unrefined carbohydrates,” the authors wrote. “Whole grains, fruits and legumes are some of the most health-promoting foods on the planet. They are not responsible for the epidemics of Type 2 diabetes or obesity, and their avoidance may do harm.”

Dr. Shivam Joshi, a co-author of the piece, said it generated a flood of emails from people across the globe. Some expressed praise and support, while others offered condemnation, a sign of just how polarizing the diet can be, said Dr. Joshi, an attending physician at NYC Health + Hospitals/Bellevue and a clinical assistant professor at New York University medical school.

“It’s a hot-button issue, and this paper struck a chord,” he added.

While the ketogenic diet can seem like the latest in an endless stream of fad diets, it has a long history of therapeutic uses. Diabetics routinely practiced carb restriction before the discovery of insulin in the 1920s, and doctors at Johns Hopkins and other hospitals have used the diet for almost a century to reduce seizures in patients with epilepsy.

One of the benefits of carb restriction is that blood sugar levels remain stable after a meal, resulting in lower levels of insulin, a hormone that causes weight gain, said Dr. David Ludwig, an endocrinologist at Harvard Medical School and the author of a best-selling book on low-carb diets.

“Insulin is like a Miracle-Gro for fat cells,” he said. “By lowering insulin levels, fewer calories from the meal may get stored in fat cells, leaving more to fuel metabolism and feed the brain. As a result, you may feel fuller longer after eating.”

In a series of studies over the years, Dr. Ludwig has found that low carb diets cause people to burn more calories and lose more weight compared to lower fat diets. According to the carb and insulin theory of obesity, whole grains, starchy vegetables and tropical fruits are more healthful than processed carbs. But they can still cause swings in blood sugar and insulin after a meal, and that can be particularly problematic for people with diabetes, said Dr. Ludwig.

In May, the American Diabetes Association published a consensus statement on nutrition strategies for people with diabetes. It found that a variety of diets rich in unprocessed foods, like the Mediterranean and vegetarian diets, could help people prevent and manage the disease. But it also concluded that reducing overall carb intake “has demonstrated the most evidence” for improving blood sugar control.

“Carbohydrate is the macronutrient that most contributes to your blood sugar, and so it makes sense that reducing it is going to give you the biggest bang for your buck,” said the lead author of the report, Dr. William S. Yancy, Jr., an associate professor at Duke medical school and the director of the Duke Diet and Fitness Center.

But the carb and insulin explanation for obesity is the subject of much debate. Scientists at the National Institutes of Health have published research showing that people actually burn more calories on low-fat diets, and many experts contend that in the end, people will lose weight on any diet so long as they consume fewer calories.

Ultimately it is hard to reach definitive answers on any diet because nutrition studies tend to be short-term and not very rigorous, and there is tremendous variation in how people respond to different diets, said Dr. Steven B. Heymsfield, the president of the Obesity Society and the director of the Body Composition-Metabolism Laboratory at the Pennington Biomedical Research Center in Baton Rouge, La. Studies show that while some people who adopt a very low-carb diet experience a significant increase in their LDL cholesterol levels, for example, others see little or no change at all.

Dr. Heymsfield said he recommends a few things to people who try the ketogenic diet. He suggests limiting foods high in saturated fat like butter, meat and cheese and focusing on foods with unsaturated fats like olive oil, seafood, nuts, chicken and avocado. Consult a dietitian or doctor for their guidance, he said, and ask yourself if you are willing to commit to the diet for the long term.

“You have to set down a lifestyle and a healthy eating plan that you think you can adhere to for the rest of your life, because these things only work while you’re doing them,” he said.