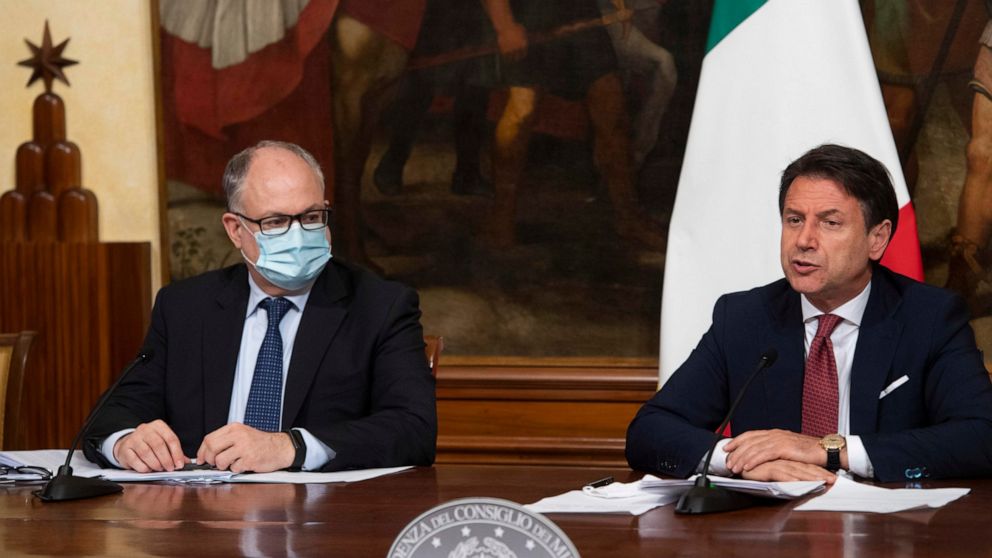 MILWAUKEE — Nine fraternities and sororities are under quarantine at the University of Wisconsin-Madison after 38 students tested positive for the coronavirus.

The orders from UW-Madison and Dane County health officials affect 420 Greek life students, who have been instructed to quarantine for two weeks, the Milwaukee Journal Sentinel reported.

UW-Madison is requiring coronavirus tests for students who live in the 38 Greek life houses. The university didn’t say if the cases were linked to parties or large gatherings.

So far, 440 UW-Madison students have tested positive for the virus, according to the university.

HERE’S WHAT YOU NEED TO KNOW ABOUT THE VIRUS OUTBREAK

— Colleges using coronavirus dorms, quarantines to keep virus at bay, with the virus spreading through colleges at alarming rates.

— Staying connected during the coronavirus pandemic has been trying for parents and students at a Phoenix school for refugees who speak more than a dozen languages.

HERE’S WHAT ELSE IS HAPPENING:

ROME — The daily number of coronavirus deaths in Italy has been rising, with 16 registered Saturday by the Health Ministry.

That’s five more than the previous day. However, those numbers are dramatically lower than in the early weeks of the pandemic in the nation, when hundreds of people were dying daily.

With nearly 1,700 more cases Saturday, Italy has confirmed a total of 276,338 infections. Most of the recent cases have been linked to popular holiday locales, particularly among those who vacationed on the island of Sardinia.

ROME — The personal doctor of Silvio Berlusconi has expressed “cautious but reasonable optimism” for the former Italian leader’s recovery from the coronavirus.

The 83-year-old Berlusconi is hospitalized in Milan after testing positive this week.

Zangrillo said Friday, several hours after Berlusconi was admitted to San Raffaele hospital, that his patient has an early stage lung infection and was breathing on his own.

LONDON — The head of Britain’s civil service is telling public sector bosses to get staff back to the office, as the government seeks to revive city centers.

Cabinet Secretary Mark Sedwill has written to government department chiefs “strongly encouraging an increased workplace attendance” and saying 80% of civil servants should be working from the office at least part-time by the end of September.

The government urged people to work from home when the country went into lockdown in March to slow the spread of the coronavirus. Society is gradually reopening, but many people remain reluctant to return to workplaces and public transport. That’s bad news for downtown cafes, shops and restaurants that rely on commuters for trade.

The number of new coronavirus infections in the U.K. is rising. Unions say the need for social distancing makes a full-time return to offices impractical.

Dave Penman, head of civil service union FDA, says the government needs to accept that the world of work had changed for good.

ROME — Italian Premier Giuseppe Conte says he has no words for those who deny the coronavirus pandemic – except to look at the numbers.

Pandemic deniers and those against masks and vaccines are expected to rally in Rome on Saturday. Conte said: “To those people gathering in Rome today and who think the pandemic doesn’t exist, we reply with numbers: More than … 274,000 infected and some 35,000 dead. Period.”

The daily case load, after dropping down to below 200 at the start of summer, surpassed more than 1,700 on Friday, the biggest one-day increase since early May.

Many of the recent infections have occurred in returning vacationers, most of them young people. Conte says, “if things go badly, we’ll be able to intervene in a targeted and very circumscribed way” to manage any dramatic surge.

His country was hard hit when the outbreak first erupted in Europe and went into lockdown. Italy has confirmed nearly 275,000 coronavirus cases and counts 35,518 known dead.

BERLIN — Germany wants to boost its public health system with 5,000 new jobs and 4 billion euros ($ 4.735 billion) in investment to get the country’s 375 local health offices up to speed.

The announcement by Health Minister Jens Spahn on Saturday came after a meeting with the country’s 16 state health ministers about the coronavirus pandemic. Germany wants to add are at least 1,500 new doctors, medical and administrative staff by the end of next year.

Meanwhile, German President Frank-Walter Steinmeier has suggested the country mourn the victims of the coronavirus pandemic at an official memorial. Steinmeier told newspaper group RND on Saturday “we must help people who are mourning and think about how we can express our compassion.”

The German president, whose office is mostly ceremonial, says he was in talks with other officials regarding a memorial.

On Saturday, Germany registered 1,378 new coronavirus infections for a total of nearly 249,000 cases. Total deaths stand at more than 9,300 people, according the country’s disease control center.

That allows for expelling them without the chance to seek refuge in the United States, a new policy the government has enacted during the coronavirus pandemic.

U.S. District Judge Dolly Gee ruled Friday the use of hotels violates a two-decade-old settlement governing the treatment of immigrant children in custody. She ordered border agencies to stop placing children in hotels by Sept. 15 and to remove children from hotels as soon as possible.

At least 577 unaccompanied children who crossed the U.S.-Mexico border since March have been held in hotels, sometimes for weeks, according to government data.

That’s instead of sending them to shelters operated by the Department of Health and Human Services, where minors receive legal services, education, and the chance to be placed with relatives living in the U.S. Those facilities are licensed by the states where they are located.

More than 13,000 beds in HHS facilities are currently empty.

VATICAN CITY — Pope Francis will visit Assisi next month, in his first visit outside Rome since the coronavirus pandemic.

He’ll journey to Assisi, the birthplace in the central Italian region of Umbria of his namesake saint. He’ll sign an authoritative papal letter to clergy and faithful worldwide, the Vatican said Saturday. The encyclical is expected to stress the value of brotherly relations during and after the pandemic, a theme Francis evoked repeatedly during the pandemic.

Francis has stressed the coronavirus reveals the fragility of existence and the importance of helping one other, especially the poor.

Italy was put under lockdown in early March when it became the first country in Europe to feel the full brunt of the coronavirus.

PRAGUE — The number of people infected with the coronavirus has continued to surge in the Czech Republic, surpassing 700 for the first time.

The Health Ministry says the day-to-day increase reached a record of 798 new confirmed cases on Friday.

The announcement comes after the country registered over 600 cases the previous two days, also records at the time.

Health authorities have already imposed new restrictive measures in the Czech capital, reacting to the spike. Starting on Wednesday, it is mandatory again to wear face masks in stores and shopping malls. At the same time, bars, restaurants and nightclubs have to be closed from midnight to 6 a.m.

MEXICO CITY — The coronavirus pandemic has hit Mexico so hard that the governments of several states ran out of death certificates.

Officials said Friday the federal forms started running out about 15 to 20 days ago in at least three states — Baja California, the State of Mexico and Mexico City.

Authorities say a million new forms have been printed and are being distributed. The certificates are printed with special characteristics because falsification has been a problem in the past.

Mexico has suffered the fourth-highest level of COVID-19 deaths in the world. On Friday, the number of confirmed cases rose by 6,196 to 623,090, while deaths rose by 522 to 66,851. Cases in Mexico now appear to have plateaued and are no longer decreasing.

SEOUL, South Korea — South Korea has reported 168 new cases of the coronavirus, the third consecutive day the daily jump came below 200 in a possible sign the country is starting to see the effects of unprecedented social distancing restrictions.

The figures released Saturday brought the national caseload to 21,010, including 333 deaths.

Officials say 115 of the new cases were in the Seoul metropolitan area, home to half of the country’s 51 million population. Infections were also reported in other big cities, including Bunsan, Gwangju, Daejeon and Daegu.

Authorities have decided to extend for another week tougher social distancing restrictions in the Seoul area, saying the viral spread is still at risky levels. Restaurants are allowed to provide only takeout and home delivery after 9 p.m. Gyms, billiard clubs and after-school academies are closed.

Officials have also shut down churches and nightspots and shifted most schools back to remote learning nationwide.

NEW ORLEANS — Louisiana athletic and education officials are cautiously planning for high school football games to begin in October, while Gov. John Bel Edwards is expressing hope he will be able to ease some restrictions on businesses next week.

State officials, leaders of the Louisiana High School Athletic Association and lawmakers discussed plans for resuming football at a meeting Friday amid positive trends in the state’s coronavirus statistics.

Later in the day, Edwards made no commitment to ease restrictions that have limited public gatherings and restaurant seating while shutting down bars since July. But, noting that current restrictions expire next Friday, he said he hopes he will be able to move to less restrictive regulations. He didn’t give any details on what looser rules might allow.

SANTA FE, N.M. — New Mexico officials say enrollment in Medicaid has increased by nearly 7% in the state since the outset of the coronavirus pandemic, with employers shedding jobs and more families entering into poverty.

At the same time, he says the current 6.2% boost in federal matching funds is inadequate to keep up with rebounding demand for medical services under Medicaid and could end abruptly at the discretion of federal health regulators.

WASHINGTON — President Donald Trump is urging Americans to “remain vigilant” about the coronavirus over the Labor Day weekend.

Trump said at a White House briefing Friday that “we need everybody to be careful” and to “apply common sense” in their interactions with one another.

Dr. Anthony Fauci, the nation’s top infectious disease expert, said this week that several Midwestern states that have seen jumps in coronavirus caseloads should be especially vigilant during the holiday weekend. They are North Dakota, South Dakota, Arkansas, Iowa, Illinois, Indiana and Missouri.

Past increases in cases of COVID-19 have followed the Memorial Day and Fourth of July holidays.

Trump is eager to put the pandemic in the past, but he tells Americans to “let’s just try to get through this one weekend.”